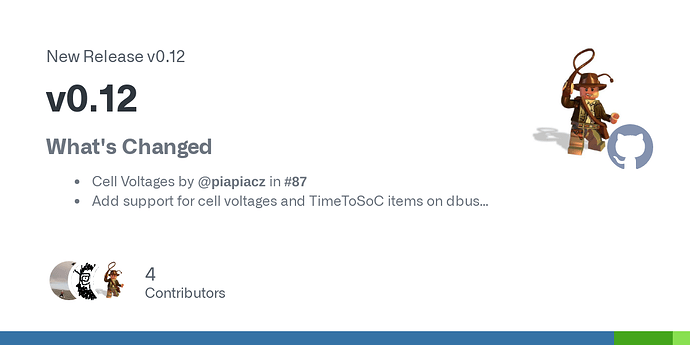 The big changes are for fixing issues experienced with the driver on 2.80/2.90 firmware interfering with other devices, Tian/Revov BMS support and fixes for Daly BMS values.

One more thing - are those Qucc BMSs supported? 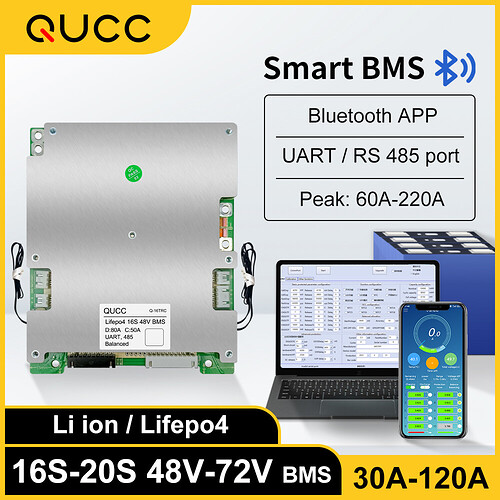 Yes you can go to newer venusos firmwares now.

QUCC are just relabling other BMS.
This one in you link is a JBD (the app is the give away), so it will work.
I have another QUCC here that it actually an AXE BMS that is not supported yet, so you cannot go by QUCC in general and need to make sure.

Someone advise on BMS calibration. Is it needed to be performed in general, how to understand it is needed to be done or it is best to do it anyway during initial battery build?

I am doing exactly that now and charged the pack (16x105Ah LiFePo4) to some stage with the first BMS I ordered (not supported by the driver) and now I will change it to finish the charge with the JBD-SP25S003 (16s, 100A) which I plan to use as final in the system with the driver.

I am curious whether to perform the voltage and current calibration at this initial “on-bench” stage and does it worth doing that with the potential of screwing something up.

I don’t suggest you do a calibration. Rather keep it as it is. If you don’t compare this with something it will work great.
Your BMS will be calibrated already and that should be good enough.
If you are someone that like to squeeze every last 0.01A out of your 10 000Ah battery then by all means go ahead. (but then you should have bought that $10 000 BMS instead of the cheaper option

)
The JBD is one of the better options so I would not bother. Rather put more effort into making sure your cells are all well balanced.

For that, on the JBD your will find 2 balance settings. Balance Enable & Charge Balance
Balance Enable should be ON.
(I cannot remember exactly which way the Charge Balance should be - you will have to check)
In the one Charge Balance setting the cells are ballanced only when they are being charged and the other way only when they are being Discharged.
Normal operation you want to ballance on charge only or else the cells will deplete when just standing there, but this is a great option to do that balancing before you install the battery. Charge the battery up to full capacity - you might see some cells being high and other not - just stop when the first one reach cut-off, switch to balance in discharge and leave the Battery for a few days. Every day or two you can top up it again until you see they are balanced. The close to balance you start the shorter time this will take.
Just remember to switch the Balance on Charge only before you start using the battery

Hi, i have make some progress and now i can monitor 3BMS eqch connected by usb to hub.
One is 135Ah and two 105Ah battery setups. Driver can set capacity i remeber and becuase i use at first one 135Ah i set 135Ah now on rest 105Ah says capacity 135Ah available 105Ah it means Daly send capacity what is set in BMS. In deiver set 0 to get real from BMS for each connected battry setup?

Related to @Janekx concerns, I am also wondering what is the purpose of the so called “Cycle capacity” in JBD which they recommend to be set to 80% of series cell design capacity (t.e. for 100Ah cell to be set to 80Ah). According to the description this parameter is used to calculate the state of charge of the pack.
I can imagine that if you set your charge/discharge voltages (in the charger, Multi, and the GX driver) so you can use around 90-95% of your battery capacity, if the BMS report this cycle capacity parameter (80% capacity) to the GX via the driver, those values will be interpreted by the GX either not letting you to use the desired high capacity, or simply the SOC information will not be correct.

Can someone reveal the mystery (probably due to my confusion) around this and whether it has some result on the system operation.
Is it good idea to set this either the same as the design capacity or the capacity that you are planning to use?

Strange behaviour. The lowest BMS is 135Ah others two 105Ah. One will think it is get quite same power from each of batt and voltage seems like but SoC says too big diferent. 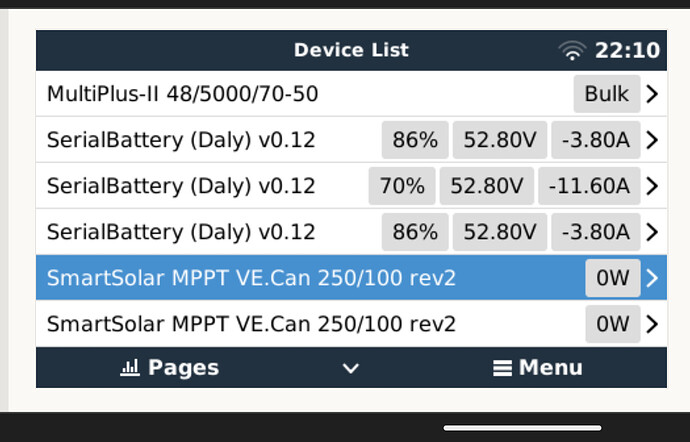 Im experiencing issues with other ve.direct components on venusos 2.87 with version 0.12.

the serial rs232 ve.direct disconnect all the time and get picked up as random/wrong serialbattery bmses.

is there any way to force serialbattery to only use a specific dev like /dev/ttySB and not try and open all my ttyusbs?

i map my bms though a udev rule and would like the driver only to use this device and ignore all others.