I’ve created a driver for Victron GX devices (anything running VenusOS, like the Raspberry Pi of VenusGX) that interface with a serial battery BMS(something communicating on RS232 or RS485 serial). Bluetooth serial does not work yet, as the Pi’s bluetooth is disabled and the VenusGX does not have bluetooth.

I don’t sell the BMS and there are no warrantee on the driver. It is free. Gratis.

dbus driver for serial battery in VenusOS . Contribute to Louisvdw/dbus-serialbattery development by creating an account on GitHub.

Currently it works with

These are the values that is populated in the Venus device from the driver. (This is from an LLT BMS. Other BMS’s might not have all the data available) 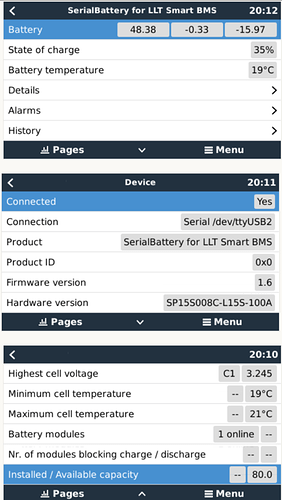 I’m looking for people willing to help with testing this driver for other BMS like AntBMS and Daly.

You don’t need lots of technical know how, but that might help. (You will need to connect the battery using the serial cable to the GX device and run some Python scripts on there)

@Louisvdw are you in Cape Town side of the world?

That depends how big the sides are

Wel, dit is nog steeds in die grense. hahahahaha!!! HHHMMMMmmmmmmm, I wonder I wonder. I got a 3de ANT Smart BMS that arrived after 7 months in slow mail that I want to build in my 3de battery bank. maybe maybe we need to test this.

maybe maybe we need to test this

If you have a Pi 2/3 laying around, then that would be all we need. You don’t really need a Victron inverter, just the GX device (which you can install on a Pi thanks to @plonkster)

does it have to be a pi running the os or can it be an actual gx device?

Anything with a USB port that runs Venus-OS will work. In other words, any GX will work.

does it have to be a pi

Jip!!! Not in the blue side but in the Big Grey side. Hahahahahaha. MLT. And some Microcare Mppts that I’m planning to sell and get a something better.

@Louisvdw I am still waiting for my AntSmart BMS, once I have it, I will give you some feedback

ok will keep this in mind for sure.

I want a BMS that:

And my logic says:

And all the above, delivered, for $110.50 excl SA taxes and goeters, who is going to argue.

O, that brings an idea to mind: If anyone else wants to also get one, I can increase my order.
It is a risk, can stand to lose some money, but it is with Alibaba’s Trade Assurance - if that means anything.

Trialing a new feature for the driver at the moment. Reducing the charge/discharge current limits when reaching the upper/lower limits of the battery SOC. 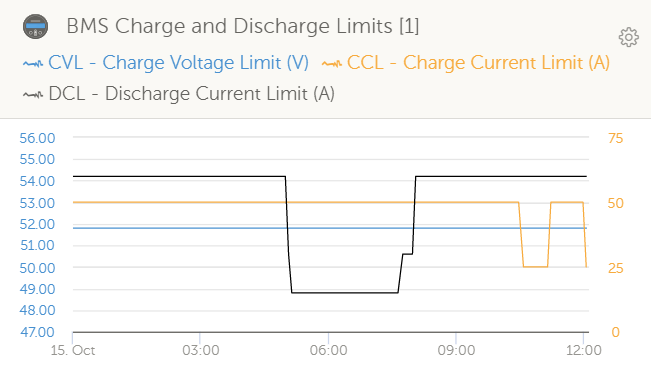 This is all good and well, just something I want to note: When you enable the option to feed excess DC-coupled PV into the grid, the CCL will be ignored and the MPPTs will remain unlimited. So while many batteries use a CCL, getting the voltage control part right is the most important (in a Victron system at least).

I’m still working on my voltage control function.
The problem is that I have 1 bad cell (#10) that freaks out while the rest is still at 3.34V and it makes testing my function almost impossible. Once I replace the cell my Voltage control can be enabled for testing. 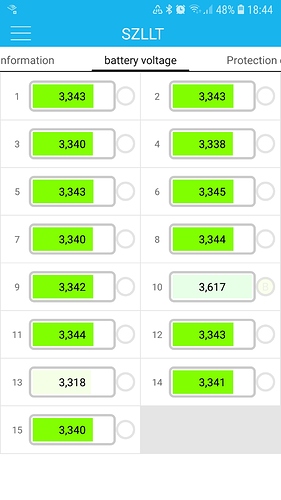 That’s not necessarily a bad cell. I see this sort of thing frequently with new batteries. After a few weeks, the other 15 cells finally catch up (slowly pulled up at whatever small current the BMS supports). While this is quite frustrating, the truth is also that if the BMS has more bypass/transfer capabilities, you’d be paying more for it… and then use it exactly once (when the battery is new).

slowly pulled up at whatever small current the BMS supports

That is what I thought initially as well, but it’s been 6 months x 50mA balancing and I can’t see any improvement.
Cell #10 is also only the highest cell after 80Ah. Before that it is just one of the average members. Either a bad cell, or a lower capacity cell to the rest.

My cells and BMS have arrived, I will start the building process this weekend and report once I am done

Cell #10 is also only the highest cell after 80Ah. Before that it is just one of the average members. Either a bad cell, or a lower capacity cell to the rest.

Have you tried simply removing the cell, cleaning terminals, and reassembling? This fixed the imbalance issues in my pack. In one case the terminal surface was damaged, so I included a tinfoil ‘washer’ for a compliant mating surface.

You might be surprised by how the tiniest connection resistance affects cell voltage measurement.