Is there a guide how to connect both BMS to GX to monitor both batteries?

Hi @Janekx
At the moment the multiple bank is not yet supported. You can follow the ticket to get updates when that is released.

For now if you want a bit of support for more than one battery bank, you will have to be on VenusOS V2.73 or lower. You can then see both BMS in the details of the Remote Console, but only one will show in the dash and published to VRM. Also only the one will be your battery manager. There is no way to choose which one.

Thanks for fast reply, so the safety solution is now to buy what to monitor batteries? For first BMS and SmartShunt for second?

If both batteries are ballanced and you are confident that you will not get alerts from the one battery and not the other, then you can safely use them with only the one being published. Their SOC should move up and down similarly and your system will behave. Just make your Min SOC% a bit higher. I have been running my test system like that with no issues for a few months.

If you want a good state of charge measurement, the best bet is a SmartShunt. The BMS then simply protects the battery (which is it’s main job).

CerboGX has 2 USB ports is there way to connect each BMS with own USB port and in driver set diferent USB adress ? Or not possible.
I am little affrait how will behave 2 diferent capacity batts 5kWh and 6.5kWh when will not be individual monitoring. So SmartShunt to monitor 2 batts seems safety to me.

The physical USB portsto not map to the USB devices inside the system, so there is no real way to force the one to be the the “master” value that you see. The only way at the moment would be to only plug in the one you want to use for the SOC.

I can concur. Been running a Smartshunt now for months, BMS does the BMS thing and protects the bank.

BUT, because of SOC linked to volts on the BMS, the Smarhunt will at times be far out, eventually the twain shall meet.

If the cells stay in balance, the BMV will be closer to the BMS SOC. If cells are out, huge difference between the two. BMW shows like 75% SOC, BMS like 100% SOC.

Also noticed that on certain volts, the flat curve of Lifepo4 cells, the BMS will stay for long on like i.e. 80%, happily absorbing the max charge, cells in balance, whereas the Smartshunt will show like 95% SOC.

Not wanting to derail the thread, newbies just be aware that there are interesting differences, and if you don’t gun for 3.65v, but rather 3.45v per cell, it works fine.

because of SOC linked to volts on the BMS, the Smarhunt will at times be far out

Just to clarify for those that does not want to read all the post around that I would change the statement a small bit:
“because of SOC also linked to cell volts on the BMS, the Smarhunt will at times be far out”.

This is the key to happy life

I do believe this information is on topic, since this driver now covers multiple kinds of hardware.

SoC (state of charge) is always an estimate. The reason why it is an estimate, is because there are always tiny mistakes in measurement. The current sensor you are using may not have the granularity, or the ADC converter that makes that reading digital might not have the range, or whatever technical reason there might be. For this reason, there is something we call “SOC drift”. A meter (like the SmartShunt) will over time see these inaccuracies add up, causing the SOC estimate to be inaccurate.

But there are certain marker conditions that we can use to reset to a known good point. For something like the SmartShunt, that’s when the battery reaches its “full voltage”, and stays there for some period. Then we know the battery is 100% full, and the SmartShunt/BMV will reset to 100%.

Now a BMS has some inside information it can use to IMPROVE the estimate. A BMS has knowledge of individual cell voltages. They are usually programmed with “drift points”, which allows them to drag an estimate up and down if it is obviously wrong. This sort of drift-point correction only really works above 85% and below 30% SOC, and not while under load.

So, depending on how good the current sensor is, and how much they relay on voltage-based drift points, the BMS can be more or less accurate than an external shunt (which relies way more heavily on amp-hour counting). But they will never exactly agree. And these days, I have to tell you… I find the Smartshunt/BMV to be more accurate. There are a spectacularly large number of BMSes out there with absolutely sucky SOC estimates. Even the big brands, with a hall sensor that cannot measure below 0.5A… really really large amounts of drift.

I find the Smartshunt/BMV to be more accurate.

Been saying that for a while now.

Nothing beats seeing the BMV/BMS SOC and cell voltages open in front of you the entire day when at work, over a year or more.

Balanced cells are the KEY.

So what will be safiest way to monitor 2 batts? SmartShunt for 2 batts and BMS to make BMS work and balance?

Hi agan, ihave start configure CerboGX install diver as root and customised my setting. USB to RS485 from daly work on PC but not seen any change when connect to GX. How to check the driver is working

How to check the driver is working

Hi
Have you check the steps available in the troubleshoot guide? 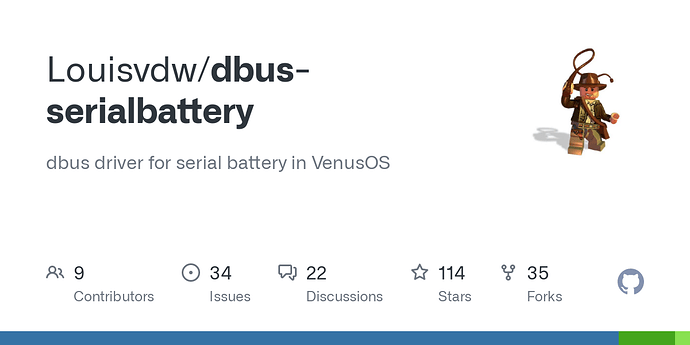 dbus driver for serial battery in VenusOS . Contribute to Louisvdw/dbus-serialbattery development by creating an account on GitHub.

Thanks issue was USB cable. 1.5m fix issue 3m was too long. FYI use original DALY USB RS485 convertor.
i have set these values 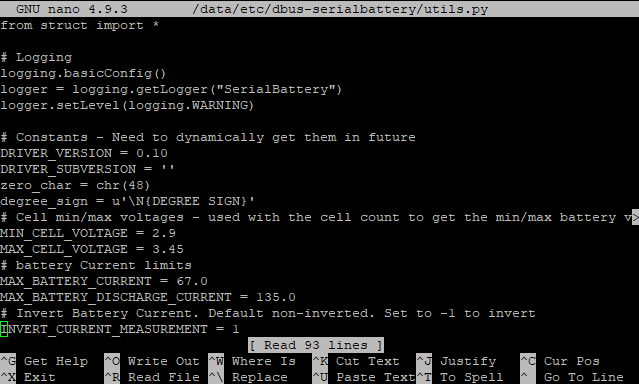 but not show well CCL should be 67 right? 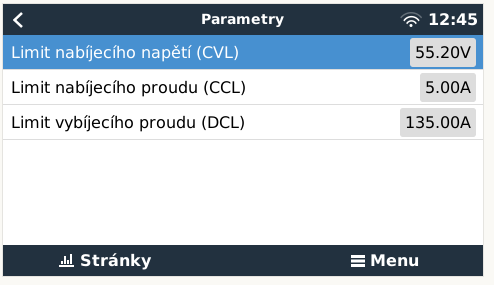 but not show well CCL should be 67 right?

See CCCM
Your battery would be full. Check later when it is not.

I see the actual value by cccm, many thanks

ort for more than one battery bank, you will have to be on VenusOS V2.73 or lower. You can then see both BMS in the details of the Remote Console, but only one will show in the dash and published to VRM.

I discovered that above 2.73 does not work well with a Cerbo GX. I had used one bms and multiple bms. I had a balancing problem so I fixed that, and I updated my Cerbo GX firmware because I thought I was having a communications error with my Multiplus. However, when I got everything update I can no longer plug in multiple BMS’s. I looked at the log file and it there were error messages about the USB. I also got a NO BMS error on my cerbo. I removed two of my three usb connections, leaving one BMS, and reinstalled the driver because I still got a NO BMS error. Reinstalling the driver with only one BMS connected corrected my problem.

On the plus side driver version .11 b4 has me communicating with my smarthsunt again.

11 b4 has me communicating with my smarthsunt again

Thanks for the feedback @Coca7
That beta4 should fix the issues with other devices breaking on the 2.80+ firmware.
You should also be seeing all the BMS like you did in 2.73 (in beta4 with 2.80 or later firmware your GX should be just like 2.73 with an earlier driver.

Other devices seems to be fixed. I will have to do some troubleshooting to see if I can get the multiple BMS’s to appear or not.