What Batteries to buy when starting out with solar and why

I was unable to find a post regarding which batteries one should buy and why.
What to look for and what to stay away from.
1C rating or 0.5C rating.
Lithium
Building your own battery.
Pro’s and con’s of certain batteries.
The other forum was too biased

Just to clarify. Do you want to build your own DIY Lithium battery, or is that a question of DIY vs branded?

If someone wants to start with solar and doesn’t know what to look for.
Some people may say build your own.

Starting - never! The added stress and work isn’t worth it. Go with a small setup with 1 battery and learn before you DIY. my 2c

Build your own is great fun, but it is not for everyone. If you don’t like excitement then rather buy.
If you can’t afford to buy you can look at DIY as well, but you need to get the cells at a good price or you could end up spending just as much as buying a branded battery.
If you shop around you can build your own lithium battery for 50%-60% of buying one.

Are you a person who wants to DIY? You can help yourself, have patience, be prepared to blow things up, and then laugh at yourself after you swore the air blue at yourself.?
Are you game to read up a lot, ask around on forums?
If so, can you start small like mmaritz says?

If all is still pro DIY, then find the right suppliers to avert what Louis is talking about, it must be 10’s of thousands cheaper, the DIY route, with you carrying the “warranty”, before it makes sense to do DIY.

Since I’m on the support end… please please please buy a battery where you can get support. If you cannot do your own support and warranty… then don’t go the DIY route.

Actual conversation with my brother in law in December. He says “oh, I can get this BMS, it’s called a Daly” and I immediately interrupt “I didn’t hear the best things about Daly, perhaps go a bit up?”, and he replies… naaah, I want to do this cheaply.

Don’t be that guy

What to look for and what to stay away from.
1C rating or 0.5C rating.
Lithium
Building your own battery.
Pro’s and con’s of certain batteries.

See Jakes, we all immediately focussed on the one point that dictates answers to the rest of your points.

If you don’t go DIY, then the answers will differ substantially.

I have read that C10 batteries are preferred for solar installations.

So when I have a 200Ah battery, does this mean that to protect the battery I should not discharge it in less than 10 hours?

Trying to wrap my head around the C-ratings. And if at 10 hours, does this mean that it should thus be with a load of 20 amps or less?

I guess it really depends on a lot from your side.

How much of storage do you want? The bigger the storage, the bigger the savings from the diy route. Diy comes with the cost savings but you also need to bear the risks.

What is your technical skill set to be able to design and build the battery as well as fault find issues along the way.

What inverter are you planning to get? Will it be able to talk to the diy bms that you create?

In my opinion, c rating is only important if you are planning on getting a small battery bank with 1 battery on a larger inverter. For example, if you get a 5kw inverter and if you want to be able to use 5kw of power during load shedding, then a single pylontech us3000 or even us5000 isn’t going to do. However, if you keep your loads to within the spec of the battery, then it’s perfectly fine. It’s all about proper planning and knowing the capabilities of your system. I started off with a 5kw sunsynk inverter with 2 pylontech us3000 batteries and never had an issue with overload. Now I have 2 5kw Sunsynk’s with 4 us3000c and still don’t have an issue with tripping. Plan is to add another 2 us5000 when prices settle again.

On the other forum, they will tell you sunsynk and Hubble is the best option. I once asked the question before I was banned there. What good is a 5kw inverter and a 5kw 1C battery when load shedding is 2.5 hours. The 1C battery would be dead in an hour if drained at 5kw. The response I got was that’s not a properly designed system.

So the first step is to analyze your consumption requirements. What’s your backup load requirements and how long do you want the batteries to last during an outage. Once you know that, you can then plan your storage size and battery type.

Next, what’s your sunshine and night time loads. Can they be adjusted to make more loads run during the day like heating water, Running pool pumps, etc. this can then give a rough estimate of the inverter size and solar array size you need to be able to support your loads.

Last and most important is what’s your budget and future plans and brand preferences.

Pylons are a great option. Cost-effective, great track record for reliability and compatible with everything. Just in order to get much power out of them, you need to buy more than one.

I bought the FreedomWon eTower as it seems the best compromise for starting with a single battery. Have not started cycling it though as I still need to get the panels up. (Soon)

I didn’t hear the best things about Daly, perhaps go a bit up

Yea. If I have to rate the BMS that my driver support then you can easily go for most without too much worry, except the Daly. Hope you brother in law goes for one of the other cheap options that are similarly priced. Will save him lots of issues.

I’m really surprised that the current Hubble issues thread had not been deleted. It’s not looking great for those guys.

Was also a bit surprised. Perhaps they realized it’s a pointless exercise. It gets discussed on other forums anyway and deleting threads actually makes it worse for them as people are not happy about it and go complain on other forums like mybb.

So the first step is to analyze your consumption requirements. What’s your backup load requirements and how long do you want the batteries to last during an outage. Once you know that, you can then plan your storage size and battery type.

This is the only way.
When I was planing my install I saw from VRM that 1x 5kWh would be flat by the morning if I ran all my night time loads off the battery and that two batteries would be cutting it fine if I had bad weather the next morning. With the 3x5kWh and enough panels I can easily get by off grid. All my big loads run when there is sun so I don’t usually discharge the batteries that much during the day and usually they are full by 10-11am.

Time will tell if the Lithium SA batteries were a good choice but so far I don’t have any complaints, they connected easily to my system and the discharge and charge parameters are working and as long as it gets to its 56V charge it balances properly and the worst and best cell are 0.03V difference when full across the 3 batteries, all voltages equal when discharging.

Yup. C rating isn’t all that important. To also answer @Swartkat , the C rating if more of a lead acid thing. Lead acid batteries have something called the Peukert effect. The harder you discharge them, the less useful capacity they have. I’m being very deliberate with the terminology here. It is not that the ACTUAL capacity of the battery is reduced, just the useful work that it can do because you make it do the work faster than is optimal.

Lead acid batteries are usually rated at C/20, or even at C/100 at times, because marketing wants a nice big number to slap on it. C/20 is usually too slow for batteries used in solar applications, so batteries designed specifically for this application will often be rated at C/10. When you buy a (lead acid) battery with a C/10 rating on the case, it is also a good sign: It means the manufacturer gave you an honest number for the application it is designed for, instead of just aiming for the highest number he can stick on the box.

C/10 is considered a more practical number for solar applications, because you will usually install a large bank to cater for cloudy days and the like.

LFP batteries don’t really have Peukert effect. Well, if you want to be pedantic they have something similar, but it kicks in so much later that you effectively don’t have to worry about it. As a result, the discharge rate doesn’t significantly impact the useful capacity, but it does impact the life of the battery.

Therefore, if you intend to use the battery in an application where it will be discharged in a really short space of time (eg golf cart, full to empty in about three hours if it’s two good players), then you spec the battery for that. Otherwise it simply doesn’t matter. If you’re not going to use it all in a single hour, why pay for a battery that can do that?

When you buy a (lead acid) battery with a C/10 rating on the case, it is also a good sign: It means the manufacturer gave you an honest number for the application it is designed for, instead of just aiming for the highest number he can stick on the box.

C/10 is considered a more practical number for solar applications, because you will usually install a large bank to cater for cloudy days and the like.

Thank you Plonkster, most helpful information this is.

I have lead acids, and they have the C10 rating on them. Just trying to get the most useful life out of them until lithiums are within my budget.

The manufacturer says not to charge them at more than 50amps, but I feel this goes for discharging as well? I will let loads run up to 30 amps for short times, but no more. Happy if they run between 20-30 amps. 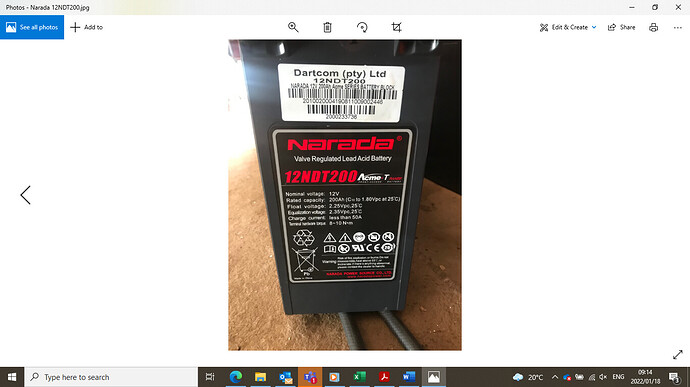 The manufacturer says not to charge them at more than 50amps, but I feel this goes for discharging as well?

Take the capacity of the battery (200Ah in this case) and divide by 5. That is your max charge and discharge rate, as a rule of thumb. I would not do it for long time periods either. For continuous discharge, divide by 10 (which is roughly C/10, a little more due to Peukert).

The rule of thumb for charging is 15% of the capacity. So 30A charge for that Narada, and preferably 20A discharge continuous, but you can go up to 40A for short periods.

I get you, but it would be hard to start up a system for let’s say load shedding with 1 x US3000 where just a kettle takes it out of the recommended range.