If your wife uses the Jojo tanks water to water the garden, then the water bill drops, the sewage bill drops.

Since #DayZero we are using the 5jkl + 2kl Jojo tanks water for the washing machine and garden before we use municipal water.

I also feel frustrated, it “feels like” the PV yield is falling “faster” this year.

Oh for sure, but let’s just say that 10kl will be a “druppel in die emmer” compared to the garden’s watering… we had a few months during summer of 40kl+ per month.

So the 10kl is perfect for our household needs, but will not keep the garden going for very long.

My home is on a septic tank system. It gets full fast if the bath and showers run into it, but those now run into the garden and the plants are much happier.

Did you retrofit a septic tank or bought/built the house like that? I keep on hearing of these tanks that gets full. My grandparents has one on the farm and I’ve never heard of them having to empty it or anything…

If you build your own septic tank of a decent size (2 chambers = 6m^3 total) with a decent french drain, you won’t need a honeysucker in your own lifetime.
Family of 6 = 30 years or so.
Better still build a couple.
I have 4, they will be my grandkids (or their kid’s) problem.

Low yield in winter is not a jhb problem, with the wet summer we had I’m actually getting more consistent and better solar now, but I have noticed it’s not as powerful.

Our previous system had everything flowing to one tank and the drain wasnt done properly, it was constantly being pumped. Our new french drain is big, probably 3m+ deep and 5m long and about 3-4 m wide with a lot of rock and pipe teed off over the rocks, with a cover over everything before putting some soil back over. The two tanks are also buried. There was a lot of sand left over but they just spread it in the veld and it’s already grown over with grass.

I can find pics of it being installed if you interested. 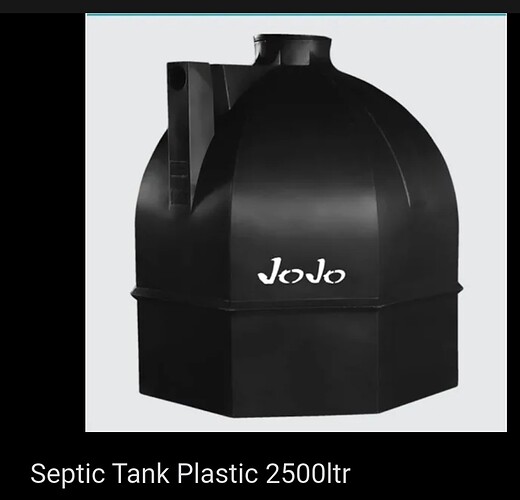 Thanks! Reading this I realise that it might not really be the best thing to try and retrofit. Bypassing my shower, bath etc. will be too difficult and would’ve like the “I solved it for me and my children” option.

We don’t have normal sewage where I live. All the houses have septic tanks and or french drains.

Seems to me the two people having heart attacks because of the sewage charge, both have wives with a very specific idea.

My wife got a specialist in and told him: Listen, we don’t do garden watering … so he put in plants that survived #DayZero. The plants that need water, their is a Jojo tank for that.

Isn’t there a problem with sewerage contaminating ground water??
I have a connection in Constantia who tells me his borehole water is contaminated by the use of french drains.

Yes, it is a serious consideration.

You don’t just install one, you are supposed to check there is no chance of that happening ever.

Yeah so our garden survived day zero, no problem. But now the “want” seems to be to have the garden look good all year round. Nothing will die. It’ll just look a bit dry… I’m not one to dictate wants (due to the obvious hypocrisy it would have), so will probably have to live with the water bill.

borehole water is contaminated by the use of french drains.

There are a few things that can cause this. Firstly where I stay if you are near a stream or other water source you cannot have a French drain for toilets, only for grey water, they have tanks to capture black water and they get pumped, usually then the person has maybe 4 or so 5kl tanks in series.

Re septic tanks. There appears to be two ways that people do this.

The one way is a pumped system where everything goes into the tank, and the municipality comes by with a “honey sucker” and moves it to the waste water plant.

With the second system the septic tank does not need to be pumped. In fact, it cannot be pumped, the excess water always runs away and all you have is a thick paste of waste slowly decomposing away.

After about 30 years or so, the septic tank might be full and it requires cleaning. Which is as dirty a job as you might imagine, although the waste is also highly decomposed already, so it’s not quite as bad as literally shoveling sh*t (though it gets close). Some people simply put in a new tank and reroute the plumbing rather than deal with the task!

And yes, I’ve been alive long enough to experience the cleaning of a septic tank once. What do you do with it? Well, on the farm you dig a big hole and you dump it in. It’s already highly decomposed and there is no harm to anything.

Finally, there is this story of a man who was hired to play the bagpipes at a funeral. He ran a bit late and had some trouble finding the correct location, but he arrived just as the grave diggers were filling in the hole. He realised at this point that this was not a very well-off man, given that the coffin wasn’t particularly fancy. The other funeral goers must have long gone home, as it was only himself and the grave diggers at this point, so he figured he might as well do what he came to do: Play the bag pipes.

The other men said it was absolutely beautiful, even if they don’t understand why you’d play the bagpipes during the installation of a septic tank.

The one thing you never ever ever try to save money or take shortcuts on. Having to dig one up to solve a problem is a very k^k job.

A engineer I know is in the business of designing sewage systems.

I had a discussion with him about this last year, he said the best way by far for residential is to have only your black (toilet) water go in to the septic tank and then your grey water (bath, kitchen etc.) go directly in to the soak pit / French drain. But fat from the kitchen can also mess up the soak pit and shorten its life, so it’s worth while installing a fat trap on the outlet of the kitchen sink which catches most of the fat, you then manually clean out the fat trap from time to time depending on its size.

In terms of contamination, depending on the type of soil, lay of the land and municipal bylaws, in some areas you may not have a septic tank within 50m of a borehole or other waterway, in other areas it’s 100m.

I know in certain areas of the Cape, especially close to the coast septic tanks is no longer allowed at all, it must be a conservancy tank, in other words a sealed system with no outflow in to a soak pit. All water black and grey must go in to the tank which must be pumped out when full.

At my house you also need to use a conservancy tank because of the slope of the area.
So engineering is also an limitation, not just contamination.

Our showers and the washing water is used to irrigate the garden. The rest all go into the tank. Fats from the kitchen can be a real problem and I’m too lazy to clean a trap weekly