Can anyone assist in figuring out what has gone wrong here. I work away from home and I cannot physically check anything.

My wife heard the alarm and upon checking she said she thought she could smell something burning. However she’s not sure. When I look at the alarm logs I see a temperature alarm followed by the overload error 8 seconds later. I’v reset the system, switched the inverter off and on again but the alarm just reappears. I think the inverter might be damaged. Any advice at all will be appreciated. I’ve now bypassed the inverter completely. 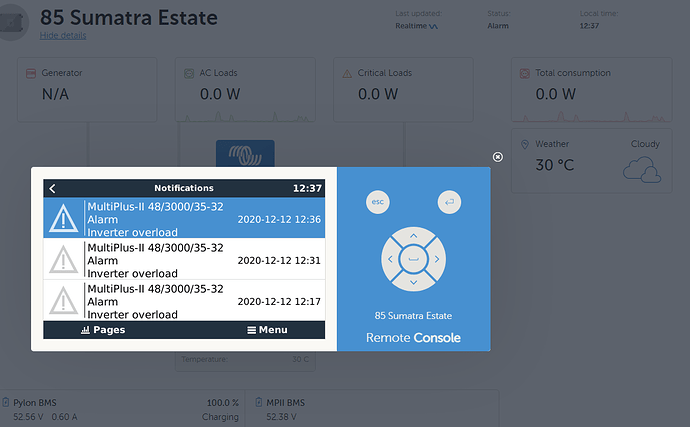 Hi, not an expert, just thinking out loud.

Your inverter ran at its peak continuously for over an hour or even higher, inverter got warm and shut down. But yes, it could’ve been damaged - referring to the burning smell

What critical loads do you normally have have running on your AC out 1 line so we could get an estimation of their combined peak watts drawn?

My oven & hob and geyser are bypassed from what I recall i.e. they do not go through the inverter. There were no large appliances or anything in use that would cause they overload.

Hi! Also not an expert and thinking out loud.

Are you able to pull some data off VRM from before it happened? Like critical and non-critical demand, whether Eskom was down or not, anything you think can be useful?

Where is the inverter installed? In a well ventilated area? Was it a particularly hot day? Even if it got too warm, I would’ve thought that the inverter would just be able to downrate itself, but not sure how this works when Eskom is down also.

Are all the wires nice and tight in their contactors? A loose wire might cause some heat issues (burning smell), I think…

My understanding is that the inverter assumes that it is being overloaded if it experiences a big drop in voltage which sometimes could mean a bad battery rather, but probably not in this case.

I agree with the above. You should be able to get some information from VRM about what was going on just before and possibly even during the alarm.

Just to add I’m guessing it’s not working at all now?
Perhaps also try following the shutdown procedure mentioned in another thread to make sure that it’s fully shut down and not getting any power from somewhere else which can be why it remains in an error state. I also saw another post on a Victron forum where someone mentioned leaving it off for ~12 hours can also help.

To switch back on:

Not sure how to interpret all this info.

Thanks for the input guys.

I’ll be going back home tomorrow so I can try out the suggestions here.

… getting any power from somewhere else …

Reminds me of the day where I did not follow Step 2: Switch of the panels.

Once all is off, before I or anyone starts to work on the system, I switch on the inverter again to drain the last charge from the caps. Had a spark or two in the past see.

Now imagine my surprise when the inverter happily started up … me and the Sparkie where floored. “Ghost in the machine” got a whole new meaning I tell you guys! All we needed was Ghostbuster’s music and I swear we would have made a run for it.

Why? My panels are connected directly onto the inverter’s battery connectors.

Titbit 1: Because of the MPPT connected to the inverter, and the charge in the caps and the caps in the MPPT, my 250/100 can run for a number of minutes after all is switched off unless I drain the charge from the caps by switching the inverter on. More sparks see …

Titbit 2: And because I have voltage sense and the new BMS with no display, I also connected Brad Harrison connectors to those little wires that I can disconnect EVERY bloody THING in one go.For those voltage wires on the batts, man, they can nip you.

I’m not that familiar with all the items and their exact meaning, but isn’t it a bit weird that you have 2.3kW going back into the house (perhaps geyser/oven coming on) for quite a while just before the error (if I’m interpreting this correctly)?

What is the timestamps on these lines and what was your battery SoC and also your battery setup (1xUS3000/2000 or more)? Feeding back that hard could have drained the bank, not sure what the system does if that happens. 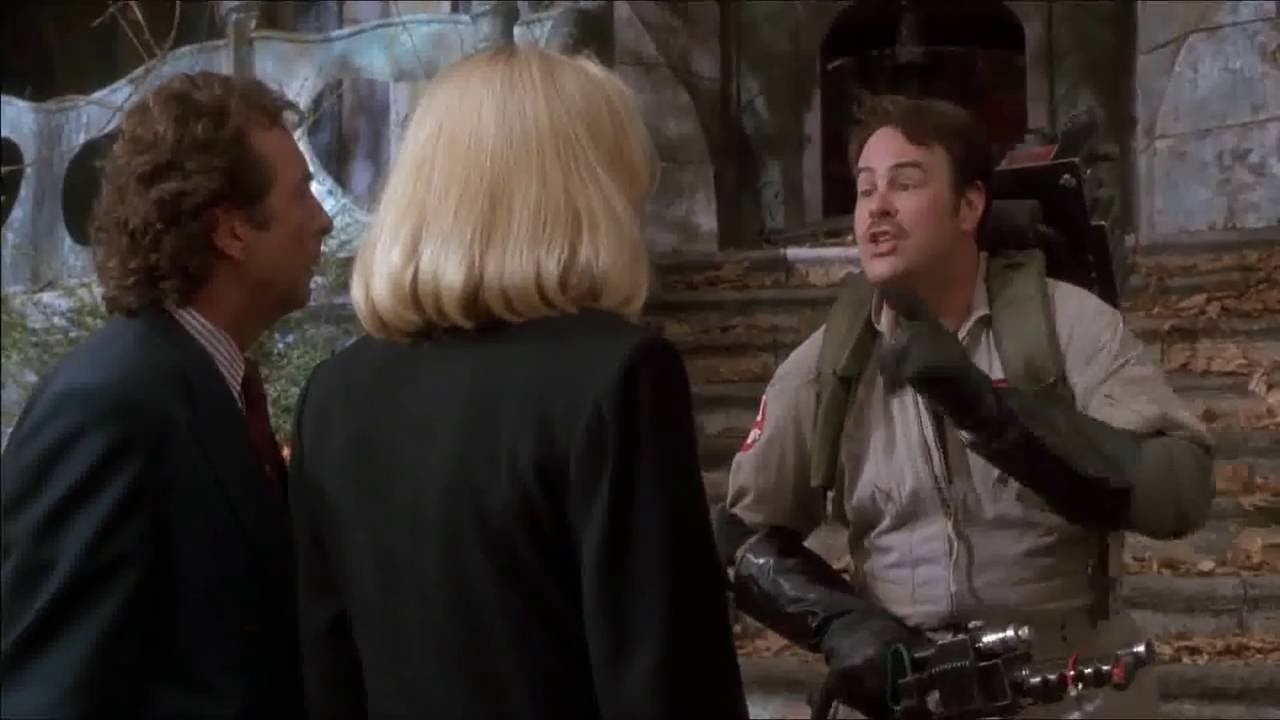 Sorry for the radio silence. We’re gearing up for the festive season so I’ve been extremely busy.

I see what you mean regarding the “2.3kW going back into the house”. I have no idea why there would be that kind of usage.

An update on this.

Jaco came over and found that the unit had blown some MOSFETs. I have taken it to Current Automation , who supplied me with the unit, for repair. It is still under warranty so I don’t expect there to be any problems.

Out of interest, how did Jaco say this could happen?

Did you have surge protection on the AC in side of the inverter?

Out of interest, how did Jaco say this could happen?

Honestly, I dont have an idea, first time I see a Victron like this.

There is surge protection.

The most common cause is what is called shoot-through. And it gets a bit complicated but I’ll try…

FETs are little switches. But they have something called a propagation delay, which is a short time period where they are half-on and half-off. This is where a lot of the heat comes from too… during this time they get a little hotter than usual due to the extra power dissipation.

For this reason, when you have FETs installed in an opposing fashion (so that one side drives the polarity this way and the other side drives it the other way), you must be sure that both sides are not on simultaneously.

Because of the propagation delay, that means you need a bit of dead time in the middle where both sides are off.

If the dead time is a little bit too short, you get into a situation where both sides are inside that partial conduction zone, and you have the full battery current running through both. Over time that can blow up a FET. This condition is then known as shoot-through. It tends to essentially “weld” the FET in the closed position, causing a dead short over the DC bus, and setting the house on fire… or at least blowing a fuse.

The reason could be as simple as a FET that was not quite up to spec, that had a slightly longer propagation delay than it should have had. In other words, it is not necessarily a design flaw, and it is not necessarily anything specific (like a spike, surge, lightening, etc). Sometimes a FET just fails. If it happens too often, the engineers will tweak the design, use a more expensive FET or increase the dead time, etc…

Thank you. The suppliers initially just said it was irreparable and quoted me for a new unit. Their contention was that it was lightning or a surge and the warranty does not cover that. I did not accept their assertion and showed them that I had surge arresters in place. They are now having a second look at the unit. I am quite irritated by their stance and attitude but I’ll wait until they get back. One of the reasons anyone purchases Victron is their 5 year warrant and reputation.

In the interests of keeping all informed, I had the following correspondence from the suppliers.

The H bridge mosfets are blown, the whole row.
The unit was damaged due to a high DC ripple.

Im busy arranging a warranty for this unit

What is the size and length of your DC cables to the unit? The dc ripple will be caused by using too small cables and or installed too far away from the batteries.

The new unit will fail as well unless fixed.

My DC cables are the standard PylonTech 4 AWG battery cables which are 2 metres long.

Thanks for keeping us informed. Let us know how it goes.

It’s unfortunate that you ran into this issue, but it’s good to see the warranty process in action.

There’s obviously the supplier and their processes before the warranty submission and the Victron side of things, so it’s interesting to see how it goes through the motions.