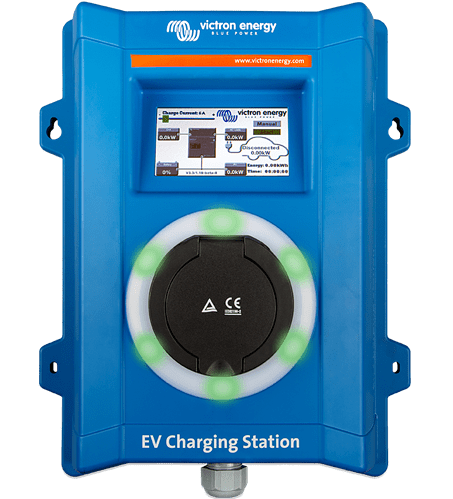 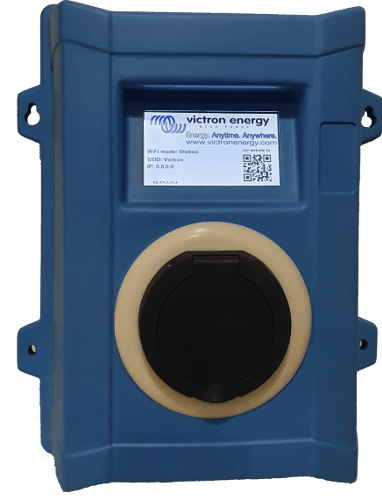 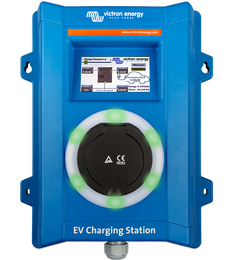 Burying the lede there… IT’S ALIVE!

It uses excess PV to charge the car (gets the value from modbus). It has remote firmware update capabilities via VRM. And I believe it’s been through the whole gamut of tests (cold, hot, wet) to go to market. It’s Lucian’s project (same guy that was in that video where the Tesla is up the mountain without enough range).

@plonkster do you maybe have a date when they planning to sell it on the market. I got someone that’s running a Victron setup that just bought him self a i3 BMW and he will like to get something like this.

It’s on the main website, which means it is for sale. Doubt they’ll have stock in SA, but if you order, they can send it down with the next container.

So… I’d really like to know “available PV” from modbus. Do you know if it is possible to pull it once the battery is full? I can’t think how it would be possible? Would it use a ramp up method to say add 500W every second until it starts to discharge your batteries? (With battery I mean your house’s battery, not the car’s).

This product makes me so excited for EVs! I’d buy one and put in my house just to have it so long!

I’m also quite excited for this…

But I think bi-directional charging would make even more sense in the SA context. That’s where you:

In Europe they’re talking about putting energy back into the grid, but I think the golden opportunities are obviously:

Under TOU, you would use the car to power the house (50-90 kWh batteries) during peak times (CT clamp at main switch needed) and then recharge during the night. Obviously some control would be necessary to make sure you still leave with a suitable charge in the morning, or can override it once in a while.

Imagine if most EVs sold also bring that benefit.

add 500W every second until it starts to discharge your batteries

That is more or less what it does, except it looks at the grid metering point. If it sees power going backwards, it puts more into the car, and so it continues, until nothing is exported or we’re charging the car full speed.

This obviously works better in Europe where people do feed in. I’m not yet sure how it integrates in areas where you are not allowed to.

Imagine if most EVs sold also bring that benefit.

Yup. Every naysayer who thinks EVs cannot work will suddenly want one because he can power his house during load-shedding, and finance the thing through the bank…

The only EV I know of so far which can officially be used to power your home according to the manufacturer is the Ford F150 Lightning, or that’s one of the top features promised anyway.

Ah okay. I use a scrip to set inverter power equal to the power generated by the PV (I’m ignoring DC → AC losses at the moment) and add a number on that (the amount I want to discharge from the batteries at any given point in time). So with a few adjustments to those automations I think I’ll be able to obtain the same result with the car charger even if it isn’t adjusted to integrate with the SA type systems.

Presumably you also don’t want to discharge your house’s batteries to charge your car’s batteries, so you’d have to look at the grid meter plus the discharge from the batteries (or does the system never feed batteries into the grid? Not sure how those systems operate).

Ford makes it a selling point since the equipment is either on-board or in the package. As far as I understand it’s basically an outlet, operating like an off-grid generator when you need it.

The Hyundai Ionic 5 also ships with an adapter that puts a normal outlet on your charging port.

But the big feature is V2G (Vehicle to Grid) or now commonly called V2X which is where it becomes grid-tied with external control about when to give and when to take. Since it’s part of the newer standards, we should see it become more widespread.

Not sure I need my car to have an onboard inverter capable of inverting a sufficient amount of power to run my house. I’d be happy to just connect it to the DC bus and letting the normal inverter take car of it. Though, I would imagine those car batteries to sit ar much higher voltages than 48V, so not necessarily that straightforward.

just connect it to the DC bus

This is the important part about the V2G spec as far as I understand. And yes, the batteries are high-voltage, so your inverter will be closer to the original PowerWall (sans batteries) than a Multiplus.

The inverter in the car is many times more powerful than you would ever attach to a house. Just look at Rimac development to see how ridiculously compact they make them.

Ah, I’ve always just assumed they used DC motors to eliminate conversion losses. If they use AC motors, then I guess the frequency and voltage of those inverters should just be made compatible with local grids. I guess there’s also a question as to how clean those sine waves would be…

Ok, just hang on a bit there. As always, it’s a tad more complex, but also more simple once you have the picture.

You know how an inverter aircon does not run at a constant speed? You know how a car needs to run at different speeds? There is your hint. It is the same tech.

Some electric vehicles do indeed run on DC. Your older milk-delivery vehicles, fork lifts, etc. But electric cars have 3-phase induction motors and an “inverter” that converts the DC. But this inverter is a lot more like the one in your fancy air-conditioner. It is more like a VFD/VSD (variable frequency drive, variable speed drive). And the voltage is not going to be the same as the grid, nor will the frequency. The frequency will be proportional to the vehicle speed.

Now one of the upsides of using this method, or so I am told, is that regen-braking is a lot easier to do. Because you can somewhat easily make the VFD bi-directional.

If the vehicle can also supply the grid, the odds are it will do this via an entirely separate “inverter” stage. You can then also make it an option: People who want it pay for it, you add the module, and Bob’s your uncle.

It also depends on the design of the EV.
Some use a single high voltage motor to drive the wheels, while others us BLDC Hub Motors (BrushLess DC)
The BLDC is an intresting one. It is also used in RC hobby (like RC Planes of RC Cars)
You do have an circuit that controls the motor. It basically switch the power to the different windings inside the motor and the faster it switch the faster the motor goes. 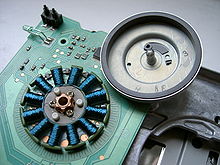 A brushless DC electric motor (BLDC motor or BL motor), also known as an electronically commutated motor (ECM or EC motor) or synchronous DC motor, is a synchronous motor using a direct current (DC) electric power supply. It uses an electronic closed loop controller to switch DC currents to the motor windings producing magnetic fields which effectively rotate in space and which the permanent magnet rotor follows. The controller adjusts the phase and amplitude of the DC current pulses to control...

Yeah I assumed the AC ones would operate via controlling the frequency but what you say makes sense: The car’s inverter which supplies its motors from the battery will not be what you use to power your house.

Also, I’m not convinced I would anyways want to pay for such an option. I don’t want to drive my house’s backup power away and leave my wife and kid/s without backup, or maybe one lousy battery I managed to buy after selling most of my organs for an electric car.

I mean technically it is probably possible to use the same electronics (in part) to power a house, but I’d imagine it would be extremely hard to get that approved for every grid-code. Much easier to have a separate inverter unit, which you can also swap out for 120V/230V markets.