Now we just need to see how fast they legally implement this (within 60 days they say) and if it will change anything for the SSEG market as well. 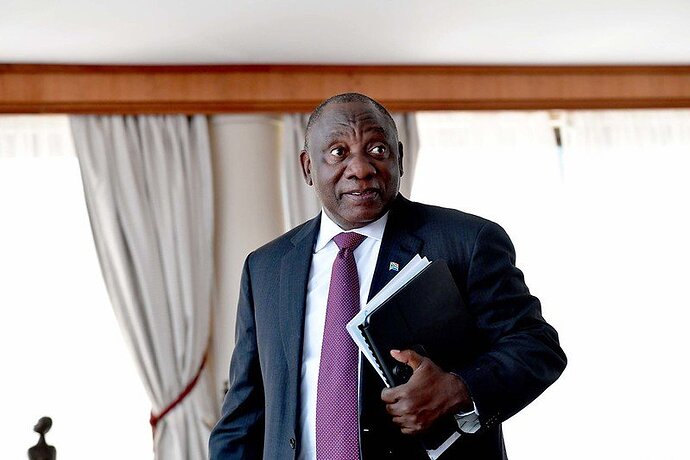 President Cyril Ramaphosa has announced the steps his government will take to ensure the end of load shedding in South Africa.

minister of resources and energy

How this will help SA … if big business can “get off” the grid maybe there will be spare capacity for the home users and small businesses … for I don’t see how this can help SA in any other way.

My reading of it is he’s prepared to have a showdown with the ANC and their socialist ineptitude. It’s a bit like de Ruyter at Eskom: They stand their ground and call a spade a spade and are confident the powers that be aren’t in a position to do anything…

Also stage 4 load shedding is debilitating for everyone in the dead of winter. So when a politician puts up their hand and says this is what I’ll do to fix the mess the electorate responds approvingly. The grid is essential for any modern economy to function.

Man, that guy has cahones the size of houses. He actually fired some people. Then he weathered the completely predictable accusations of racism. He paid off 90Bn in debt, which if you consider that this was out of almost 500Bn, is a really really big chunk. But mostly, the ability to stay the course, to continue with maintenance despite having to do load shedding – other CEOs would have buckled under the political pressure by now and back-burnered the maintenance – that is by far the most positive thing about this CEO.

Of course there are those who know nothing about maintenance and are already calling for his head for his “inability” to prevent load shedding. Those are probably also the people who drive a car until the wheels fall off… then takes it to a Mechanic and tells him they don’t have the money to fix everything… then gets angry at the mechanic because the car keeps breaking…

Of course there are those who know nothing about maintenance and are already calling for his head for his “inability” to prevent load shedding. Those are probably also the people who drive a car until the wheels fall off… then takes it to a Mechanic and tells him they don’t have the money to fix everything… then gets angry at the mechanic because the car keeps breaking…

Now THAT is an excellent analogy. I’m SO going to use it.

You are more than welcome to use it. It is a slightly shorter version of what I’ve used in the past. I’ve actually used the example of CV-joints. Yeah, your Isuzu probably doesn’t have them

In any case, if you know CV joints, usually the first thing that happens is the rubber boot tears. If you replace the boot at that point, it’s often a couple hundred bucks. The car then does another 100 000km without incident, and the CV-joints lasts the life of the car.

But if you don’t replace it, then it throws out all the grease into the wheel well, messes up your favourite pair of jeans (extra cost), and eventually it takes in dirt. If at this point you decide to repair it, it takes a bit more work. Now you have to pop the ball joint, get the shaft out, clean it, pack it with grease, put on a new boot… and again, this is going to be more than a thousand bucks, but it is still peanuts if you do it timeously.

But if you don’t do that… the car will continue driving for several more weeks. Eventually the joints will start click-clacking, but again you can continue driving it. Then one day something will snap off and now it’s all the labour, all new boots, new shaft, etc etc, car out of action for several days, explaining to your boss why you are late every day… etc etc.

Eskom is sort of at stage 2.5 in this process…

Yeah, your Isuzu probably doesn’t have them

The air escaping was because of a dry radiator. A pipe cracked.

The mechanic came, had a look, filled the water, and drove Suzi to his shop. The head was removed, no problem at all!!! … but whilst the head is off, he asked, why not service it sommer? Ag ok …
Injectors, shall we have them reconditioned? Ag ok …
Can we replace all the pipes? We see the intercooler’s pipe is going next. Ag ok …

Few days later he calls back, so, the head is back on, how do you find the gear changing? Ag, just need to do it right. He laughed. You do know the hydraulics on the clutch are all gone? Ooooo … ok. maybe fix that too if you don’t mind, I said.

The next day he phones again … you are aware the shocks are “gone”. What!!! No man, the tyres have NO feathering (I get ±100k per set of tires), NO weaving over the road at speed, solid as a rock around corners at speed AND I take speedbumps at a good clip … to check the shocks. I call BS, I said. So I drove there … blow me down. All 4 shocks were mere weights, NO absorption left in ANY of them. Way to go tyre places, you missed it! Hold on, we ALL missed it.

My point, Suzi can take a “ton” of punishment … but man, if you ignore her “warnings”, dan gaat jy betaal! Problem is, she gave NO “warnings” at all, bar the one-time “hissing” at my wife.

I like old simple tech, same as Eskom. Just look after it. But as with Suzi, methinks that the “old tech” at Eskom, has simply arrived EOL … probably no spares, and all moneis spent are bandaids. Not like Suzi, with spares everywhere.

Titbit: Last night we went to visit new friends … did not even have to ring the doorbell, Suzi told them we have arrived.

As long as you still have some water, you are often okay. It is when there is no water left that things break.

Also depends somewhat on engine construction. Cast iron block with iron head… no problem. They expand at the same rate. Iron block with aluminium head… less forgiving, they expand at different rates. Lose proper cooling, and you will do a head gasket…

Bloody hell plonkster, did you look at my car in secret this week? This is literally what I went through this week!

Amazing part is that one of the tyre places looked at it (I actually only took it to rotate tyres) and suggested I replace both front CV joints, inner AND outer, because of torn boot…

EDIT: oh, and the shocks. But I could see they were leaking fluid, and since the car is 13 years old with 144k on the clock I guess it is time.

did you look at my car in secret this week?

Haha ok that is funny. I tend to have an ear for things, not sure why. I’ve told many people: hey that thing sounds a bit unhealthy, to have them say a few days later: I had to replace a coilpack, how did you know!?

The worst things are those where you hear or feel something, but you are not sure what… is it a wheel that’s a little off-round or a wheel bearing? Took me weeks before I finally had a chance to lift both rear wheels and feel the difference between the two… it was a wheel bearing.

But with CV joints… when you see that tell-tale grease stripe in the wheel well… you know.

I’ll be honest – fairly useless when it comes to cars. I might have fallen for the lady at the tyre place telling me both inner&outer CV joints on both sides needed to be replaced – if it wasn’t such a bloody expensive quote!

Made me say “thanks I’ll let you know” and drove out and started looking for second opinion first. And second guy I spoke to asked “click-clacking?” and I said “no” and he said “sounds like the boot – we’ll check that first” and “if it is already worse than that then we’ll re-grease” and “if it is worse than that then we’ll take everything apart and look at the damage and see if we clean up everything” etc.

Hoping I caught it early enough.

(Boy this has gone off-topic)

(Boy this has gone off-topic)

Who’s the moderator? Order must be restored!

I can only update the subject

Someone else will have to split the thread if you want to go that far.

I don’t think we need to play thread-police here. Not when one of the moderators himself does most of the derailing

Perhaps we overdid the car analogy a bit, but I do think Eskom is a bit like that. It’s perhaps more like a rental company with a fleet of cars, all breaking down in various ways after being driven with worn parts for too long. We finally have a CEO who does as much maintenance as the workshop can handle despite having to turn away customers at times because he’s out of available rental cars…

And ironically, that means the perceived shortage is actually evidence that they guy is doing his job, rather than the reverse, as some would construe it.

As for the NERSA changes… places like Cape Town and Stellenbosch will hopefully cash in on it.

places like Cape Town and Stellenbosch will hopefully cash in on it.

There are 6 municipalities that was on the list to build their own PV plants. These 2 and also Mosselbaai was on the list. Can’t remember the other 3.

What is happening with the contracts awarded to solar farms on auction based on price/Kw?
They were mostly built in the northern Cape…