Thought I would share our solar setup. Purchased a fixer-upper at the beginning of the year and having a small solar install to start off was always part of the plans. Plan to stay here at least a decade or two

and trying to be as green as possible is the plan.

Did plenty of research first and became a bit despondent at the pricing around the solar installation. Had 3 installers come out and assess the job and give a quote. I then joined the “other forum”, of which I would not mention the name

haha, to find other real people that had the same requirements as me. To gauge what’s needed.

Anyways, fast forward to a couple of forums posts and calls later with Jaco, not forgetting a global pandemic, we finally decided on a system within my budget. How I ended up with Jaco is that there’s a clear difference in pricing based on location. That’s a topic for another thread though.

Kudos to Jaco and his team. These guys work ethic are impeccable. We have been dealing with many tradesman since moving in and have had countless issues. If only Jaco did construction work as well haha

Added a couple of pictures and details below.

I’m not sure of my setup direction, but it is 4 on one side and 4 on the other(newbie here): 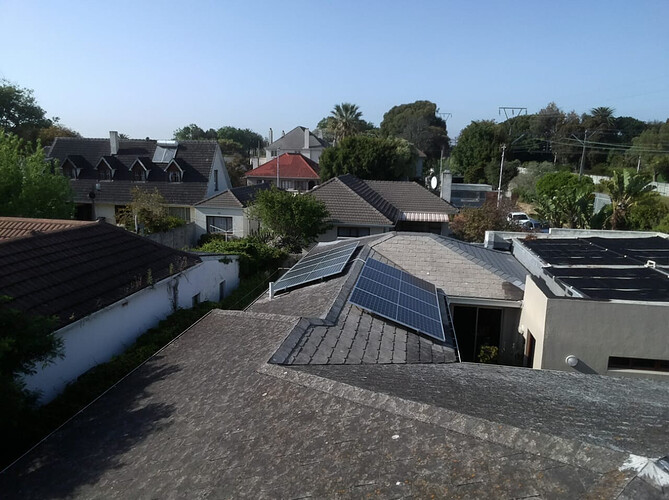 Very neat install. Will look at getting a cupboard in the future: 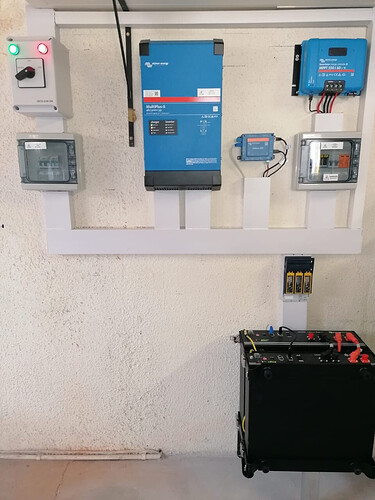 The Boys! Jaco said he does not do photos: 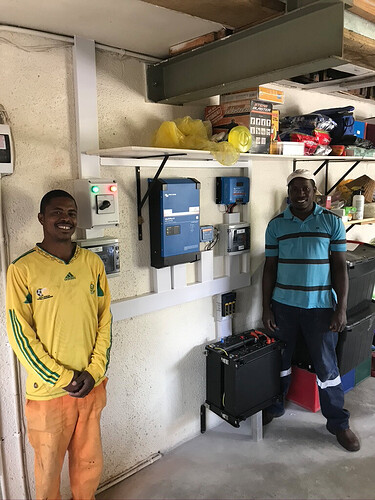 The microwave or airfryer, chomp chomp: 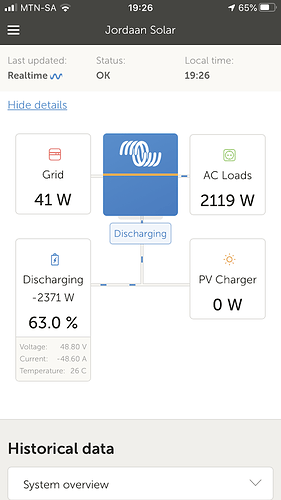 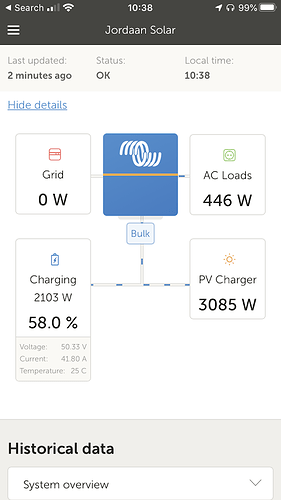 Our Solar experience so far: 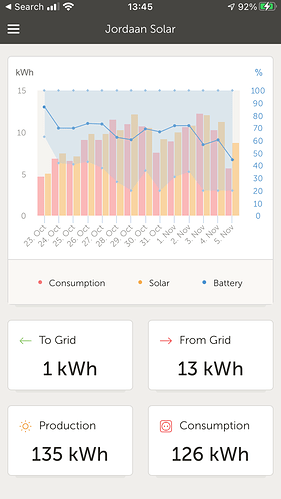 Yes, Jaco clearly is a cut above the rest, which is why I kept returning to him for additional batteries, two solar geysers and now waiting on an aircon install.

I really like the way you had the Pylontech’s mounted. Apart from saving space, any other reason why on their side like that?

My garage angles downwards towards that wall… And I have already had my fair share of water issues in there. I think having it off the floor is great idea! :-D. (Obviously not the technical answer.)

I really like the way you had the Pylontech’s mounted. Apart from saving space, any other reason why on their side like that?

I made that decision purely for space and to get them off the ground for water issues.

Ah, makes sense, plus it is then easier to check the battery LED status.

Jarrett, where are you based? Our setups are very much alike save for the fact that I have only 6 x 410’s yet, and operate with a 200Ah lead acid bank.

I hope to have 6 more panels by March/April next year.

Would like to compare data/figures in the future. It felt like looking at my own data with your first pic, our microwave or air fryer does the same.

your system looks great, guess Jaco’s boys are smiling as it was an easy job for them to install your panels compared to my double storey “slippery” tile roof with the winds at 30 plus kph

One question, the panels are in 2 directions, but I see only 1 MPPT? What was the consideration for only the one?

The angles doesn’t look that bad, but still you will have MPPT mismatch and could lose significant morning and evening energy.

Or did you do an energy yield assessment and found the cost of MPPT outweighs the loss factor on the mismatch?

Hey @Swartkat. Thanks. We are based in Kenilworth. Lovely rainy day!

At the moment I am manually recording the daily prepaid meter values. I’ll share the sheet later. We only have the oven off the solar setup. Would be good to compare data for sure

As for the Victron info, will see how to share that. Have not had the time for custom IoT stuff. But looking at putting that data somewhere to analyse. Saw this project https://github.com/victronenergy/venus-docker-grafana.

That’s a higher grade question I can’t answer @Rautenk. But on the hardware I can say my budget was very restricted. And passing this project past the government(wife) went through lots of red tape haha

But simulating load shedding and seeing about 1-2 units being used a day is kind of cool. Does need some change in the way we live daily to achieve max ROI, but we will get there. Government is very impressed.

For interest sake (and if I can get my PVSyst to work), I will run a quick modelling exercise to see what the effect is. Haven’t done it specifically for Victron, battery coupled… Will post on this forum to show if there is a difference.

hi @jarrettj, I have a NE and NW roof, Jaco installed 6 panels on the NE roof and 6 panels on the NW roof ( 355 watts each ), the system hits 3600 plus watts max for the day, and stays in the 3000 watts plus range for a good part of the day this is with ONE 250/70 mppt
If you go to the NW & NW facing panels article from about ten days ago, there is an article in my post that talks about the loss being less than ONE percent

One question, the panels are in 2 directions, but I see only 1 MPPT? What was the consideration for only the one?

But on the hardware I can say my budget was very restricted.

Hi @Rautenk, all of these factors as well as some other forums post as well as discussions with Victron made me decide that with the available budget , this would be the best way to go.

What we saw on other sites is that having an East & West array on the same MPPT is working pretty well, just refrain from having Panels from the same string in different directions, that messes up the strings production completely.

the panels are in 2 directions, but I see only 1 MPPT? What was the consideration for only the one?

It does not have a big negative impact to have them on one MPPT. See this thread for more information.
Solar panel direction East/West vs North

Will look up that article, thanks. Added details on MPPT to original post. Will have to get back to you on my averages etc. Probably around 2500, but I am guessing here haha.

… refrain from having Panels from the same string in different directions …

And there it is … this is the teeny weeny tiny little titbit that must be carefully considered when connecting different facing arrays on the same MPPT.

Which is also difficult to do if you have one of those very high voltage MPPTs, like the Goodwe’s would have.

Indeed, if you go East/West, or even NE/NW, you need both sides to run at the same voltage (ie same panels, same series/parallel config), ie they have to mirror one another.

What happens is that the lower side cannot make power at the voltage that favours the stronger string (the one the MPPT found by trial and error),so you certainly don’t want to introduce a difference in voltage by using dissimilar arrays.

Also, putting part of your panels in a series string into a different direction is just idiocy. The current will drop down to what the panel with the least light makes… it will kill the entire thing

Hey. How is your system performing so far with the different facing arrays on the one mppt?