Help me choose: Sunsynk vs Growatt

Aaaanyway. So now we need to consider how big that bonding relay needs to be. It can switch 25A, but it can carry way more. I suspect the contactor will never actually have to switch the full fault current. The trouble is, I cannot guarantee that. In a fault condition, everything is off the table unless it can be guaranteed. Then I have to make provision for the maximum current that could occur in a fault situation.

So… that 25A contactor is probably okay. But I cannot guarantee it. And it might not actually sign off…

To continue that thinking. The bonding contactor is never closed while the grid is connected. It is always closed after the grid is disconnected, and it is always opened before the grid is reconnected. Therefore the maximum fault current it needs to switch, is the short circuit current of the inverter (which is roughly 200% of it’s max capacity). But that is still over 60A on an 8kVA inverter. So still no dice.

On a smaller inverter, if we could guarantee that the bonding relay will never be operated with the grid connected (which you can do, if it is integrated as in the Multi), then you could go smaller. In this case, I think it is clear that you need something bigger.

The EN bonding relay would be in this segment, so should be rated to the same current as the breaker on the output of the inverter.

I suspect the contactor will never actually have to switch the full fault current.

And I guess that’s what all the suspect installers and diy guys assume as well. It works fine in 100s of installs… so it must be fine… or 10A has been fine for me so why do I need bigger…. Until something goes wrong.

I fail to understand why these shortcuts are taken. Percentage wise, how much more does the correct safety devices add to a 100k or 150k install. Almost negligible.

I guess the cost element is a part of it, I also guess for many installers they simply don’t know better. Even on this thread, it took quite a few posts for some pretty knowledgable guys to come to what seems to be an authoritative conclusion.

Am I right in saying there is agreement that the contactor/relay should be rated for at least the same as the breaker on the inverter output, and the cables sized accordingly?

for at least the same as the breaker on the inverter output, and the cables sized accordingly?

Yes, that seems like a good conclusion. If you wanted to be pedantic, you could say it needs to match whichever is the larger breaker (input or output), but that would be just to cover the fault condition where the contactor is closed while the grid is connected AND there is a fault condition.

Input breaker is 50A, so that’s not a problem in my case.

Would it solve the "problem“ if I put a 20A breaker on the N wire that goes to the contactor?

Would it solve the "problem“ if I put a 20A breaker on the N wire that goes to the contactor?

That would do the opposite of solving it.

Ok. Scrap that idea. It would keep the contactor from exploding but also kill the earth in the process

Yes. We never put a breaker on the earth / protection.

Communica sells a 40A relay that’s relatively cheap ~ R350 the last time I got one, can also be din rail mounted. That’s just a little over the rated current on the 8kw unit.

The 40A from AC/DC for R80 seems a bit suspect though.

During this entire conversation I was working under impression that a 63A contactor is not cheap. Which it isn’t, if it is a multi-pole thing like you’d use in a star/delta starter, but after actually looking, the Hager is about 1k (that’s for a 2P), ACDC has one for under R500 (also a 2P). Haven’t seen any 1P models, which is a little unfortunate… takes up more space in a DB.

You may think that you can just parallel the contacts of a smaller contactor to get the rating up, but because the contacts never engage or disengage exactly at the same time, that doesn’t work.

Found this guy lying around at the old man’s, but probably not much better than the contactor I bought yesterday?

What’s the current wisdom on the grounding of batteries? Is this something that needs to be done?

…earth wire same size as the supply wires (therefore also the contactor) up to 16mm^2.

The requirements for the cross sectional area of the earth conductor itself is significantly less: 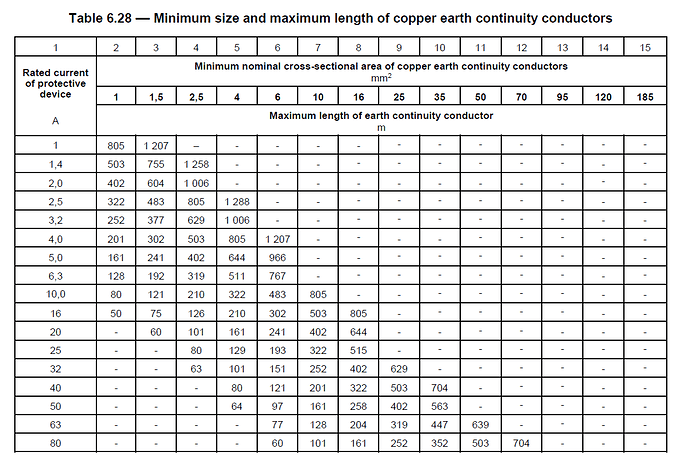 Went live a bit earlier this evening. So far so good, nothing has burnt down or exploded yet.