Because I have it, and trust the 2nd Life 100ah cells, with the new 280ah Grade A Batched Matched cells, for fun, I’m trying what @Phil.g00 mentioned before …

After top balancing all together as one bank, before I reset the SOC: An in-production after 2 days: AND I wanted to “test” how one can “make do” if you ran into severe problems.

Thinking is that the 100ah being the bank AH setting, the 280ah cells will idle in this instance.

EDIT: Or have a spare lead acid bank standing around …

Won’t the 280Ah batteries drop voltage much slower (causing the bank to go out of balance all the time)? Which might be fine? What would happen say if cell 1 is at 3.6V and cell 2 at 3.5V? Wouldn’t current move from cell 1 to cell 2 or are there diodes stopping this type of thing?

(I’m not shy to show my ignorance, that is how I learn!)

I’m no expert either, I learn by the seat of my pants …

Theoretically, all the cells should discharge at the same rate, T&C’s like resistance per cell being similar and all that.

When discharging the 100ah cells drop faster, obviously, the Delta increasing quite a bit, expected, the 280ah taking “their time”.

When recharging, the Delta starts “wide”, yet “shrinks” as the 100ah cells are charged.

Why the 280ah cells are not “running” away, my “theory” is that the 100ah being more discharged, absorbs the charge faster than the 280ah, still being relatively charged.

At the top, THERE they must all “settle” with a Delta below 0.008v or some such.

This teeny bit of current being too small to register anywhere, helps to balance at the top, therefore the cells balancing themselves at a leisurely pace whilst the house is being powered with all the panels can provide.

Ps. As I was typing, the volts hit 58.68v … balancing stopped, now I watch if it goes above 58.75v … or I will have to intervene, like recently I figured, if I want the system to discharge NOW … switch on both ovens!

Like now, to force a fast hard discharge, the ovens my only recourse … 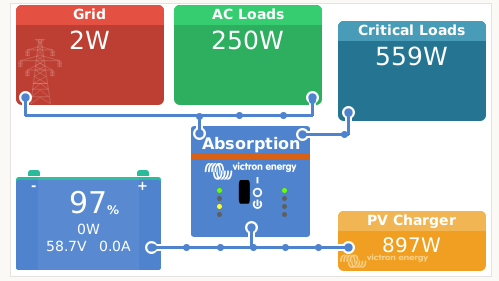 But so far all is holding nicely … 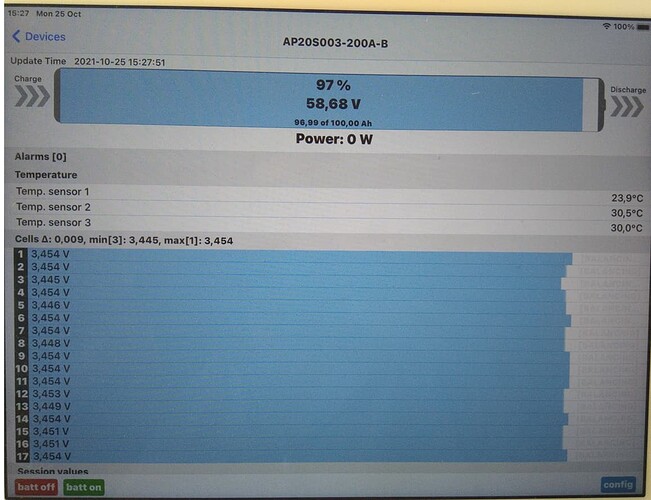 Ah wait, obviously what I’m missing is that the cells themselves are not connected to each other other than through the balancer, so the high voltage cells will not be charging the low voltage cells?

Evidently it shows that I’ve never built a battery. 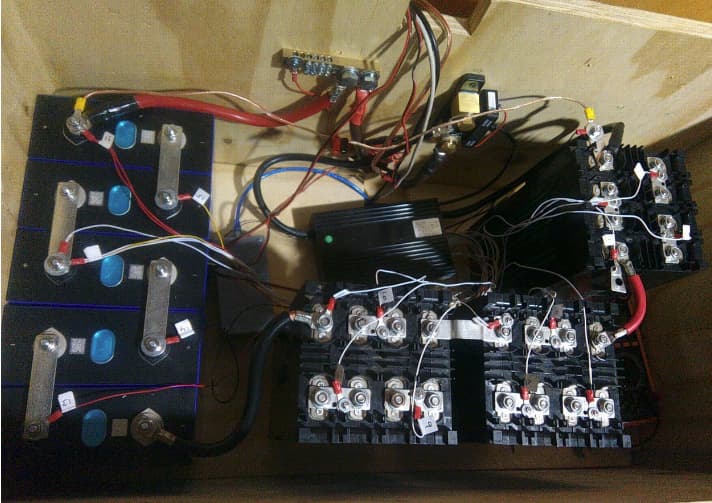 The 2nd Life 100ah comes in those neat little brackets, in 12v or 24v configuration. I’m told they came out of a vehicle battery.

Yes but only in one direction. The positive goes out the one end into your system and the negative out the other. So one cell cannot charge another?

From what others have said, no, unless there is current flowing.

So far that seems to be the case.

Ai, what an absolute pleasure … Frankenstein bank top balancing itself. 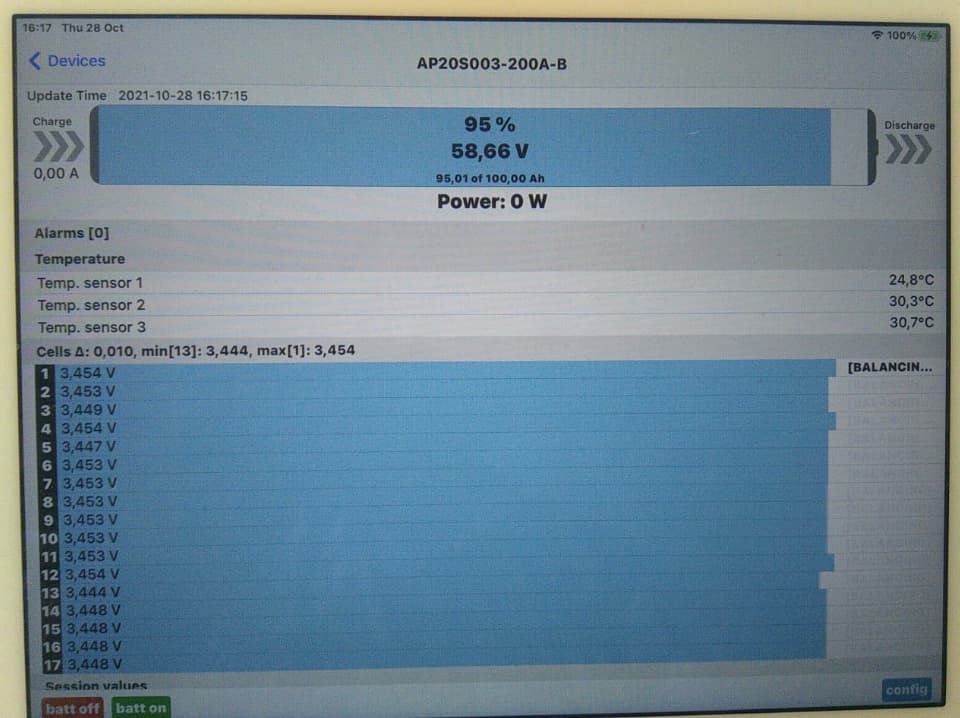 THE best part is, it was sitting there for more than 2 hours during LS event.

Must also give kudos to @Louisvdw driver here, as I can “adjust” it for “extra protection”.

The reason your 280Ah cells don’t run away is because they still give and take the same amount of energy as the 100Ah cells (since they are all in series). If you start off fully charged at 3.45VPC and then discharge the battery, even if you use the full capacity of the 100Ah cells they will be empty but the 280Ah cells will still have 180Ah available (i.e. They still have 64% of their capacity available). Now you start charging the battery. Once you have put 100Ah back into the battery all the cells will be fully charged, since they all only needed 100Ah to get full from where they were. The fact that the 100Ah cells were completely discharged and the 280Ah cells were still at 64% doesn’t matter.

Indeed, I think of it like a water tank analogy. If you have a 280-liter tank and a 100-liter tank, and you drain them simultaneously at the same rate (which is what happens with cells in series), then the “battery” is empty when the 100 liter tank is empty, but you still have 180 liters in the second tank. If you now put 200 liters (100 each) back into the tanks, both are full again. The tanks are “top balanced”.

You can also bottom-balance them, where you put 100 liters on both tanks. Now they are empty at the same time, but if the battery is “full” then there is still 180 liters of dead space in the larger tank.

And then finally, you can go with a kind of middle balance. The larger tank has 120 to 150 liter in, the smaller one has 100 liters… the battery is empty whenever any tank runs dry, and you simply “balance” so that the margins are kinda sorta okay…

Yes, that was my “theory”, the “resistance” higher in the 280ah cells.

But with my plight to date, it can ONLY work if the cells, internally, are more or less on par like these A Grade batch matched and the “quality” 2nd Life 100ah cells.

just because the stuff was here.

I know the feeling!
What I have found challenging is to get detailed info on the BMS (a schematic would be a good start!)
Exactly how does it balance the individual cells…
And how does one check this other than inserting an ampmeter in each BMS - cell wire??

A visual inspection of the board will often give it away. If you see a row of FETs with little surface mount resistors next to them… almost certainly a passive balancer. If you don’t see the resistor ladder, but you see a couple of inductive components hinting towards a switch mode power supply, it may be an active balancer… ALTHOUGH… there will almost certainly be at least one buck converter in there already to power the control board (typically at 3.3V and/or 5V) from the overall battery, so don’t mistake one for the other

If it comes from China, the active types usually don’t have inductors, they are switched capacitor topology. What you describe is superior in many ways, but a lot more expensive to implement. Look at the LTC3300 datasheet (and then check the prices on digikey/mouser).

I’m looking for a 4S 8A 16.8V BMS Li-ion Battery protection & balancing PCB.
This is to replace a Protection Board that the 2x4 18650 in line that the battery pack has.
I have figured that without balancing it will limit the use of the battery pack since once out of balance it will always have reduced capacity…
Where can I get these?? 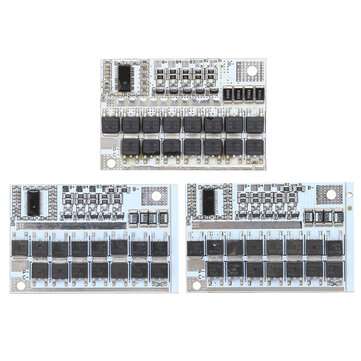 Maybe have a look around for something that has a rating of <100A. There are tons of them…

Yes but the terminals need to be well positioned…
The cells are in line and the wiring to each pair is already in place.
So first prize is to get one with a similar layout otherwise the wiring is a nightmare (and I have lots of these to do…) 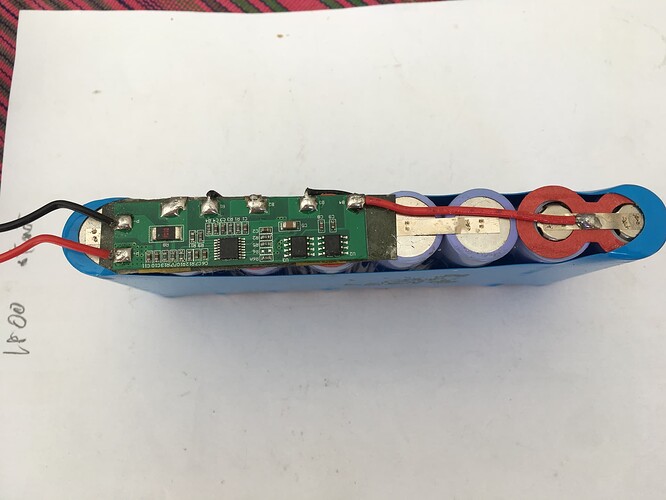 This model would have worked perfectly for you if you were looking for a 3S.
I ordered one but have not yet found the time to do the planned project yet.