I hung onto Win7 until my old laptop had an unfortunate fall to the hard floor (wasn’t me!)
Anyway my ‘new’ laptop has Win10 (and is already trying to get me to upgrade to Win11)
What I find barely tolerable is the default MS browser that cannot be uninstalled. This assaults you every time you open your machine with some manipulative image.
I thought that MS was less aggressive and more respectable these days.
Is there any fix for this??

You simply install any other browser of your choice like Chrome and set that as your default browser. I don’t even notice Edge on my machine anymore even though it’s still there, I use Chrome as my default.

Edge isn’t so bad as in the old days though, I actually don’t mind using it if I have to, I just prefer Chrome.

Edge isn’t so bad as in the old days though, I actually don’t mind using it if I have to, I just prefer Chrome.

WhatsApp on Ege has issues with vids, WA on FF has issues at times forwarding vids. Chrome uses the most memory it seems …

I am with you on windows 7, guess it was one of my favorites ever. Had to upgrade to 10 when support on 7 stopped. Never a big fan of 10 and then a week ago my laptop told me his ready for 11, upgraded and was pleasantly surprised by the changes and feel of 11…

In the bad old days before the PC we had dedicated programmers that allowed you to access/change the programs for industrial controllers (PLCs)
Then we had dedicated I/O cards that slotted into desktop PCs. But compatibility was always an issue. The control industry is conservative and slow so to avoid this pain control guys used to deliberately stay on the oldest supported OS.
Old habits die hard!

I have actually mainly been using Edge the last year or so on both my phone and desktop after more than a decade on Chrome. Just wanted to give something new a try and it works very well for me.

On my desktop I don’t use Chrome at all anymore. Still use Safari a little on my cellphone. On my work laptop I still use Chrome.

Microsoft seems to really have put some good developers on Edge so it can’t hurt giving it a shot.

Edge is now also Chromium based, so it is the same rendering engine as Chrome.
But yes you cannot remove it and they have those alerts what you want to open Chrome that Edge is now just as good. Just ignore it and it will be fine.

Win 10 is just is stable as Win7 was these days. I’m not convinced of Win11 yet.

On my Macbook I use Safari, same on my iPhone, on Windows I prefer Chrome, but as said I don’t really mind Edge, it’s far from what IE was in the old days.

I still use Windows 10 on my main desktop machine, I have tried Windows 11 and it was fine, but I haven’t made the switch on my main machine yet, I’ll probably hold on to 10 for a few more months, but won’t have any problem to switch to 11.

Yes Windows 7 was great, but I had no second thoughts in upgrading, I in fact even used Windows Vista for a year or so and didn’t find it all that terrible as everyone said in those days. One Windows version which I never used, which I totally skipped was Windows 8, I switched from 7 to Vista and then to 10.

All I want is a stable, solid system, I like trying new things. I’m not one of those people who will jump on a beta though, but I’m also definately not one of those people who will hang on to a OS for years. The other day I helped a guy with something on his PC, he was still on XP. Now XP was amazing back in the day, but try running it today after being used to the latest Mac OS and Windows on core i7 machines, all you can do is shake your head, and you have plenty time to twiddle your thumbs.

@TheTerribleTriplet I don’t find Chrome such a big memory hog like it used to be a year or 2 back, I remember it being quite a big issue, but for quite a while now, it’s not really noticeable to me.
I use tabs quite extensively, I always have a minimum of 5 to 10 tabs open at any time and jump between them constantly, but I guess the core i7 with 16 GB helps with that.

Edge is now also Chromium based, so it is the same rendering engine as Chrome.

Please elaborate on this. These are 2 giant IT companies normally at each others throats…

From Wikipedia Microsoft Edge - Wikipedia (I could not explain it better

Edge was initially built with Microsoft’s own proprietary browser engine EdgeHTML and their Chakra JavaScript engine, a version now referred to as Microsoft Edge Legacy.[16] In December 2018, Microsoft announced plans to rebuild the browser as Chromium-based[17][18] with Blink and V8 engines. During development (codenamed Anaheim), Microsoft made preview builds of Edge available on Windows 7, 8/8.1, 10, and macOS.[19]

Microsoft announced the public release of the new Edge on January 15, 2020

One Windows version which I never used, which I totally skipped was Windows 8

The user interface for Win8 was similar to a mobile OS with touch tiles on the screen. My understanding of this was MS was trying to establish a common OS for PCs and mobile phones. This was a failure since the PC user wasn’t going to happily lean forward and prod the screen with greasy fingers.
No, I think these are separate devices each catering for their own particular market. I also think tablets have run their course since you don’t see them much any more.

The tablet market is very much alive and well, Microsoft Surface laptops is actually pretty good, including using Win 10 with a touch screen.

Then of course there is the iPad side of things as well, which is a beast on its own.

Personally I don’t have use for a tablet, but I know many people who use them, some who even use tablets for 80% of their computing needs. trying to establish a common OS for PCs and mobile phones

That’s something that’s been tried repeatedly, and failed every time. Ubuntu tried it too.

I’m really pleased that the PC has survived. Even if it were simply to teach you to type!
But seriously, you can’t have the trendy geeks saying that PCs are history

If I assume you mean specifically the PC as envisioned by IBM, I’d like to point out that Apple hardware have been using Intel chips for a couple of years now. I think the divide has been blurred so much that you cannot really look down on the “lowly PC” anymore. And of course Linux completely changed everything, especially when that became the base for Android, so that more than half the smart-phone wielding population are now sporting a cheap computer running some form of Unix…

How the world has changed

@TheTerribleTriplet I don’t find Chrome such a big memory hog like it used to be a year or 2 back, I remember it being quite a big issue, but for quite a while now, it’s not really noticeable to me.
I use tabs quite extensively, I always have a minimum of 5 to 10 tabs open at any time and jump between them constantly, but I guess the core i7 with 16 GB helps with that.

I’m on a Xeon server as my Desktop, 24Gigs of memory, these browsers use memory.

FF has WhatsApp open, so it uses more.
Chrome is Gmail and other general sites.
EDGE was similar usage, smallest now, as it works “differently” than the other two, so I use it for less.

And I cannot go Win11, don’t have the TPM chip, and it costs too much on this old Intel Xeon server to get one.

I hope Win11 removes that requirement in due course.

Most motherboards do have a TPM chip, but the 1.2 version. However you can also upgrade most of those with new firmware to the TPM 2.0 version. I upgrade the TPM of my old 6th gen i7 to the V2.0 this way. You can check under Security processor details what version you are running and then search online for firmware upgrades for it. For dell you can find it here 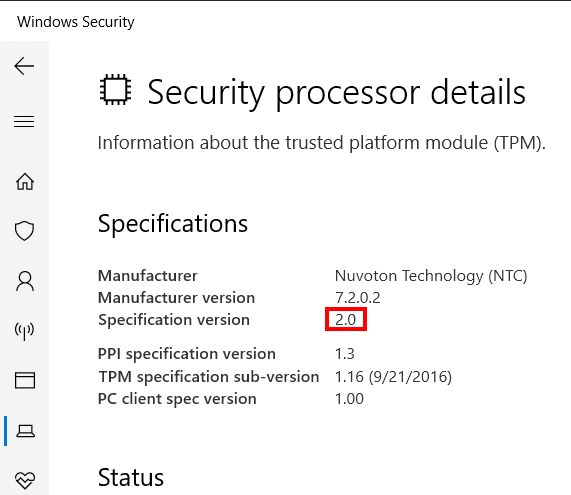 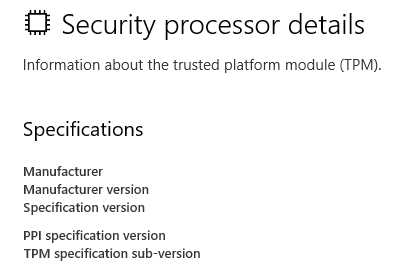 Bought it new for like R1500, EOL product at the time … actually have 3 of them in the house. Low on power usage, fearsome cooling capabilities, and they work.

Think my connections need to find me a 2nd Lenovo server somewhere.