Why use DC rated protection devices!?

The most common installation related question I normally get form a owner/installer is why they should spend the extra money on DC rated Fuses, Isolators and breakers, why cant Ac rated equipment be used.

The following video was recorded on site this week and will be used to explain the dangers of not using DC rated equipment.

Now for a quick explanation of the design differences between ac and dc breakers and fuses:

So what is the difference between an AC and DC arc.

Because ac goes through a zero point every time the sine wave changes from + to -, the arc gets extinguish almost immediately as no current can flow at 0V

What then is needed to extinguish a DC arc?

In short you need to open the contacts wide enough, fast enough while breaking down or eliminating the arc as efficiently as possible.

What danger then lies in using AC rated equipment for DC circuits:

The ac breakers does not do any of the three things mentioned above, so in most cases the arc will continue, till the contacts burn away enough to create a big enough gap to stop the arc. But in the meantime the area around the arc will heat up to temperatures way above 1000 degree c and we all know, that is more than enough heat to set almost everything on fire.

The conclusion is simple, if you dont want to burn your place down, rather pay the extra money and buy the correct equipment from the word go. You might get away with using AC rated fuses and breakers for years, and then one day something goes wrong and the fuse that was supposed to protect you, causes your home to burn down.

@JacoDeJongh, thank you for the great description!
I have also received numerous questions on why this is done and even seen AC units used on DC circuits.

What is interesting, when I did some research, is that some “newer” AC model circuit breakers look pretty much the same inside as the DC circuit breakers. They have arc dividers, but what they do lack is additional functions. These would work (perhaps once or twice) in the case of overcurrent, but will eventually fail.

What is even more “frustrating” is the AC components that have “DC” rating but then internals isn’t DC at all. This is also risky and I do advise if you are uncertain install something that is dedicated AC or dedicated DC do not mix dot not wonder, do it right!

What you can also perhaps put in writing and as elegant as above, the differences between fuses and breakers (DC side) and how to size them… that is also one of the things that I have found where an 8Amp circuit is “protected” by a 40A breaker…

If one wants to get really technical… every switch has a DC rating. But you won’t know until it is actually tested by someone.

At 12V, just about any 250VAC rated switch is going to be just fine, because the voltage is one 20th of the AC rating.

The trouble with PV modules, is that we’re operating at voltages above 30VDC… so one can no longer just “fudge” it with over the counter equipment.

I’m running a couple of Gewiss breakers myself which are really AC breakers, but they have a DC rating in the spec sheet. They lack the special magnetic cage etc etc, but they are also only rated 50V per contact (so two in series is fine for the 24V system I use them in). Since one of them used to trip at least once a day… I happen to know it’s just fine in this application. But I did the due diligence back in the day and made sure before I used them…

Thankfully, these days, the NoArc breakers are affordable and one no longer need to shell out megabucks for an ABB with the right specs…

and probably for those of us who want to play DIY, if the fuse/breaker/switch etc. you want to buy over the interweb does not include this level of information, look elsewhere or get someone that knows what they are doing to rather do it… (from a df fuse catalogue). 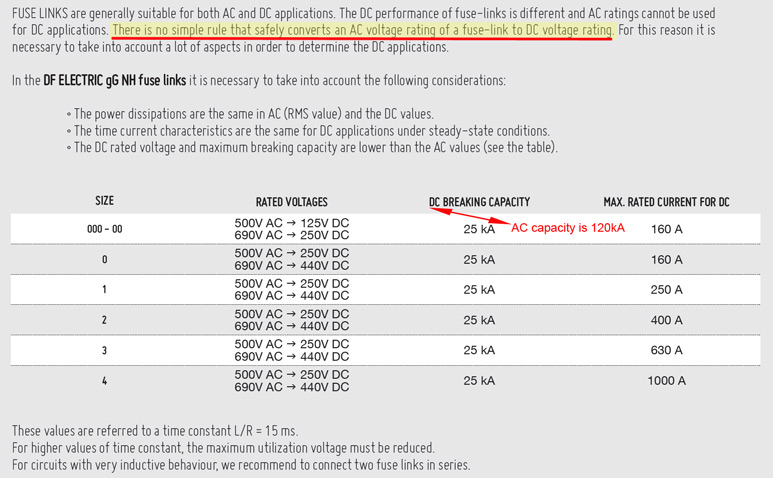 an 8Amp circuit is “protected” by a 40A breaker

This is something that WAWAS (wise ass with a screwdriver) just plain struggle with… protecting the device vs protecting you from the device. I think most GWABs (guy with a bakkie) also generally get this wrong.

Is there a difference between AC en DC fuse holders?

from what I can see some fuse holders (disconnect type holders like the ketos, mersens etc.) have both AC and DC utilization ratings but some have only AC ratings. Where they have both, the DC rating is generally lower than the AC rating.

example from an “Apator” catalogue 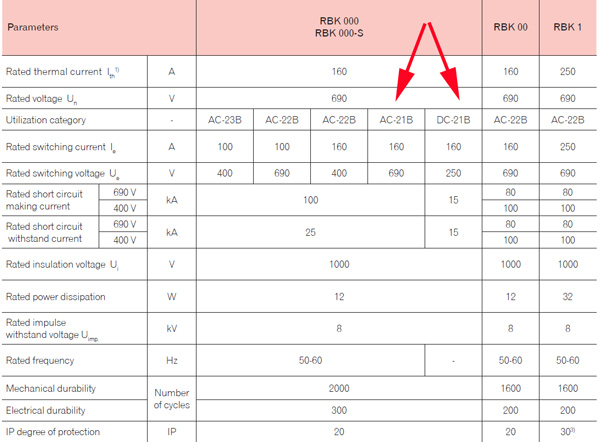 I use GEWISS 90 MCB breakers on my PV side in conjunction with PV fuses. The breakers I am using has this Maximum rating in the specs:

I used breakers from the same family. It’s only 50V-55V per contact, so you have to series it to get to 220V. Snapshot from the pdf sheet:

So to break 220V you’d need a 4-pole MCB, with all 4 poles in series. You can use two for the positive and two for the negative, as in the last picture to the right.

That’s the first Gotcha. The second is that these breakers don’t like running hot. I’ve already replaced two of them with Noark breakers, because at full current they get hot, and they derate quite significantly. For example, my breakers were running at around 60°C over noon (part of the reason I replaced them!) and as it turns out, above 25°C they don’t break at their rated current, they break earlier. My 40A breaker breaks around 28A under these conditions. So again, not the best breaker if it is going to run at capacity for long periods.

If they are sized for the cable, and maximum continuous current they will carry is 75% of rating, and you can series them up to 220V, then they should be fine.