What happened to Murphy?

What happened to Murphy?..

Absolutely nothing, he’s alive and well…

Up to his bull"law" as usual. Believe me, I know the guy well…

Before this conversation can start, perhaps everyone should be on the same page as to what Murphy’s law actually is?

If you tell someone how well something you have is working it will break the next day. 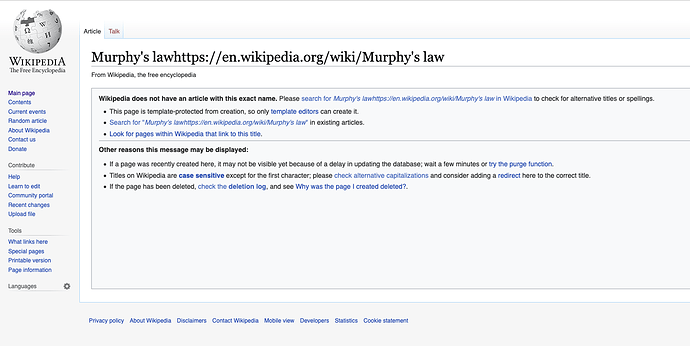 Remember, Murphy is an optimist!

The saying, and “Bob’s your uncle” … he is Murphy’s brother.

The story goes that Murphy was an engineer who said that a particular mechanical part has to be made in such a way that it would only fit in one position, because if it is possible to get it wrong, someone will get it wrong. A rather common-sense position. Then it got dumbed down to the much simpler “everything that can go wrong will go wrong”, which then also grew a few corollaries:

There is also this song which I quite enjoy, but you need to understand German for it.

On my way to you, all the traffic lights were red! And the only available parking spot was absolutely forbidden to park.
I forget the flowers on my way to you, I take the ring from my pocket and I know you will say no.
So it is decreed by Murphy’s law.

Is she beautiful? Then she will have a boyfriend. Is he handsome? At least as well! That is Murphy’s law.
Before the wedding still slim, thereafter grows the bum and the stomach. That is murphy’s law!
When you’re just having fun she becomes pregnant. And when you’re serious, well get back in line! There is already someone else there. That is Murphy’s law.