Really nice to see this detail on VRM!! 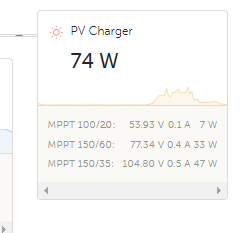 It’s a really nice bit of kit, by the way…

Update the firmware to the MPPT RS just to be sure (there is a small bugfix related to battery vs PV side power). If it persists, take it to community

I see there was a post about something similar so I just added it to the discussion. @MV has acknowledged it so it will be looked at.

I only have loads on Critical Loads (AC1) so should see no output on AC2.

Pic only shows AC1-out and AC-in but I do see large large loads on your input if nothing connected except multi then I think two possible causes;

I’ve also noticed a few Watts on AC Loads. Not sure when it started, but I assumed it is because AC loads is a calculation. For example:
AC Loads = Total Loads - Critical Loads.
Not sure how total loads would be calculated, probably some calculation as well from the energy meter + inverted power.

Anyways, the moment such a calculation is required and your inputs aren’t taken at the exact same instance (which is probably technically impossible) then some “AC Loads” would be “created” because your critical loads are fluctuating.

Anyways, I’m guessing here, haven’t bothered me enough, but I’m sure that Plonkster would drop by this thread soon and explain I’m wrong and give you the real reason.

Edit: was looking at the wrong point, mine is fine.

For me the strange aspect is that I have NO AC Loads (AC2) - everything is on Critical Loads (AC1)
Today was better but I had a spike of 395W - will monitor and maybe a=do an excel dat download when I have time.

A new change I’ve noticed is that you can now control a few basic things, as well as the Venus’ relay, directly from the VRM interface! Very fancy. No more need for Remote Console in some instances. Thanks developers!

And off-course I would go and break something … man, what a pleasure that Victron responds and fixes.