Hello,
so after a few non sunny days I decided to borrow the petrol generator and top-up my batteries and at the same time prepare my self in case we have very cloudy weather for more then two-three days.

Attached is the wiring layout. Once the generator was on, I got clean 230V on the output, but once connected all, when the relay test was being initiated - it failed

What am I doing wrong? 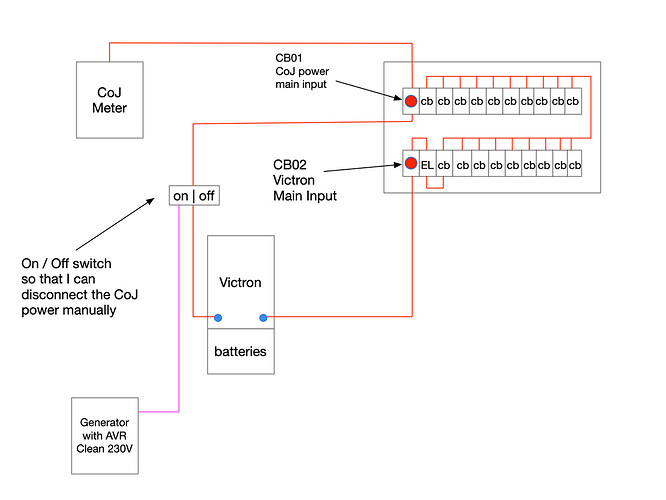 The grid relay test can fail for a few reasons, mostly it fails when it cant detect a Bond between Neutral and earth on its input side or if it sees a bond between earth and neutral on its output side.

In your case, i suspect its the first one.

Try to earth the Gen or create a temporary bond between neutral and earth at the gen.

If you go to remote console - device list - Your Multi - and down to Alarm Status, the last row will be Ve-bus error 8/11. That section will give a code for your error. Please post the Code here, that will give an indication of where in the test ists failing.

What type of generator is it?

Earthing did the trick.

I never connected the earth wire as the generator was on the tiled floor so didn’t know it was needed. I was wrong

If you go to remote console - device list - Your Multi - and down to Alarm Status, the last row will be Ve-bus error 8/11. That section will give a code for your error. Please post the Code here, that will give an indication of where in the test ists failing.

Yup, I was about to suggest that. The Multi does a string of tests, checking for a bond on the input, no bond on the output, that the bonding relay itself works (close it, measure, open it, measure), so it literally goes through about 8 tests. Internally the steps are numbered from 8 down to 0. If all tests pass, it reaches zero and that is “normal operation”. When it fails, it reports the step on which it failed, and then you know what is up…

The GUI helpfully even decodes it for you. And logs it to VRM too.

Fully understood and agreed.
In my situation this is to be used in odd occasions when in “desperate” need…

I will still connect the earth to the solid ground, just to be safe.

This isn’t a case of breaking a speed limit slightly, (being a naughty boy) it is like driving the wrong way down a one-way street (being suicidal).

You should use the COJ supply to charge your batteries in this situation, or get a proper standby generator.
If you connect your neutral to earth now I expect your generator will pop.

By earthing his generator, the relay test passed, this means the earth and neutral is all ready bonded inside the Gen, otherwise the relay test would have failed again.

That is not the issue.
The issue is that he is likely to now have two different earth potentials between appliances in his house with 115V between them.
Somebody who touches the right two appliances simultaneously might want to sit down for a while.

Is this only an issue if he doesn’t flip his main breaker before connecting the generator?

I’d say No. Whilst opening the main MCB may resolve some issues plenty of safety concerns remain.

A house is wired under the assumption that Neutral is at the same potential as Earth and that Earth path return is tested to be of a certain quality.

For example, when an appliance is switched off, the Live is broken by the switch in the wall socket. The whole appliance is dead and even though the neutral is still connected it is at earth potential.
But with a centre-tapped earth the neutral is also Live, so to be safe a double-pole switch would be necessary to make the appliance dead.
So there is an expectation that something is safe when it isn’t.
Likewise, DBs are wired with MCB’s only in the Live.
Again they will no longer kill their circuits either.
The quality of the new Earth is now in question, and this will have implications for the Earth Leakage protection.
Depending on where the existing neutral is earthed might mean half of the generator will have a dead short across it and start a fire.

I am not really sure of all the implications, but I’d imagine there are a few more than what I have just rattled off.

These type of generators are made for double-insulated tools as temporary supplies with the expectation that there will be no earth leakage protection. Therefore the manufacturers centre tap the earth so that it only possible to get a 115V shock to Earth. The permanent installation of your house is done under an entirely different assumption.

That is not the issue.
The issue is that he is likely to now have two different earth potentials between appliances in his house with 115V between them.

I don’t understand the issue, you said if he bonds neutral and earth he will blow the Gen. I say, it seems like it’s already bonded because the relay test passed after he earthed the Gen. If the Gen was earthed to the supply earth then there can’t be two different earths with a potential difference between them. In short what am I missing Phill.

But if it was center tapped… then absolutely. You would not be able to connect it to a house in South Africa legally, and any attempt to bond TN would likely damage the device.

I’m going off topic a bit, but I’m just trying to think of the costs. Why do you want to use the generator to charge the batteries and not use the municipal supply to do that either by adding a scheduled charge to bring them up or by letting BatteryLife bring them up to 100% after a couple of days? Or is just to take the generator out of the garage and let it run for a little bit.

In one sense you are right there is only one earth potential. Although I am sure by now you felt some unfunny tickles between unconnected Earths in your time. Still nothing really dangerous just unpleasant.

I don’t understand the issue, you said if he bonds neutral and earth he will blow the Gen. I say, it seems like it’s already bonded because the relay test passed after he earthed the Gen. If the Gen was earthed to the supply earth then there can’t be two different earths with a potential difference between them. In short what am I missing Phill.

I am not really sure of the inverter’s test, I think it tries to establish whether the system is earthed and not floating. Normally, on a permanent domestic installation, the Neutral would be earthed.
But on a floating system, you could earth the Live, or somewhere in between. You are only providing a reference point.
A domestic installation is wired under the assumption that it is Neutral which is earthed.

Like Einstein theory of relativity, everything is relative. But relative to what?
With electrical circuits, we generally talk about being relative to Earth, because we (humans, as a terrestrial species) are generally somehow in electrical contact with Earth.

Also if we reference circuits to Earth all circuits are in electrical contact with all other circuits that reference Earth as well.
The Neutral of this centre-tapped generator has a voltage 115V from Earth (as does the Live). If now, this Neutral is connected to an earthed Neutral ( as is the case in a domestic installation), there is a potential difference of 115V with Earth connected at both ends.

So Yes you’re absolutely right, a potential difference between them can’t exist.
This is a short circuit, and bang he will blow the Gen. ( Unless something trips).

So, right now he only has one Earth on the circuit.( Otherwise, he’d be none the wiser and the test would’ve passed).
The Earth is in the wrong place electrically and unsafe in a domestic setting, as I have already outlined in a previous post. (I am sure it will be a centre-tap Earth on this type of generator, not neutral earthed).
But, if he now applies a second Earth reference in the right place, he will short-out half the voltage of his generator.
There will be two earths at different electrical potentials on the same circuit. Which as you point out will not be allowed to co-exist.
To quote the Highlander “There can only be one”.
I hope that makes sense.

@Phil.g00 , I think you erred on assuming this generator is center-tapped. If it was, everything you are saying would be correct. But if it was, the Multi would not have let the relay test pass. I think we can let it go

Nothing to do with earthing or “center-tapped”.

Know of a case where a grid-tied user needed to recharge the batteries during extensive repeated LS events.

Inverter refused to tie with the generator. The user was a electrical engineer, so he already deduced that it was an earthing problem and/or generator too “unstable” for SA “Grid Code”.

With advice from Victron experts, the solution was to disable the Grid Code during these extended LS events if he needed to recharge the batteries, and put the code back when the gennie was off again. Messy, but it works.

That disables part of the relay test and allows it to connect. You need “the password” to change it too

Edit: But… I am pretty sure you still cannot get away with a center-tapped generator. The Multi has TN-bonding as a requirement. You may be able to get away by leaving the generator floating (which is a bad idea of course), but that is as far as you’d get.

@Phil.g00
Just to mention that all CB in my house DB are double pole, so once flipped to off - both L and N are disconnected (completely isolating the house from CoJ supply).

That said, first I fully disconnected the CoJ power as well as return to its neutral/earth (natural is earthed by the meter). Then I put the Gen on with its own L and N+E…

Is this not a direct and full replacement of the CoJ supply?

Once more, this was just to try and will not be used in any permanent scenario. Also, as @fredhen said, it doesn’t make any financial sense