The Kitchen has a 2-pole 40A breaker as its Main Switch and the main DB has a 40A single pole breaker feeding that live. The main DB breaker is quite old and they take turns to trip if we’re using too much power from that side. (The usage problem is being handled separately.)

How would you make the Kitchen breaker trip first? I’ve read about “selectivity” in breakers, but not sure how to apply that in a domestic setting. Curve C & curve D is the closest I get (also from the on-call electrician), but that’s really something else.

Obviously I can make the Kitchen breaker a 32A but that doesn’t really solve the issue. Cable is 10mm2 so the main DB breaker seems appropriate.

Am I missing something here?

The easiest (read cheapest) solution is to make the kitchen side smaller, or 32A as you say. I assume that “doesn’t really solve the issue” means that because you sacrifice 8A, it actually makes the tripping problem worse (at least until the “handling separately” part is finished).

Then you are quite correct. The curve is the next option. Placing a C-curve upstream and a B-curve downstream should mean the downstream one trips first.

The trouble with these things are always the slight overloads, the ones that slowly heat up the thermal part of the breaker and (if sustained) actually causes them to derate. That might be something else to look at, make sure the upstream one doesn’t derate faster than the downstream one. I’m thumbsucking though, I’m not a sparky.

Yeah, if the kitchen were a flat with “someone else” living there I would just put in 32A and call it a day.

Problem is really the circuits are badly balanced as there were two sets of renovations done previously which just tapped off the kitchen. Issue has been better since day-time loadshedding is less: housekeeper wants to run everything once the power comes back: washing machine, dishwasher, iron, geyser & lunch.

Correct answer is probably just: No, don’t do that.

Here is an example from a 40A Gewiss breaker I’ve used in the past. 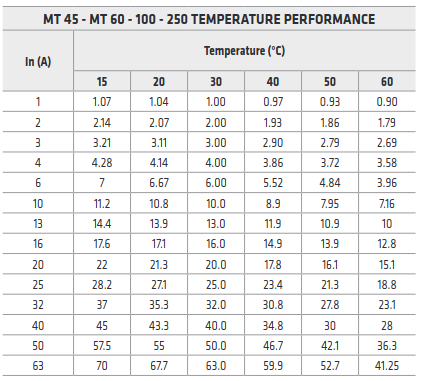 If the upstream breaker’s temperature performance degrades faster, then under sustained high-current use and high ambient temperatures, it will still trip first.

How come I know? Well, I used this family of breakers on a PV array (with enough contacts to get the voltage up), and a 40A breaker would trip at 28A, because they heat up over time.

How would you make the Kitchen breaker trip first? I’ve

5ka 40A in main board and 2.5 or 3ka breaker in the kitchen board would solve your issue. Only if there is no other loads drawing in between the main and the kitchen db?

That is the quickest way to cascade the breakers.

Read up a bit on breaker coordination

There’s nothing else on that cable, no.

Will do that then, thanks.

Not comfortable with that since then the cable would be unprotected. It is quite long and running through the roof in places. Far enough from the household, but not contractors

cable would still be protected.
let me give example

main municipal cable comes into garage through 63A main and then goes to 40A isolator which goes to a cable to the kitchen DB which has a 40A breaker. the 63A in garage is still there if someone chops the cable and the 40A in kitchen will protect cable from overload. 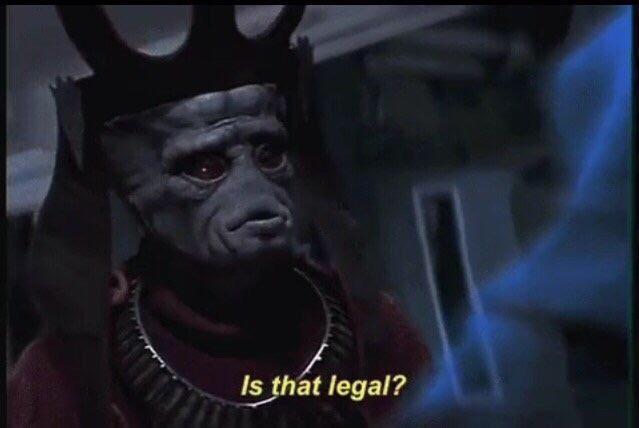 Not sure what SANS says but I have seen it done so would need to check.
But if you want to be sure then go the double breaker route.
I will see if i can find something in SANS 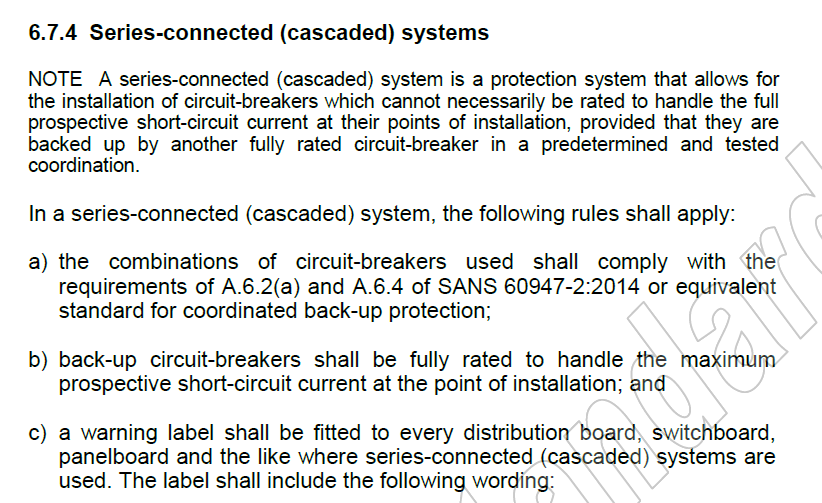 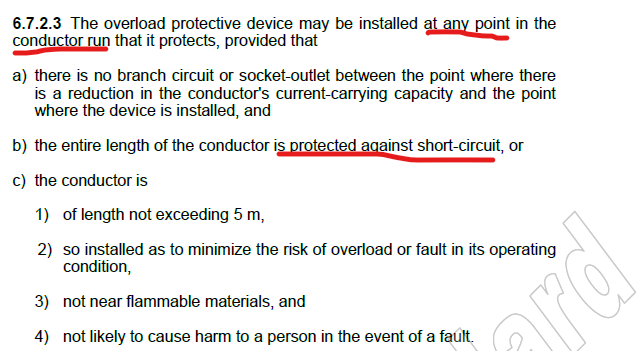 once again I’m not sure if the book i have is up to date, but in my example above would be legal according to this

I think point (c) is going to kill it. The kitchen Sub-DB is more than likely further than 5 meters away.

The problem with not having an upsteam breaker, is that a short circuit in the run (eg some inattentive DIYer drilling into it by accident) will not trip a breaker. Well, it might trip the up-upstream 63A one, but it’s all up in the air at that point.

I think point (c) is going to kill it.

The upstream 63A will cover short circuit fault current

if you dont fulfill point b

Aaaah, yes. Right. What does protected against short circuit entail though? Is Surfix inside conduit sufficient?

What does protected against short circuit entail though?

“protected against short circuit” would mean that you have a upstream breaker that can do that such as the 63A in my example.