I want to mount a 300W panel on the caravan roof and also carry a loose 100W panel for placing out in the sun when parked in a lot of shade.

Considering the big difference in spec, when the 2 panels are connected in parallel to a 100/20 MPPT, will the 100W panel in full sun produce if the 300W is mostly in shade?

Considering the big difference in spec, when the 2 panels are connected in parallel to a 100/20 MPPT, will the 100W panel in full sun produce if the 300W is mostly in shade

You will score nothing at all by connecting the 100 watt panel with the bigger one, no matter what…

EDIT: I just saw you are not planning to run them together, I missed that part… My argument is based on running them together
.

If you place two 72-cell panels of different peak power ratings in parallel, the power generally adds up, with some caveats.

There is a certain amount of influence that they have on each other, because they will not have the same Vmp (Voltage at max power). That usually means one or both of the panels runs at a voltage where it is NOT making peak power, so that in general placing them in parallel will reduce the total power.

If the Vmp’s are fairly close, the effect might be negligible.

Of course the final answer is simply to test it. And if you don’t intend to run them at the same time anyway… then the argument is moot.

If you place two 72-cell panels of different peak power ratings in parallel, the power generally adds up, with some caveats

It would not be the best option, but it also would not have no effect.
@JN.V do you have the votage and current specs for those panels that you can share?

Would the cell count matter?

The general assumption is that the VOC and VMP of 72 cell panels are close enough that they will help production if connected in Parallel. This is not always true… I have seen 72 sell panels cary from 44 to 53 volts… (VOC)

In general, doesn’t matter if its a series or parallel connected system, mismatched and different size panels is not recommended and the smaller of the lot normally affects the performance of the bigger panels in the array.

This is my experience, there might be times where its fine to do it, but personally I did not have any positive results.

I still have to buy a panel around 300W @Louisvdw
Ultimately the best will then just be to try it and see what happens.

If it doesn’t work out, I guess I could just put a breaker in the line to the 300W panel and switch it off when I plug in the 100W panel.

Aaah yes. I am half asleep here. Of course anything under about 250W tends to be a 36-cell module or maybe a 60-cell module. You are perfectly right there.

Would the cell count matter?

It’s a crude measure of the voltage. PV cells tend to make around 0.5V per cell under load, so placing two panels in parallel with the same amount of cells is an easy rule of thumb. But you are quite right, it’s the voltage we’re after. If one has a significantly lower working voltage, it would not work, and in extreme cases you could even be in danger of causing reverse-breakdown in the cells of the smaller panel (which destroys them).

. They can produce quite a lot of power.
This is on the 48V model 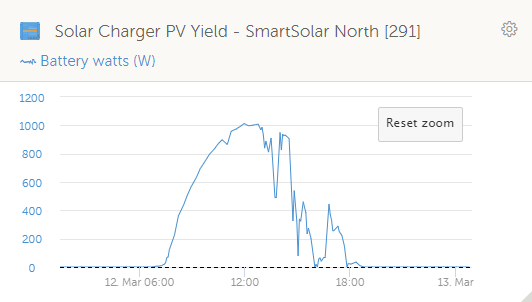 But if you need to go out and buy then rather use the old 100W for something else or sell it.
If the voltages are not close too the same you are going to have issues mixing them.

How about adding a big fat diode in series with each panel. Then if the voltages are close enough for both to contribute, then both will. If not, the laggard won’t impede the producing panel.

Use of these: BlueSolar PWM (12 / 24 / 48 Volt) - Victron Energy for the 100w panel. Small connector somewhere outside the caravan so you can plug in the panel when needed. I have if needed - PM me…

There are a few things to consider but I feel the most important for a parallel setup on one controller is the the cell count of the panels. As previously said the cells each produce approx 0.5 V. If in the ball park of the Voc and Vmp then the MPPT controller will do its best to get the most out of the array of panels.
If the cell count is different then the MPPT controller will not be able to set a bias voltage close to both panels Vmp at the same time as the bigger Voltage difference makes it impossible to get close to both at the same time.

A post was split to a new topic: Group Buy: Panels