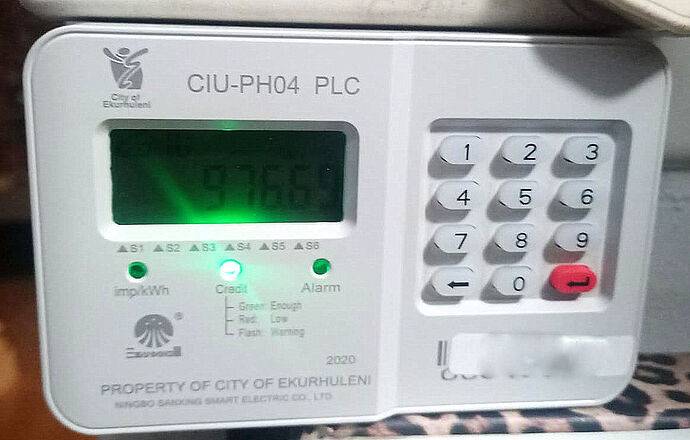 I am asking so I can advise a mate about his solar options.

I’d like to know if this is one of those sensitive meters that trip for the slightest power export when a load switches off.
Has anyone any experience with a solar system that is set not to export?

Some further insight into this.
This unit is apparently not the meter, but merely the customer interface to the pre-paid meter.
It is deployed around the Alberton area.
I think it may connect wirelessly. The meter itself is made by IKEJA electric.
I am still trying to find out if the meter is the “trippy” type for momentary exports after loads switch off.

No direct experience here, but as far as I recall, the “trippy” behaviour is typical of older prepaid meters.

Since this has a separate CIU it is already “newer”. Usually for these the behaviour can be tweaked with a code, but you’d need to involve the City.

I see that CIU is used by different meters in any case. Some of these test codes might help identify it further? http://prestige-metering.co.za/wp-content/uploads/2019/05/ACE9000-SSP-PLC-Short-Codes-and-error-codes_compressed.pdf

If this is not a new build, the actual meter might be present at the side of the house where the spinny one used to be…

If this is not a new build, the actual meter might be present at the side of the house where the spinny one used to be…

It is a newly installed meter, but the kerbside installation box is apparently locked up.
I have suggested testing it, but my mate reckons if something trips, it’ll be 4 days until a council worker turns up to reset things. Hence he is very reluctant.

At the moment, he runs a dead chop over onto a solar-powered homebuilt UPS. (TV, lights & router).
So he is happy during load-shedding, but if there is no LS and his batteries are charged his PV sits there doing nothing for him.

So in that case it reset itself after a timeout… Most of the split-type meters don’t actually have a physical breaker that needs to be manually reset, only the combined units, and again, mostly the older ones.

But a risk is a risk

I think it may connect wirelessly.

AFAIK these communicate with the meter over the power line.
Regarding the tripping, you would probably need to find the make and model of the actual meter.

The Conlog BEC23 also resets themself after a trip.
The feature to trip is more to make your stop doing that, and not to make more work for the utility so I would guess they all reset themselves.

I know only one meter that goes into tamper and requires manual intervention. Some Landis GYR meters do this. They call the feature SRE (significant reverse energy). It is programmable in the factory, if this feature is disabled it simply bills you for whatever goes in reverse. As I understand it, it triggers only on significant reverse energy, in other words, you have to actively spin it in reverse (or attempt to) to trigger it.

Thank you all for your replies.
It would seem that it would warrant the risk of at least testing the meter’s behaviour.