Correct. with grid I can pull say 5Kw… pool, geysers, tumble dryer and washing machine.
Now pool and geysers are on non essential.
we have a bad grid, it’s up and down all the time/not stable.
now suddenly it drops, to the point where inverter says no grid. and switches to batteries.
my current load is more than the max inverter setting, resulting in inverter tripping.
my max invert previously was 1750W, I’ve now increased it to 2500W.
Hmm just realised though, at times this has happened the actual isolator switches tripped, which again also does not compute as it should jsut be the inverter having a problem, isolator switches should not know of this.
G

would not mind having a proper once over/inspection… but the installer from PE does not seem to be keen to return any calls… as if he decided JBay is not worth driving to…
Need to find someone good/local that will be willing to come check things, with understanding all future work… and there will be, need more panels and batteries will be done through him/her.
G

my current load is more than the max inverter setting

But that is not going to make it trip, as long as the load isn’t more than the max capacity of the inverter.

As an example, if you have a 3kVA inverter and you limit it to 1500W (while grid tied), and then the grid trips, the installation instantly becomes an off-grid installation. Now the inverter ignores the 1500W discharge limit. At this point it has no control over the discharge current limit, the loads determine that. It has only a binary choice: Remain on, or switch off. In the Victron universe, it remains on unless the battery sends DCL=0 (discharge current limit), or some other tripping value occurs (battery voltage drops out, inverter overheats, you exceed 3600W for more than a few seconds, etc).

Hence me saying: It has nothing to do with the lower limit, and thus increasing the limit to 2500 is likely not going to stop this from happening.

I think I know who you are talking about, and I hear this too often about this guy…

so we need to find someone else…
G

so I have 2 x Pylontech 2400’s atm, which places the max battery capability at 2500W.
Inverter is a Multiplus 2

As said, the inverter is one thing… suddenly wondering why the isolator switch between the inverter and the Essential bar on DB trips. Switch on the right 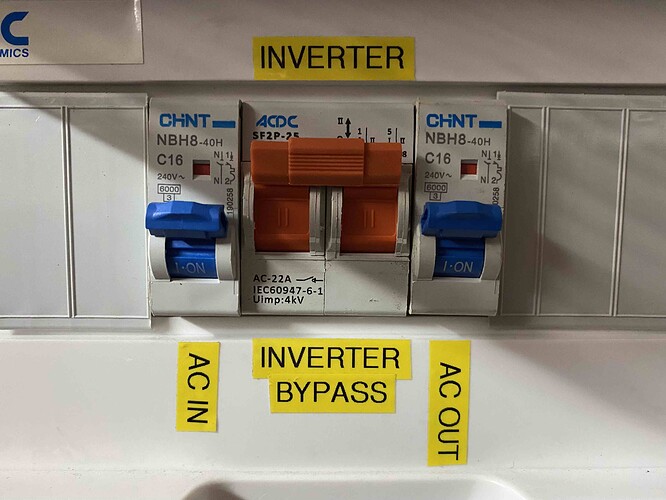 @Richard_Mackay
Shipping organised.
Any chance you can drop it off for me.
I’ll take one.
G
please see see my Direct Message for my contact number. then I can share contact details…

… might I ask you, if you can log onto my VRM and look at the logs, overload errors etc.
and advise.
G

so we need to find someone else…

Get hold of Ross at Solarvault perhaps.

Remember that that is the recommended continuous discharge rate. You can go above this for short periods (as much as four times the recommended rate for 1 minute). So this is not cast in stone and will not cause your inverter to switch off (unless something is wrong of course).

log onto my VRM and look at the logs

You have to provide the VRM url… I look at at least 10 of these a week, I forget which is which…

Ok will look at upping the max… and also enable the switch / disable of some “essential” loads via the in line Sonoffs.

I will PM you my VMR service name, thanks.

OK, so on 30 September, during a grid outage, your battery went down to 10% SOC, and the BMS sent DCL=0 and that’s why it switched off.

Those are the only two events I observe from here.

16A breaker, so good for maybe 3.5kW. We already know you exceed that. That breaker will trip in under a minute at 2In (twice it’s rating): 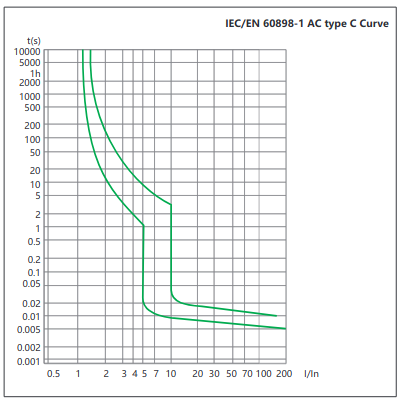 And the spec sheet says that breaker will derate to 85% (at 60°C) of its rating, and if you run at full power for prolonged periods your typical C-curve breaker (which has a thermal component) tends to heat itself up. So that may also have something to do with it.

At the very least I would try to up that breaker to a 25A breaker, if the wiring will support it (surely he used something thicker than 2.5mm^2 I would hope). Now this actually reminds me of a story I heard about a warranty claim where an installer also insisted that unless you have a 16A breaker on the output (because it is a 3kVA inverter) you cannot claim… which is nonsense of course. The inverter has a 35A transfer switch. You really think the manufacturer would oversize the transfer switch if you are not supposed to do that?

@JacoDeJongh , do you remember that case? I think it was you who asked me.

hi hi
ok, so that 10% SoC was me… we use pre paid this side…I thought the trip/problem was as per always, so went and reset things, and then continued with Washing and dishes and tumble dryer… not realising what actually happened is we ran out of power credits and I switched over to battery, and the promptly proceeded to drain the batteries, well prob a good test for them anyhow, as they’ve never really been depleted anything below 40% since installation.

Ok, so easier thing is to replace the AC In and AC Out switches ? This i can get my local spark to do.

So to understand the first halve of this discussion:

We have about 5 old dead APC ups’s at the office. Dead Battery. the max output of these units is 350W. enough to run a laptop and internet.

Can i replace the LA battery with these lithium Battery? We have guys working form home, and we just need something to keep the internet alive fro them. Internet and maby a laptop. (we have a 3D printer at work that we can use to print bigger battery compartments/addons for the ups’s sould a bigger battery be required.)
BlueNova Mobile Series Lithium Iron Phosphate 13V-8Ah-104Wh Battery - LiveStainable

i know its only 8A, so this unit in theory should last for the 2 hours.Less if you add the laptop.

While I have no definitive answer on these drop in replacements, you could also look into modifying these UPS’s to feed their 12v directly from the internal batteries to the routers, but you will need to confirm the router voltage requirements (12v or 9v) and physical plug size on the back of the router. This saves on the conversion losses from 12v DC to 220V AC, back to 12v DC.

Those UPSs usually have a very high idle load, probably more than 25W. The BlueNova can deliver 1.44A continuously. So that does not seem like a good idea…

We have about 5 old dead APC ups’s at the office. Dead Battery. the max output of these units is 350W. enough to run a laptop and internet.

But don’t you also have a hefty grid tied solar PV inverter (with storage) that generates plenty of 220V to keep these devices up and running??

we have indeed. A FOXESS setup. It work, but we have staff working remotly, that need something to keep the internet/laptop alive…
The laptops we are replacing the batteries, but not for the Internet. I guest, we can get them these internet UPS/s for that.

I would look at this for WiFi 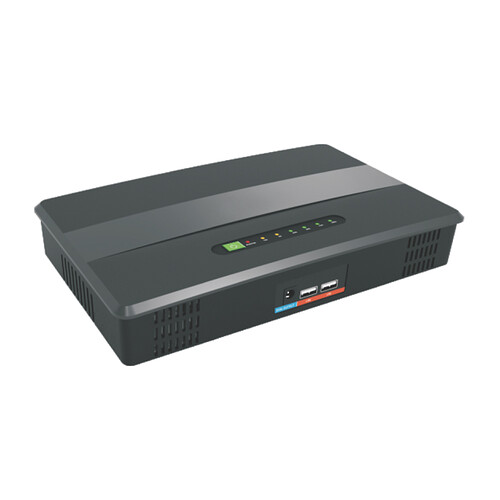 And upgrade or replace laptop batteries if they don’t last 2-3 hours.

The short answer is that you can easily run 2 routers on those small UPS. They will last 3h+ just on the normal 7Ah LA and I used to do just that with a ADSL modem and a Wifi router (about 20W-30W combined)

And you can also upgrade them and use those BlueNova drop in replacements. They BlueNova will give you much better usage (lithiums 8Ah 80% usage vs Lead Acid 7Ah 30% usage), but you need to watch out for the cost at ~R1100.
As mentioned their idle draw is high, and also while working is it high but still with that they will last a loadshedding stretch.
You might be better off getting mini DC UPS that cost less and have less loss.