I would like to know if anyone else has the rules for when the Aux port will switch on and off.

Ideally what I would want is:

What it seems to do is:

My setting for Aux: 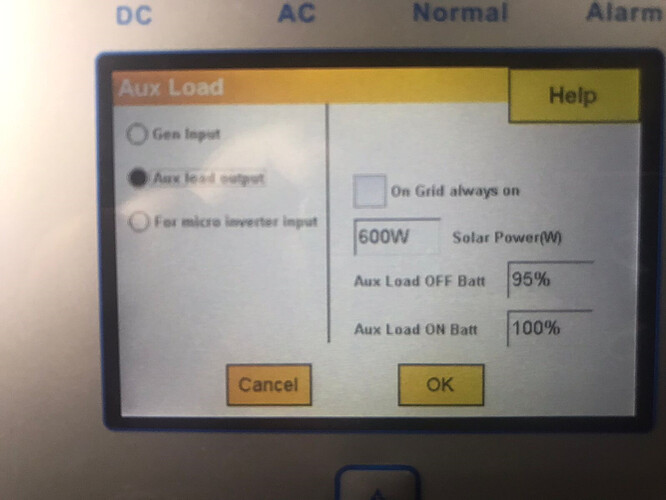 My usage where Aux did switch on:
Note: Aux was switched on when battery V was above 95%SOC due to charge , but dropped later to the 51.99V, it seem to have a timed delay to switch off once switched on. 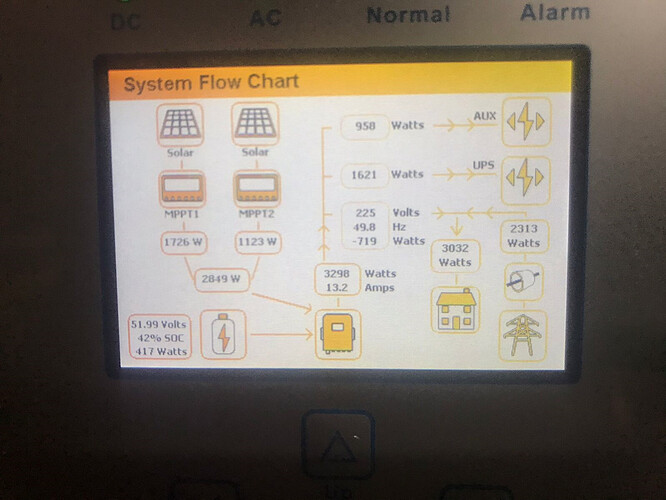 Hi @Ryeman, I am Plan on getting some wire tomorrow to hook up the geyser to LOAD and then there will be two of us experimenting with the AUX setting

@Ryeman, did you use a completely separate neutral for the AUX connection or did you use the same one for the LOAD

For completeness sake used a completely separate neutral, but if you look at the bonding relay diagram they do combine all the neutrals and all the earths and then bond combined earth and neutral connections in island mode.

This is where I am not sure if it is correct to connect all neutrals as in installation doc v3 diagram or only do the bond Earth to neutral on the load (for now I have combined the earths and Earthbonded only the load’s neutral? 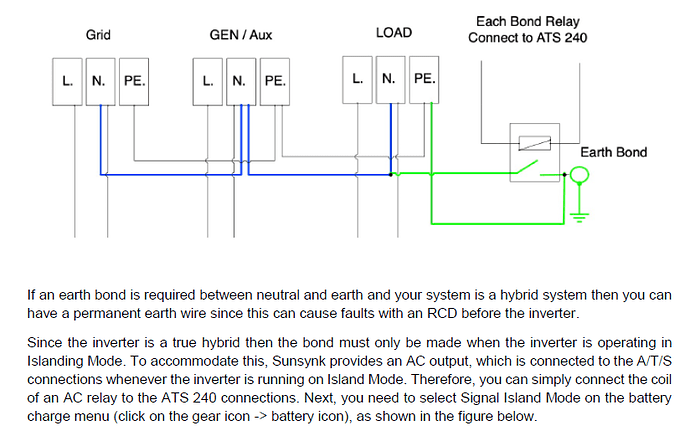 i have seen that particular diagram in the Sunsynk training manual, and like you, not sure how that would work, thought that the LOAD and AUX could share the neutral, would have saved me the hassle of running live & neutral 13 metres back to the db, but for safety’s sake, will do it anyway.

I suspect you’re not supposed to do that. If you do that, then in islanded mode there will be two bonds, one on the supply side, and another one courtesy of your inverter plus the bridged neutral. And SANS says you should not have that.

Will first need to do some more research , testing and validation on this

Finally getting to test my SMART LOAD function, set the solar load at 2200 watts ( 2 kw geyser and average 200 watt household loads ), the day started out as partly cloudy and the SMART LOAD switched on and off as the sun moved in and out from behind the clouds, then the sky became totally cloudy/drizzly, I switched the ON ALWAYS ON GRID function ( grid is available ), inverter draws power from solar and battery, NOT from grid, as I originally thought, AND did not stop at the preset cut off percentage on the AUX screen, I had to untick TIME OF USE, then only did the inverter draw from solar and the balance from the grid.
This experiment was conducted with grid available

I see on sunsynk site under technical support there is new topic that has “AUX” document by
craigcbos,
https://www.sunsynk.org/forum/techical-support/using-the-aux-output-on-8kw-hybrid

So my understanding and usage of Aux has changed, seems best used for when there is loadshedding and you have spare solar to run non ess things that would otherwise have been off and lost solar. Thus have the Pool, Geyser, Some other Circuits on Aux, with on grid always on and Solar power set to 0W and battery set to 80%, I do use Node Red now rather to control pool and Geyser on off rules and this will still work even under load shedding while battery capacity is still above 80%