Anyone have experience with solar thermal heating attached to radiators. Something like this: 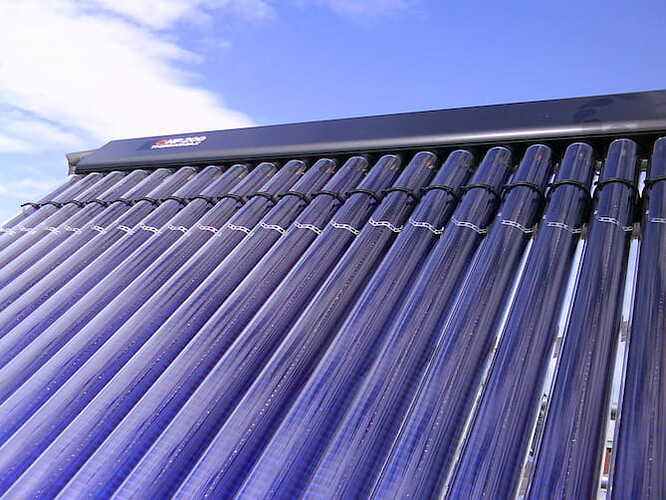 How do you heat a house with solar power?

How to heat your home with solar thermal or solar photovoltaic panels. Integrating solar with radiant heating, radiators, or air and ground source heat pumps.

This subject has been addressed many times.
Have a look at this thread: https://www.4x4community.co.za/forum/showthread.php/338816-What-do-I-need

Doesn’t seem to discuss the issue I am referring to. They talk about heating a geyser for showers etc, but what I am querying is heating the home in winter. So for example, there is a fireplace system that heats water running through it which gets fed to radiators throughout the house, but it cost about R100000 to do. I suppose there could be a similar setup with solar panels, but has anyone ever actually attempted it and got good results?

I haven’t tried, but it would seem a flawed concept because it would be geared up to give you heat when you don’t want it and not really when you do.

I haven’t seen water heating radiators since I was at school. Are there modern offerings of these?
You could use a solar heated geyser and get that heated up until it almost boiled during the day and then reticulate the water through radiators as required.
You would be better to circulate the water back to the geyser (which is probably what they do…)
So you would have heat for a while (like those electric water ‘bottles’. They start out hot but then lose their temperature)

There is a guy on youtube heating a warehouse with a solar collector and passive airflow. Cannot for the life of me find the video now, but I remember it from some years ago. I’ve also seen other schemes using a couple lengths of (painted) black aluminium gutter pipe outside in the sun and pumping air through it with a fan on the one end. But those are a kind of direct solar-to-air heating system. What you are talking about is a two-step process, solar->water->air.

It would be interesting to do an efficiency comparison. Solar->water is typically around 60% efficient. I don’t know how efficient the other end it, but I would assume that if you can get the flow rate right, you could get that quite high.

But as an exercise, compare that to running a couple of PV modules and powering a heat pump. If you live in a sunny winter area, I suspect it’s going to be a close comparison.

The ability to transfer heat will also be impacted exponentially as the water cools down. Newton’s law of cooling says the heat transfer is proportional to the difference in temperature. So that most beautiful of numbers, e, comes into play.

I also wonder about total system efficiency. Say it is 10°C outside, and 18°C inside. The cooler the water, the faster it will absorb heat, and the hotter it is, the faster it will release heat. But the direction you’re working in will slow you down. Which is not necessarily a problem, you may just have to make the system bigger.

I spent some time reading up on using these tubes for heating a pool.
People do use them, but you need quite a lot. In fact I came across an online calculator or two.
I don’t know where now, but they’re out there.
The thing was the calculator took into account whether or not there was a pool blanket.
You know these bubble wrap jobs. Well I can’t remember the exact figure, but it was substantial enough to impress me (maybe in the region of 15-25% ish) that you could downsize your heating system if you had one of these bubble wrap pool blankets.

Which brings me onto a point I have always believed in, insulation.
Money is best spent stopping the object cooling down rather than heating it up.
With a double-whammy bonus it saves you money when you need air conditioning cooling too in SA.

I was quite surprised to find that building regulations in Ireland stipulate the fibreglass ceiling wool to be a foot thick minimum. (300mm) I can’t ever remember seeing it that thick an SA ceiling.
In Ireland at least, they reckon the ceiling insulation pays for itself within 4 years.
So evidently, there is still a case for doubling or tripling your ceiling insulation in SA as a low-hanging fruit.

300mm) I can’t ever remember seeing it that thick an SA ceiling.

For cellulose it is 100mm retrofit (recommended, no law that says you must). 125mm for new builds (probably to account for some settling over the years). The pink/green fibreglass is 135mm.

For cellulose it is 100mm retrofit (recommended, no law that says you must). 125mm for new builds (probably to account for some settling over the years). The pink/green fibreglass is 135mm.

Ireland isn’t a particularly warm country in terms of its summer highs and its mean temperature would be a good few degrees below SA’s mean.
On the other hand, Ireland isn’t a particularly cold country either -2’s or 3’s being about it.
Same as SA and probably a similar number of days in a year.
So if we take it that the average human being prefers a similar indoor temperature indoors in both countries.
Then the temperature difference across the insulation is similar in both countries in winter and probably worse in SA in summer when it’s 50 odd degrees in the ceiling.
On that basis, you’d think they should have at least similar standards in both countries for insulation.
It would at least seem that people in SA would get an equal benefit from having more insulation or perhaps even more so in Summer.