A friend is looking at getting Sunny Boy 3000 TL-21 inverters. In future he wants to add a Multiplus II ESS using the Sunny Boy on the AC out side (inside the 1 to 1 rule thing).

I know the Fronius inverters can do this, but I seem to remember the SMA can do it as well with some feature limitation, but I can’t put my finger on it when searching.

Anyone know if the SMA can do this type of installation? This is an older Sunny Boy version, so I am also not sure if it is only the newer models that can do this or not? 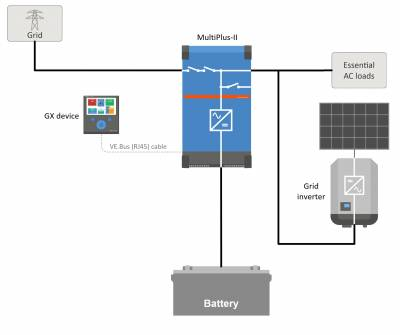 I know the Fronius inverters can do this, but I seem to remember the SMA can do it as well with some feature limitation, but I can’t put my finger on it when searching.

It works, but it cannot do grid-limiting. Also, using an SMA meter to do limiting is not supported (can be made to work, but causes small problems that can’t be worked around).

So if you can feed energy into the grid… then by all means use the SMA. Otherwise, rather go with Fronius or ABB/FimerSpa.

To get a bit more technical, the issue with SMA inverters (that initially made it impossible to limit them) has been solved in newer firmwares. The issue was that MaxLimPct register in model 123 was write-only, and the Operating State register in model 101/103 was not supported.

But… it is not supported in the GX firmware, and the reason it isn’t (at least yet) is because it’s not as easy as just turning the feature on. Specific detection would have to be added to first check whether it works, to ensure that it doesn’t attempt to use limiting with older units, but stillwork correctly with newer PV-inverters. Since there isn’t much demand for that (I’ve had like ONE request so far), and I don’t exactly have an SMA inverter on the test bench, it just hasn’t happened. It may never happen

That might then also be an issue with the Anti Islanding that needs to happen if the grid is down.
If it cannot limit then it will keep on feeding back power to the grid.