Does anyone have experience getting some sort of comms from this to be able to read the inverter data. There is an adapter board that is sold for around R2500 but not sure what this is doing. Are there any SMA agents still in the country.

I see the newer Sunnyboys come with wifi though.

I may be talking through my hat, but I have it in my head when I looked into it a few years back.
The SMA comms changed between the TL20 and the TL21.
The TL21 was equipped as standard with ethernet comms. This in turn allowed it to be recognized and visualized in Victron VRM.
Wherever I read this, I don’t know anymore.
I have been buying up secondhand PV inverters off eBay for several years now, and I made a mental note early on to only buy the TL21 version of the SMA inverters.
However, I have yet to install any of my SMA inverters, so I am no authority.
EDIT: As to Modbus comms I haven’t a clue.

Don’t all SMA devices communicate on their Speedwire protocol?
The Home Manager is the heart of their system and it uses this protocol as I understand it…

Friend actually has a multi plus in his system so he is trying to get the data from the sma into the victron vrm.

I’ve tried to do a bit of searching but info is very limited as to what the adapter board actually does.

And an email I dug up: 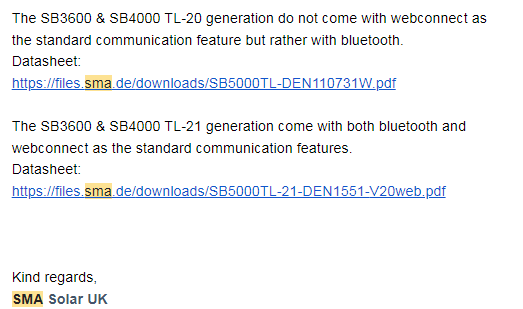 And an email I dug up:

Thanks for this.
The link doesn’t work.
Who can I contact with knowhow on SMA?

The link doesn’t work.
Who can I contact with knowhow on SMA?

I think that’s because it is a screenshot of my email, maybe if you type it out?
If it still doesn’t work, well I don’t have my original enquiry because it was lodged at the SMA website. It automatically generated a case number email reply, and subsequently a human response.
Quite impressive really.

Some of the small flat SMAs had only Wi-Fi, no physical ethernet port. I think most of them had some kind of sunspec support, which means if you can get them online, A Victron GX can read them. Power limiting does not work. Never has, and probably never will.

You can still integrate them. You just need to install an energy meter (eg Carlo Gavazzi ET112) and configure its role as “PV-inverter”. Then the energy meter proxies for the PV-inverter and tells the Victron universe what it is doing. Of course… still no limiting.

Edit: Also, very very unlikely they’d have a recent enough NRS097 certification, so you may not even be able to legally use them anymore.

This is the response from SMA:

Good afternoon,
This device(SB 4000-TL20) supports bluetooth and RS485 functionality. So it does not support the latest version of Home Manager (HM2.0) but it does support the old version (HM-10).

Friend actually has a multi plus in his system so he is trying to get the data from the sma into the victron vrm.

How is the system configured (are they separate systems??)

SMAs are basically configured as grid tie and the multiplies for backup with 2 pylontech UP5000. It’s the multiplus 1 though. So you can consider them as 2 separate systems

The SMA technical dept. does reply to emails (although a bit cryptic):

SMA Sunny Home Manager (Bluetooth) will work with the SBTL-20, just confirm as well that the SBTL-20 Bluetooth still works.
You can verify this by login to the device via Sunny Explorer.

I then asked if there’s a wired comms option and I received this reply:
The wired option was RS485, whereby the device could be integrated with what was called Webbox for monitoring only.
Here is more information on the Webbox > https://files.sma.de/downloads/SWebBox-BA-en-36.pdf.
Unfortunately this is out dated as far as the technology.