Both trackers shows nothing from this point onwards. The VRM logs also shows No Data for that time period. if it’s the RS450 1.05 version, how do I downgrade to 1.04 to confirm this? 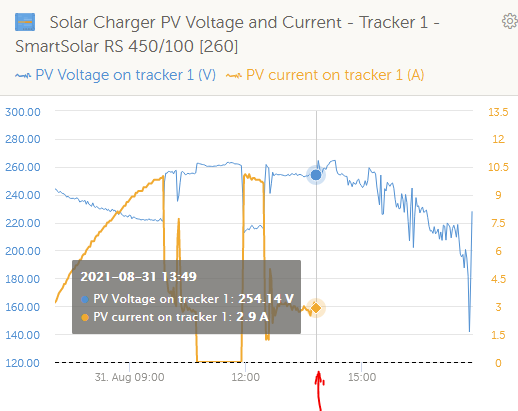 I think this is a known issue. Partly Venus-related, partly VRM-related. There are some fixes for this in the queue for addition to 2.80 (but not released yet). The multiple-tracker devices log individual values slightly differently and a lot of existing stuff looks for them in “the old place”…

Edit: Hang on. In venus 2.73 we stopped logging tracker current and instead log tracker power (because that number is more accurate). Current has to be calculated. It’s probably just something that needs to be fixed on VRM.

Thanks Mr. P. It’s not critical, just wanted to see how much current was historically flowing at peak times from the PV. Today with cloud flare was a good day, I just couldn’t see the current trend anymore - no biggie.