Is it worth rotating the master battery periodically - ie. Yearly?

I have 3x UP5000’s and I see the middle battery is normally 1 degree warmer than the other 2. They have an air gap between them but I am keen to maybe do a rotation at some stage. Do you think its worth the hassle?

All batteries are the same age so this isn’t an issue. 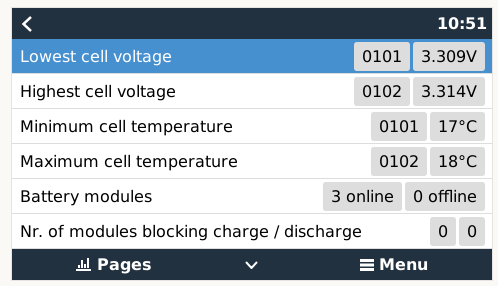 I really would not bother.

I was going to say something similar. Unless there’s a big difference in temperature between the middle and the rest (pushing operating temp limits) and you can see the middle pop up with large cell voltage differences I don’t think it’s worth the effort. I don’t think there’s anything wrong with a rotation though. It’ll most likely be cooler at the bottom, so if you are going to do it then just rotate the bottom and middle.

I also haven’t heard of issues with earlier US2000s & US3000s and until recently they didn’t have cell voltage & temperature data available and I think the only imbalance issues I’ve heard about was when it’s first installed or an extra one is added.