I know there has been some talk about cameras, and I recently got my father-in-law a new EZVIZ camera, the C3X. It replaced his old Husky Air (C3W). 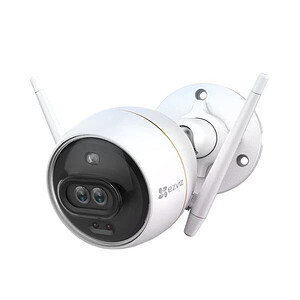 He is a vet with consulting rooms at his house, so he wanted a camera pointed to the entrance gate to know if somebody is waiting outside, and of course for general security. We had an old EZVIZ C3W which worked fine, connected to the EZVIZ NVR (X5C).

Person detection
First, the real reason for the camera was the built-in person detection. The old one’s motion detection was pretty much useless – it triggered motion (and thus recording and alerts) when leaves moved in the wind, if somebody walked past, if it rained, when cars drove past (headlights) and even when the sun went behind clouds. It meant that we disabled the alerts, got him a secondary Wyze V2 camera for person detection and that was it. The EZVIZ camera continued recording for archival reasons and he used it occasionally to check that everything was fine when he was out.

The new one is incredible, though. So far we haven’t had one false alarm, and it detects instantly when a person walks into the frame, including through the gate itself (something the Wyze cam struggled with). The camera’s lights starts flashing (or playing a sound, more on that later) and a couple of seconds later a notification comes through on his phone. Hikvision / EZVIZ did an excellent job here!

Night vision
Second, the night vision is color at night, as it uses two sensors/lenses to combine color and infrared images. It looks kinda weird, but pretty good: 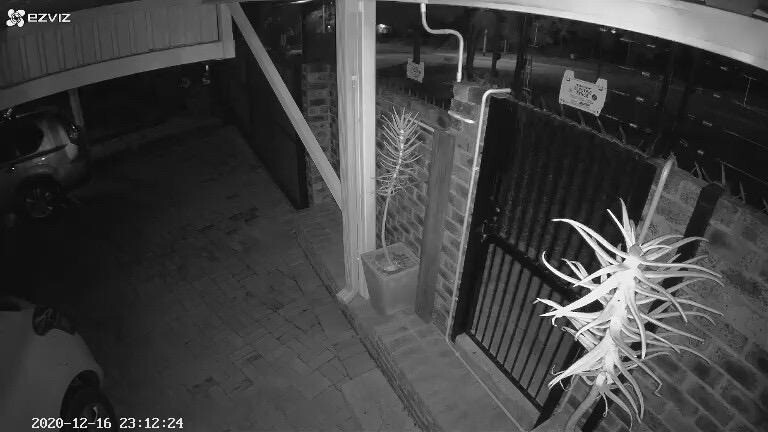 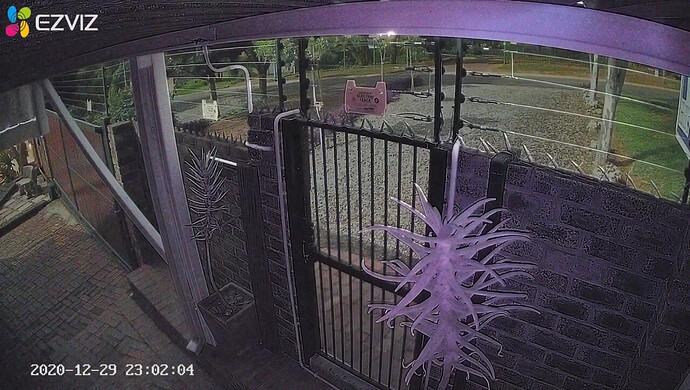 Bear in mind, this was just taken during loadshedding, so the only light is basically from the moon (no streetlights, and he didn’t have any lights on outside). Pretty good!

Installation
Installation was a bit iffy. First, we found out with the original camera that his wifi just didn’t extend far enough (around 30m, through multiple walls) so we had to lay an ethernet cable. Unfortunately the new camera isn’t POE either (there’s supposedly a separate, non Wifi version that is POE enabled, but no idea where you can find it), so you have to run a 12v power cable along with the ethernet cable, which is a bit stupid. Luckily that was already in place.

Adding it to both the app and the NVR was fairly simple, until the point where it somehow got a different IP address than the rest of the network and failed to connect to anything (the EZVIZ cloud, the NVR, the EZVIZ desktop software – none of it worked). I had to download the Hikvision SADP software to reset it to DHCP – no idea why that happened.

Also, the NVR is the weakest link in the equation. It doesn’t support the Smart events – so it relies on motion detection to record. It also doesn’t support H265, so I don’t get the storage/bandwidth benefit. While you can access the cameras from the app through the NVR (and share it with other users), it also means that you lose the benefit of the smart features, so you have to add the camera to the app/EZVIZ account separately too. This includes the person detection, the 2-way audio (which is also quite good, actually), the ability to manually trigger the siren (which is quite loud for a camera, but not as loud as a proper alarm siren) and the ability to tweak settings for any of these.

I also had trouble accessing the camera through the NVR on the app – even though I removed the old one from the NVR and added the new one, it kept on listing the old one and not showing the new one. After a lot of fiddling it corrected itself, but never adopted the new name I gave it in the NVR

EZVIZ does push their cloud subscription a bit, but it seems to go away after you’ve basically told it that you’re fine with on-premise recordings.

BEEP Alarm
Another kinda annoying thing is that most of the online reviews mentioned a couple of different in-camera alert options:

We specifically wanted it for number 2 – it’s loud enough that you know it picked up a person, but doesn’t sound like an alarm. He doesn’t actually want to chase away customers! But unfortunately it looks like they must have updated the firmware, because now on this camera the options are:

Conslusion
I think it is a worthy camera! The price is a bit too high for my liking (R2 699 on Takealot) but the person detection and image quality does seem really good. If you are already in the EZVIZ camp but sick and tired of false alarms, I would consider this camera!

More pics from the camera: 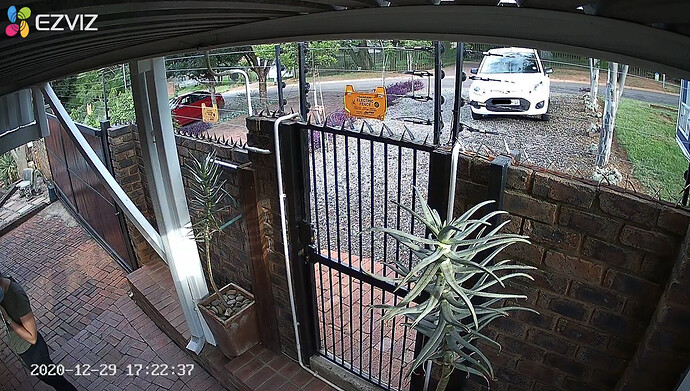 (Blacked out the number plate for privacy reasons, but it is quite legible) 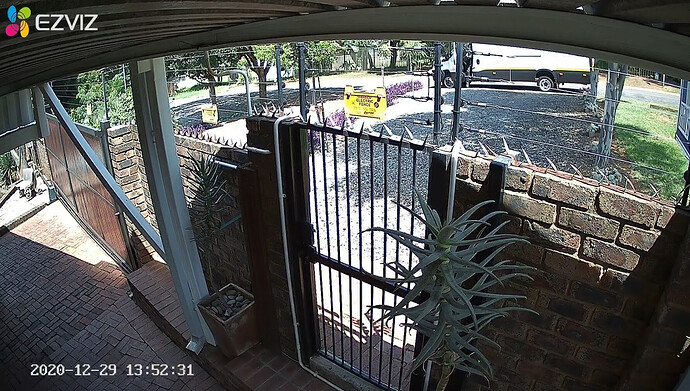 Thanks for this, I’m also looking at installing some cameras and this seems to do what I want it to.

I would need about three of which one would be out of wifi signal reach. But to lay in ethernet cable just for that one would be a huge schlep, so I’d rather look into those wifi range extenders that plugs into a wall socket I think.

Are these water/rain resistant? Or should is preferably be under a roof?

They are IP67, so they should be able to withstand the outdoors. They also feel quite solidly built - it has a heft to it!

I am not a fan of Wifi extenders - would rather look at a mesh network or perhaps look into Powerline Ethernet (AV600/AV1000)? You will have to run 12v to the camera in any case, and running a shorter stretch of ethernet cable from a the spot where you plug in the 12v adapter is perhaps quite doable?

One thing I should note – the camera you see earlier is connected via ethernet. Wifi reception in this case was also not great and we took the trouble to lay ethernet.

That being said, I really haven’t thought of using Powerline ethernet up to now – it is something that I might test with the hard-to-reach spots at my own place too!

I am not a fan of Wifi extenders - would rather look at a mesh network or perhaps look into Powerline Ethernet (AV600/AV1000)? You will have to run 12v to the camera in any case, and running a shorter stretch of ethernet cable from a the spot where you plug in the 12v adapter is perhaps quite doable?

Thing is, where my furthest camera must be at the garage, it is fairly easy to provide it with 12V power cable but not the case with ethernet from my closest router. This will prove to be one hell of a challenge.

How is Powerline Ethernet different from a normal ethernet cable? It sounds like this is one cable that does data as well as power?

It literally runs on your house’s electrical system. You plug in a device (bridge) into your wall socket. It has an ethernet port that you plug into your router/switch, and then it creates a powerline network on “the other side”. Then somewhere else in your house you plug in another of the same device and get ethernet out on that side, which you can then connect to a Wifi AP, a switch, a Playstation or a camera in this case.

So you need at least two units – I have this at home: https://www.geewiz.co.za/cables-adapters-accessories/25928-trendnet-tpl-406e2k-500mbps-compact-powerline-av-adapter-kit-.html It is the cheapest I could find and you will see it gets great reviews.

It works great for multi-storey houses where you have a thick concrete slab in the middle which kills Wifi and don’t want to drill through it to lay ethernet.

You also get units that combines Powerline AV and a wifi AP – similar to a Wifi extender, but it doesn’t talk to your router via Wifi but a wired connection across the powerline network.

Speeds are not comparable to 1Gbps ethernet, but you should get enough to run a camera from it. It is very dependent on the quality of your electrical system, though. They also don’t recommend that you run it across multiplugs (especially ones with surge protection) and I’m guess across a lot of different circuit breakers / earth leakage could also impact it.

So Power over Ethernet is where you run power over an ethernet (CAT5/6) cable. You typically get a switch with a beefy AC-DC adapter and have a couple of POE ports. Many security cameras work like this since it means only a single cable to the camera (CAT5/6). It runs typically at 48V DC. Most Hikvision cameras in SA support this, but do note the EZVIZ cameras do not support it (you’re always going to plug in a 12V DC adapter and run a dedicated 12v cable to the camera).

Powerline AV600/AV1000 is basically the reverse – it runs an ethernet network over a powerline (220V AC).

Fascinating, thanks for sharing! I’ve been living under a rock it seems with all this tech available.

Which one of the two would you suggest be the way to go? I’m prepared to fork out more $ for less hassles when it comes to laying cables, using adaptors etc.

My garage camera will be on its own db so no multiple breakers/multiplugs in the way.

I would need about 3 cameras in total but only one would be out of wifi range.

This Powerline ethernet seems the way to go.

Depends mostly on whether the powerline tech works at your place. When it works it is definitely waaaay less hassle, but if it doesn’t (or even worse, if it kinda works sometimes) then an ethernet cable is the way to go.

If it does work, it is bound to be more reliable than Wifi, especially further from your router. And going through walls a powerline is definitely better than a Wifi signal.

Let me put it this way: I have 7 Hikvision cameras mounted against the walls around my house, all running over POE. While it was a pain to pull the ethernet cables (Cat 6 FTP) it is super stable and super reliable, and the quality is great. And my Wifi congestion is much less.

BUT: I want to put another camera much closer to my pedestrian gate. I have a light there, so I have AC power, but the trunking runs underneath my paving and through my gate motor enclosure, so I really don’t want to run an ethernet cable through it as well. It is also further from my house, so Wifi could be a problem.

I specifically tested an EZVIZ camera at the spot with an extension lead, and the wifi will be ok, so I was willing to get one and install it with Wifi. But in replying to you I realised that AV Powerline ethernet could be an option and I’ll test it first before I end up buying the EZVIZ. I’m lucky enough to already have 2 units that I’m not using at the moment.

(Then again, the other Hikvision cameras in SA do not have speakers/mics, which I want for this spot, so I’ll probably end up buying the EZVIZ in any case).

Perhaps look at buying the Powerline ethernet units from Takealot, test it and if it doesn’t work, return it? Takealot is great in that regard, even if it is more expensive.