Alternatively, you can wait ( quite a while actually).

An easy solution for that: Turn on the inverter (obviously with the input and output disconnected). It will come on for a moment, and then die. now the caps are discharged. 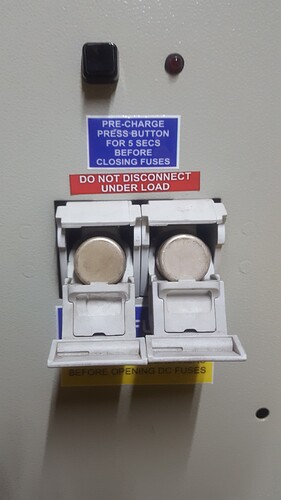 On my MLT inverter

I reckon the lamp option is a good one since it indicates how much current it’s using!
I have the same scenario when switching off a switched mode PSU. On the 4A and bigger the mains cap takes some time to discharge so clutching the PCB with one hand to turn it over can be a shocking experience…

The only problem is those 60w lamps are starting to get very scarce. No shop sell them anymore and it’s not really something you can find at a junkyard.

4x 12V lamps from MIDAS is also an option.

What is the size of the capacitors inside the multi 3000va? Wild guess 50000µF

reckon the lamp option is a good one since it indicates how much current it’s using!

Yeah, that would actually be a better option if you prefer a visual indication. When the lamps go dim, you know it’s charged.

size of the capacitors inside the multi 3000va?

Agreed! But there were many options of those incandescent lamps. You can still get oven lamps or halogen lamps at 220V. When you see one being thrown out grab it. You never know when you will need it…

So the capacitors are basically a dead short initially, going open circuit when charged.

So if you connect the battery via a, say 25ohm resistor, at 55V, you pass 2.2A initially, going to zero.

So, could you connect the battery via a push-button (capable of the 2.2A), a 25ohm resistor and an ACDC “48V” LED? When you push the button, the LED initially lights, then goes dark as the capacitor is charged. At which point you release the push button and close the main fuse / isolator.

Edit: This will be slowish, but the resistor could also be 10ohm, current 5.5A initially, which gives ~300W, but again, being so short you can undersize the resistor?

Edit 2: Then the LED also impedes the current. Does it burn out or only charge the caps over two days?

Edit 3: Sorry, thinking by typing this time… Obviously it just works without the LED, but is it possible to know when the precharge is finished, without (more) complicated voltage monitoring?

but is it possible to know when the precharge is finished, without (more) complicated voltage monitoring?

I can think of two options:

You quite right. I use a 10ohm 25W resistor EVERY time I connect battery to inverter.
I = V/R
So current = 50/10 = 5A which is fine as it is only for charging the capacitors for a second or two !
Then quickly connect the battery to inverter directly and that is it !

OK, that seems easy. I wonder if anyone would be willing to test how well it works with the ACDC 48V LEDs… specifically if you can stop as soon as the LED drops out, or if the sparks are still there and you need to press the button longer (in which case the LED is moot).

Now who do we know with a bunch of these nice blue inverters on their desk?

Haha ok. It measues 70Ω when cold. Calculation says it goes up to about ten times that once it gets hot.

So I know this is overkill, but the LED idea keeps sticking in my mind…

So it needs to work over a wide voltage range, otherwise it goes out too quickly. I found this circuit for a Wide Voltage Range LED using a FET, which goes up to 30V. FET datasheet.

Can someone recommend a different FET that would work from a similar low voltage up to 60V and still produce the 10-30mA current?

I think I would look into permanently fitting a large ferrite bead around the DC cabling to the inverter.
Inductive Reactance = 2(pi)F.L Capacitive Reactance = 1/(2(pi)F.C)
Normal running conditions F ( frequency) would be very low and so it won’t create losses.
But a rate of change of current would represent a high-frequency surge and it would represent an inline impedance.
Not fancy, won’t break, and always there even when you’re not.

I think this will do what you want:
https://za.rs-online.com/web/p/constant-current-diodes/1333334

I presume we are referring to a battery bank of 48V (or possibly 24V)
One needs a device that is rated at the maximum voltage so a 220V lamp will be slow.
Better to get a couple of 12V halogen downlighters. They draw 4A just to operate!
As the caps charge you can short circuit (or bypass) the lamps progressively to speed up the charging…