My highest recordings yet

It is 13h20 and overcast with rain from time to time.

Just observed the highest watts and charging amps on my setup as of yet.

Quite chuffed with my little setup 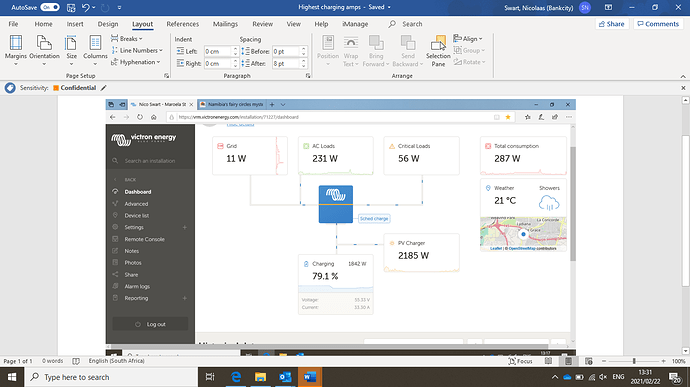 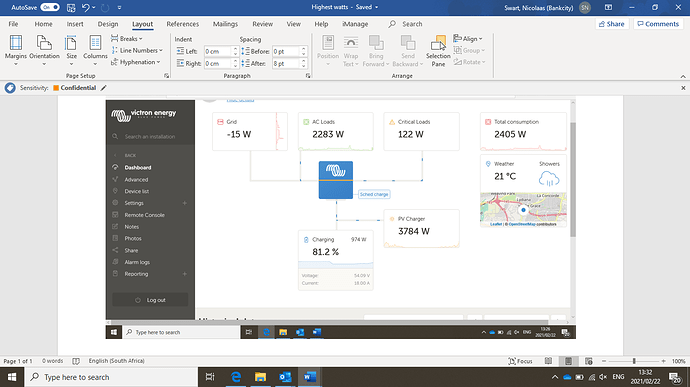 My 4.2kw array has seen a spike or more of 5.5kw on cool rainy cloudy days when the full sun breaks through for a moment …

I’m still waiting for mine to do this under those perfect cloud edge conditions.

My tree is going down this week. Cant wait to see the improvement. 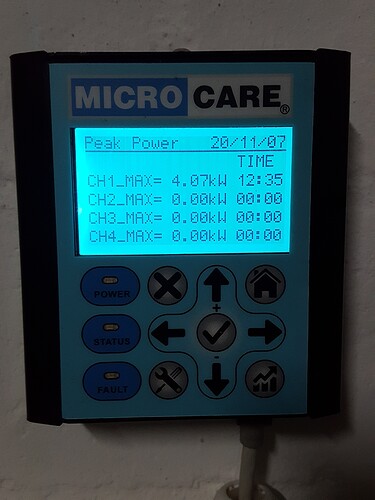 These were the best two days ever … that I actually saw … 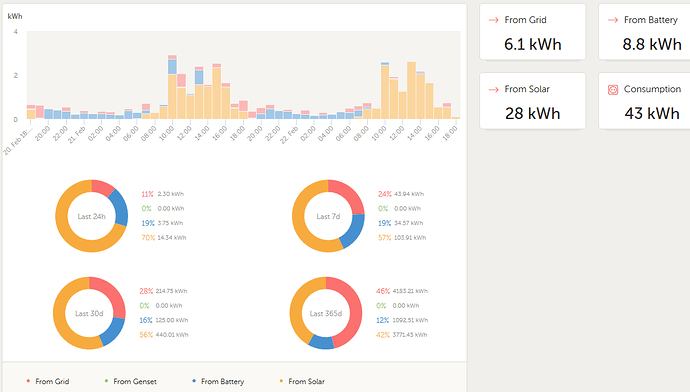 What was a HOBBY became a “hold my beer” moment when I realized it is cheaper to use the little system to feed the house circuits at night, re-charge on a Scheduled Charge when I have spare solar daytime than upgrading the existing bank, as the MP is 2nd hand, having had to repair it.

Because I only have a total of 12 cells, I cannot add these batts to the main system, so this was my HOBBY plan …

Caught my system doing 44 amps this morning but I was too late to screenshot it in time. 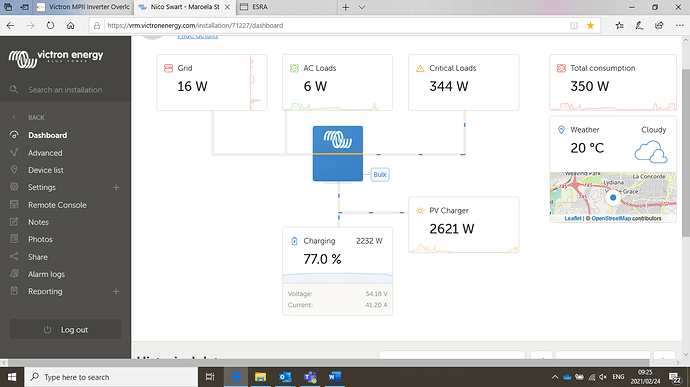 Check this one!!! Wil I not blow something up??? 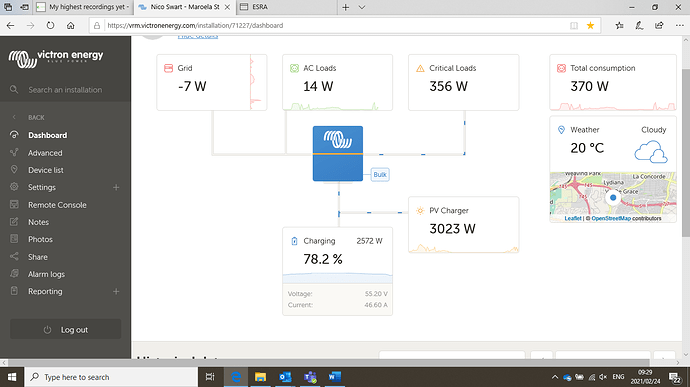 How is this possible?

3 strings per MPPT of 2 panels each in serie giving about 22 amps per string according to the panel specs.

This would explain it.

Thanks, I looked at them.

This sounds about right.

Very thankful that we have now reached winter solstice. These past 2 weeks I haven’t been able to get my batteries full with my daily routine.

Best I can get to is 95% after a full day, and this drops to 93% if the dishwasher also worked that day.

There simply isn’t enough daylight hours left. Thinking about 2 x 400W extra panels for next winter on a completely different location which must only be there for either the last afternoon sun, or the very early sun. (lots of shade in my yard)

But this will mean longer and more difficult cable laying/routing and an extra MPPT as the 2 existing ones are chock and block.

So at an estimated cost of:

I suppose it will have other advantages. Not worry so much about starting the kettle or toaster so early in the mornings when it is most needed, being able to start charging the geyser earlier etc.

I suppose it will have other advantages. Not worry so much about starting the kettle or toaster so early in the mornings when it is most needed, being able to start charging the geyser earlier etc.

It is winter … have you ANY idea how much cloud cover Cpt had this winter!

Like the one day I sat peeking at the production that day (actually weeks) with mostly clouds and very little rain, demoralized with but wot ±300w incoming at midday from my 4.2kw array.

Realised yet again, TTT, sit back and relax, have a beer, or two, cause even if you had an 8.4kw array, it would still only have been ±600w incoming.

I think that is great and actually might be good for your batteries. I wouldn’t spend any more money!

So I have still been able to get my batteries full using my automation. During the day, my inverter’s capacity is dynamically limited to available PV (so not draining the battery). I do have an input to allow a set abouts of watts from the battery to be added to the available capacity, but I kept that to zero for now.

Then at night, I specify a maximum discharge wattage as well, basically either 250W (if the next day will not be rainy) or 100W (if the next day is rainy). No very scientifically chosen. I still mean to automate that using the total kWh that I would like to discharge while the sun is down and the length of the night. Should be fairly simple to do. Also then incorporate the weather forecast for the next day to reduce the about of kWh I want to discharge in total.

So obviously this does not optimise my PV generated, because most of the time the batteries get full around 1500 (I mainly have West panels), so lose out on about an hour and a half, but I think it is fine. My goal is rather to get the batteries full every day and not discharge then excessively only to reach the minimum SoC with a number of hours left before sunrise. I’d rather discharge them slowly to get to that same SoC just before sunrise.

This is a much cheaper solution though if your goal is similar to mine.

I think that is great and actually might be good for your batteries. I wouldn’t spend any more money!

Probably fine for a day or two, but you do want your batteries to do some balancing. Don’t know what batteries he has, but apparently Pylontech doesn’t like to not be full at least one a week or something like that. Don’t know if it is true, just want I heard.

If he has active balancers, then I would never charge the batteries beyond 90%.

Probably fine for a day or two, but you do want your batteries to do some balancing

Man, once a week is ample. Twice a month is sufficient. It really doesn’t have to balance every day. One of the big selling points of LiFePO4 is precisely that you can leave them partially discharged for longer periods, why treat them like lead-acids?

This is seriously demoralizing!

I have lead acids but I suppose 95% is not that bad. Balancing wise, I have no idea whether my batteries are in good shape. Think I need to measure at some point in time.

Luckily our nightly use is not much. The house idles at about 200 - 250W when we sleep.

If you feel demoralized it always help when you compare yourself with someone worse of than you.

You could have been without any PV or batteries, or perhaps in one of the towns where Eskom cycle the power cause the municipality does not pay them.

Or like me you can be sitting on the shadow side of the mountain. I have about 2 months a year where the sun only catch the house from 11:30 and then only til 3pm. (except when the house above me cast a shadow over the north facing panels from 1pm - 3pm

I have to remind myself that I knew that before I installed the PV. And I actually just want the batteries to be able to work during loadshedding - the PV is just a way to pay back that expense.
I could add more PV, but then I need to pay off those as well.

Best to just wait, sit and enjoy a cup of coffee with the view from my shadow house until spring comes. 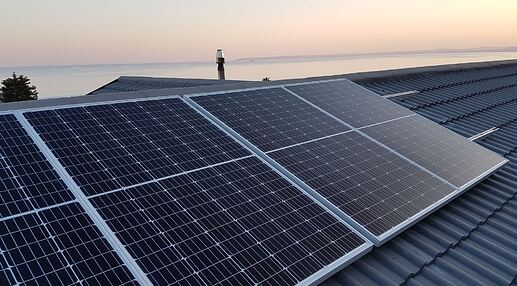 Best to just wait, sit and enjoy a cup of coffee with the view from my shadow house until spring comes.

And what a view!!

The other day it was overcast the whole day and I worked out that I was getting not more than 10% out the panels. Grid tied you still ok off grid its a problem. I’m going to wire my generator changeover switch so it can either run everything and disconnect inverters or to go straight to inverter to help loads and charge battery in case we have a prolonged period of bad weather