Why does it do this? This morning its the first time I’m seeing this.

I’m on Optimized with Battery Life, and and minimum SOC set to 60%

Why is the inverter not drawing from the batteries with they’re only at 78%? 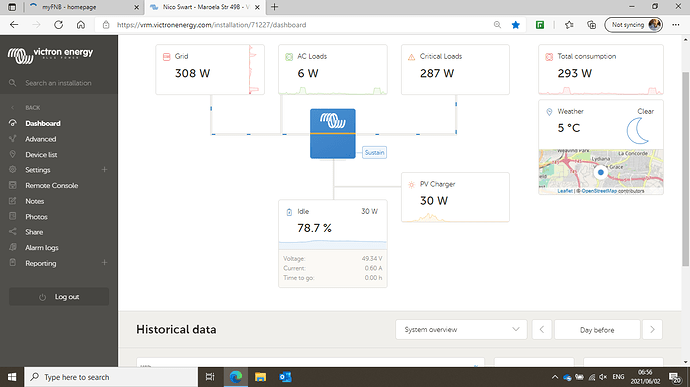 When you configure the ESS assistant, there is a voltage curve you set, what voltage it should stay above at what discharge level (up to 2C). If it dips below this curve, it goes into sustain. To get it out, it needs to go 1.2V above the highest part of the curve.

For pylontechs it is common to set the entire curve to 45V (a flat line) because the BMS decides when to disconnect things.

From screenshot it looks to be somewhere just above around 49V,3 then? Where do I find this to make sure what it is?

And what would be a good setting for my AGM lead acids?

Why I ask, is because I’ve had the batteries down to 60% SOC without this happening. At least, not what I’m aware of.

Could it be that when a load or 2 switches off resulting in the voltage settling a bit higher, that it will continue to discharge?

Mmmh for some reason I thought you were running Pylontech batteries. AGM then… okay.

Took the liberty and downloaded your config. Your curve looks fine.

Happened at 06:08 this morning. Battery voltage dipped to below 48V. At the time battery current seemed to fluctuate between 15A and 60A. So I would have to assume that at some point the battery voltage didn’t bounce back as fast as the current dropped, and there was a momentary period where the voltage was below the curve relative to the discharge current.

For example about a minute earlier you were doing 15A discharge and had a battery voltage of 47.3V. So you were around 0.075C discharge rate, which means that some voltage between 46.6V and 48V would have been the tip-over point. So it seems to me that’s where you ran into trouble.

The easiest way to fix it would be to slightly lower the 0.005C voltage. The other possibility would be to significantly reduce the 0.25C point, which is probably not what you want to do.

Keep in mind also that as the batteries age, the voltage will sag lower, and this will begin to happen earlier and earlier.

Happened at 06:08 this morning. Battery voltage dipped to below 48V. At the time battery current seemed to fluctuate between 15A and 60A.

Eeeek! That must be the wife with her %$#@ hair dryer! She is supposed to be laaankal finished with it before 06h00 as I am on scheduled charging from 04h00 - 06h00 (for the geyser) Guess I’ll have to extend it for another 30min or so.

The easiest way to fix it would be to slightly lower the 0.005C voltage.

If this happens more frequently, I will very humbly ask you to explain to me where to set this. For now, I’ll just extend my scheduled charging somewhat.

Keep in mind also that as the batteries age, the voltage will sag lower, and this will begin to happen earlier and earlier.

Hope it does not happen too often, the batteries are now just over a year old.

Thank you for your help, it always immensely appreciated!!!

Real men don’t “Eeeek” nor do they drink pink drinks …

I don’t do pink drinks.