Its been a while since I’ve been here as things are very hectic at work and also the reason why I couldn’t ask about this earlier.

Some troubling things happening in my setup.

During July and August, almost every night/other night I wake up to multiple grid lost/recovery warning emails. This mostly occurs during the night between 11h00 and 04h00 but other times as well.

As these are ungodly hours, I’ve only been able to investigate 2-3 times when I’m alerted to it early enough but still need to consider that VRM is much delayed at times to refresh.

So those 2-3 times I did manage to get to the DB quick enough, I have found that the grid was not off, yet the MP II shows that it was off and busy inverting.

Mostly off only a few minutes at a time before supposedly recovering, but up to 20 times some nights.

Could this really be an Eskom issue? Or maybe something on the inverter that is not right?

Is there a way to determine this by looking at logged data? Where would I look for this?

Look at July for example. 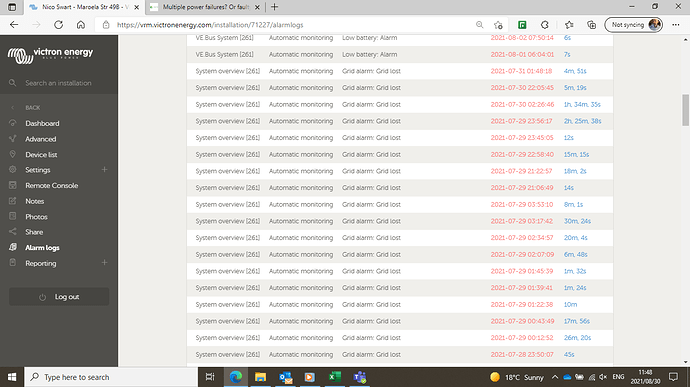 Dude… you should check out your input voltage at that time of the night! It’s clocking 254V at times. NRS097 says if that happens for more than 40 seconds (if my memory recalls correctly) you must disconnect. It’s doing exactly what it is supposed to…

When it switched off on the night of the 23rd, it was because you were exceeding 254V on the input. Better talk to your supplier… or if you want the inverter to accept this as okay, then you need to reconfigure the grid code to “other” and set a wider range.

bingo we have a winner

I added an input voltage/current chart to your advanced page

If ever you your VRM settings updates itself, then it is your local forum miracle worker

PS. @plonkster recently I see someone else’s install in my VRM as well as my own. Would that be a glitch? Not sure with who to raise it. And can they see my install as well?

PS. @plonkster recently I see someone else’s install in my VRM as well as my own. Would that be a glitch? Not sure with who to raise it. And can they see my install as well?

DM that to me, I’ll get someone to look.

I cant even find the input voltage you indicated above, but will look at where to find it.

Is this bad for the inverter? This has never happened before. And why only at night?

I wonder if somewhere repairs/maintenance in my area was being done.

If this is ok for the inverter, I could probably look into changing the grid code, but I don’t suppose my other household appliances would share this sentiment.

I added an input voltage/current chart to your advanced page

Thanks, let me see if I can find this.

Is this bad for the inverter?

No. It can handle even more than that, at least as much as 265V, although I don’t know the precise limits (but it is higher than that).

And why only at night?

High grid voltages are more likely during the night (and other off-peak times) because loads are low.

This makes sense. So this should be the case for my entire neighborhood.

At least everyone on your phase, that is to say, your direct neighbours may not be see the exact same thing you are seeing, but two doors down may…