This might be a silly question but where can I check if my Multi is currently throttling down power due to temperature?

The reason I ask is that it’s quite hot in Pretoria at the moment and I am running full-blast DC Feed-In and my one MPPT has dropped to ±20% power currently nearing mid day. When it was a bit cooler/earlier it was pumping at full capacity.

Something from the side line, Sarel on the other forum did this mod to his one: 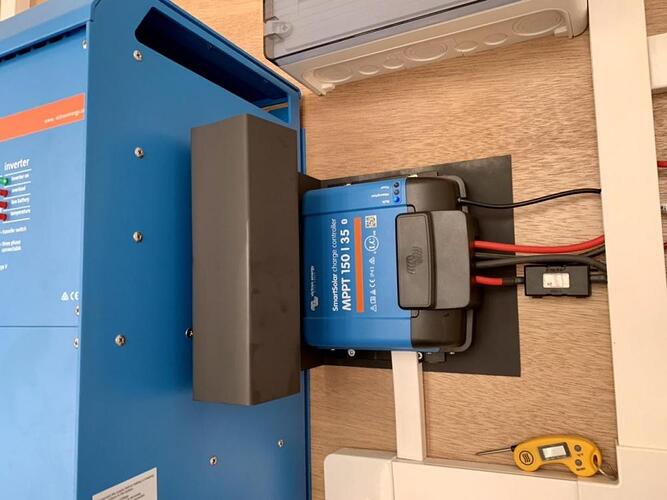 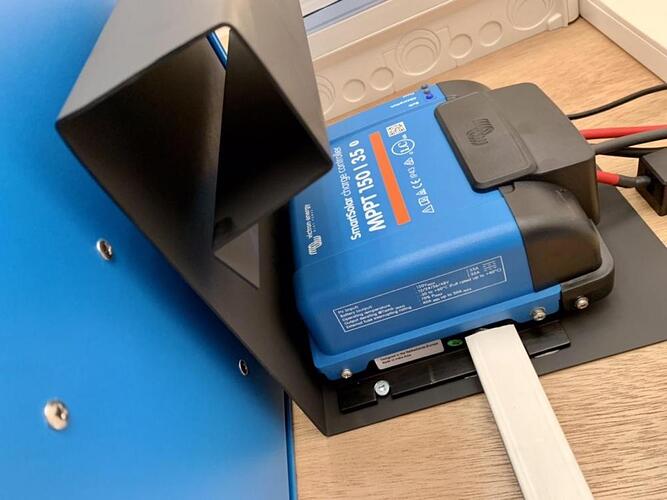 I also made a similar heatsink mod on my MPPT install 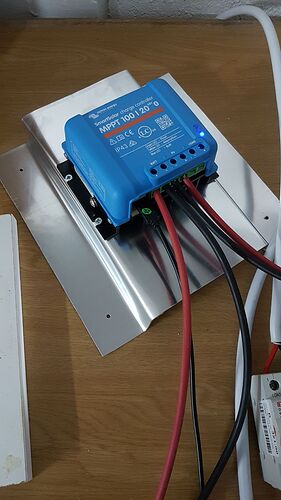 I will check how my perform when up and running with out summer and make a mod to if I need to. New house, new setup so need to check how the garage will handle it.

Is that thing mounted on its side? The heatsink fins go in the wrong direction. I think that mod might actually make it worse.

And so it did Borat. Go check his post. He picked up that it is running warm and did some changes and added a fan. New Micro grid system on BYD batteries going in @ 11.6kWp - Page 7 - Member Installations Showcase - Power Forum - Renewable Energy Discussion

He actually mounted it on it’s side originally for some reason. Then modded it afterwards when the existing sink obviously then didn’t work.

I’ve added a 15cm desk fan to each of my MPPT’s which run on a timer. I was originally using PC fans but they slow down over time and arent as effective.

Combined they pull less than 25W.

The issue is not the MPPTs throttling down, it’s the Multi that is running at ±4500W in the early mornings and starts to scale down as temperatures rise. It’s doing this by instructing one of my MPPT’s to produce less power. The other MPPT is still running at 100%. I want to know if there is a way to ‘see’ that it’s currently in a de-rated state.

You can do an assistant to see if the fan is running or if there’s a temperature alarm, and you can get the degrees out with VRM I think, but I don’t think “90%” / “80%” / etc is visible anywhere.

Does it show different behaviour when you stick a desk fan on it for the day?

The Multi doesn’t send any “I am throttling” signalling to the GX. It’s pretty much looking at the power on the input/output side… and if it appears to be about 60% of the advertised capacity… it is probably throttling.

I see it in my system too in December. In my case however, I have around 2.4kW of PV available at that time of the day, and the hot panels don’t really make full power either, so a throttling Multi actually balances things out a bit. But I also have fans in the top of the network case in which the device sits, and starting the fans restores the power production… so that is how I know it is heat-throttling.

All I can say is that fans are running, no issues there. After a while the MPPT in question ramps up to 100% again which tells me the internal Multi temperature has dropped sufficiently for it to go at it again at full tilt.

I think it’s noticeable at the 35-40 degrees C limit which I think it’s hitting at the moment. The 30 degrees C is so close to 100% that the perceived power production is ‘as-near-as-dammit’ to max power.

From this I deduce that there is no indication anywhere that it’s running in de-rated mode. It would have been nice to know so that people don’t start to look for ‘other issues’ when it’s working ‘as-designed’.

I once had an MPII 3kva, so 2.4kw, installed inside the house, cause at the time my sums said 2.4kw midday.

However, it dropped the output to 1.7 - 1.8kw midday on some hot days when the ambient temp inside was getting a bit high. Perfectly normal as it is designed to do that.

Yeah, I think that’s actually how you should look at it… Derating due to temperature is something you do during system design, not operation.

However, a Multi with a “internal fan running → toggle relay” assistant setup with an external 140mm PC fan can work wonders.

That is one thing I really dislike about the Multiplus - there are a number of design choices that means it is less efficient at high loads, so it heats and throttles. One is the undersizing of the transformer core, and partial window winding (to increase leakage inductance so they save on inductors). The other is the is the H-bridge topology - using fewer devices with larger gate charge is something that should be revised with the newer MOSFETs that are available.

undersizing of the transformer core,

It’s more a case of over-marketing the size of the device, and not so much because marketing people are evil… but more because everyone else is doing it (especially the Chinese) and you need to do it for comparison purposes. Since the primary market is off-grid (80% and up), and the inverter spends the bulk of its life not running flat-out, this can be justified to some extent.

If it’s primary design was grid-coupled, then yes, building a device meant to run at full power for hours on end, and then making it derate, would probably not go down well

Fwiw, there is a new model coming. The Inverter RS (which is a high frequency design) is getting a Multi-sibling. Probably middle of next year or so, but I have no idea when it will officially land.

Well, I know of at least one competitor that does not undersize their transformers. They are even pricier than Victron though…

One thing to keep in mind: Victron is not competing with Chinese inverters.

Still looks like an overly complicated solution to mounting the MPPT incorrectly.

at least one competitor that

Oh I know two… but both of them are even pricier. You’re absolutely right

One thing to keep in mind: Victron is not competing with Chinese inverters

Another thing to keep in mind: People are comparing everything to Chinese inverters