Good day
This battery is in a Mercedes Benz. Is there an alternative that can be used? Where in jhb can this be purchased from?
12 volt 84amp hour 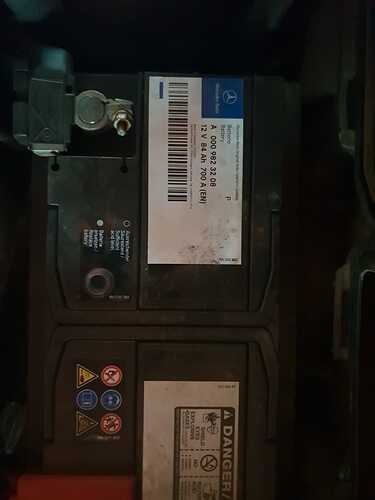 MB will have a supplier for that part. They don’t make their own batteries

The trick is finding an equivalent. It is probably as easy as taking the physical measurements, and looking at the orientation of the terminals, and buying whatever fits. The exact capacity isn’t all that important, a slightly larger/smaller capacity will not make a difference and the car will not notice.

For example, on my last Namibian trip my RAV4 lost its battery (which was funny, when I bought the car 5 months earlier, I told the salesperson that I can audibly hear the battery giving notice, to which he said that if it conks in I must send him the bill, which I did). Two problems: there is no indication on the factory original battery what you can replace it with, and in Windhoek I could not find a battery with the same dimensions. I did however know that the Hilux (which has a larger engine) takes a 668, and the 668 happens to have very similar dimensions (it is slightly smaller). So I bought a 668, installed it, put a rubber spacer below the hold-down to make it work, and it’s been running like that for over a year now…

On a side note, if anyone knows what size battery the previous gen RAV4 uses, let me know. I half suspect it is a 650… but with the terminals reversed, so probably a 651 or something like that. A good battery shop will have a catalogue… (conversely, it means I could not find a good battery shop in Windhoek).

Any battery shop should be able to hook you up. They normally install for free if you can pitch up with the vehicle.
And I expect it will be <R1500 all in

You could also try some of the online tools, eg:

Car battery finder from VARTA® - Find the best and most reliable battery for...

You're looking for the best battery for your car? Find here the right VARTA® battery with detailed product information.

From there you can often get a code, dimensions, or similar, and then search further until you find the “number” of the battery. Then just go to the local Midas and buy one.

On the other hand, quite often the local Midas knows what battery will fit…

Or just straight googling the number on the battery:

That yields a Bosch part number, which should make an excellent replacement battery at half the cost.

I did some desktop research. Found out that Mercedes Benz uses Varta for batteries.
I’m shopping around for the equivalent.

Will let you know the outcome. Thanks for the advice

Wow. Incredible. I know that the German brands rip you off when it comes to services, but charging for the installation of a battery, and putting such insane markup on a part you have no role in manufacturing… just spectacular.

The other brands are not necessarily better (in terms of markup on parts), but they do tend to break less often.

My wife drives a Suzuki. The trouble with the Suzuki is that many of the parts cannot be found at your local Midas, which means I have to support the dealer. But I found that the parts are generally not too way out. I mean a new door lock is R2k (and I’ve had to replace two already), but the German makes will nail you for at least twice that.

The parts that really hurt are the wear and tear items. For example, brake disks and pads. A full set for a Corolla, at the dealer, will set you back over 6k (less than half that if you buy after market). A set of wiper blades is R700. A cabin filter for the Suzuki… I think it was R500, which is ridiculous for a paper element filter… but I could not find that filter anywhere else.

Brakes, wipers, air cylinder thing for my boot etc for my Honda Civic is ridiculously expensive at Honda. Can’t believe they feel no shame in telling you the price. I just take my car for a service to them (long out of warranty, but I’m willing to pay to have it done by them) and to replace parts like that to a normal auto shop. At the very least it is half the price.

Most German brands usually stick with Varta as OE equipment. Good cost a little more than your next generic battery, but it’s well worth the money. Current Automation and MAL Batteries sell them.

I remember when my VW Jetta’s boot stopped opening. A guy fix it for me for R300 - could have done it myself. Turns out it is the cabling where the boot “swivels” – it bends a lot, consists of a bundle of solid core wires and it is right underneath the outer panels (so it gets hot).

Took it to the VW dealer and they said with a slight annoyance that they would have to do fault finding first at R1,000 an hour. This was 4 years ago.

Last time I took the car to a dealer.