Lithium cells bulging - what are the opinions?

What are the opinions on the bulging of Lifepo4 cells?

My cells were paid for on 17 March 2020. In Apr 2021 my cells went out of whack.
Thinking back, it was actually ±Jan 2021 when I found the box they were in was being distorted, but the penny never dropped.

Penny dropped when I saw two cells this weekend, on a 100% balanced bank for months, starting to “shoot out” ito voltages, thereby affecting the charging. Only saw that cause I had a BMV which gave a different SOC than the BMS, causing the power from the panels being immensely reduced. See here:

So I emailed the supplier asking:

I followed your instructions ito charging to the letter, never over 3.5v and 60amps on the 150ah cells, and now it seems I have a cell, possibly 2, that are slightly starting to bulge.

I vaguely recall 2/3 years … is there still a warranty on the cells?

Bulging is normal. Thats why all battery manufacturers clamp the cells together. The bulging is just because of gasses. It must be clamped together because the electrolyte lies in the buldge and this reduced capacity, performance and life.

Yes, I read a lot about bulging and the dangers if not carefully monitored.

If one has a BMS and one has never over-charged them and never at too high volts consistently, then bulging cells are a sign of a manufacturing defect

Methinks it is a dud cell, or two.

Re. clamping the cells together, the only reason that is required is to stop the cells from moving when in say a vehicle for example. Cells moving can cause internal stresses/damage when the busbars are put under stress. Can also cause the nuts to loosen. No other reason for binding them together, definitely not to keep them from not bulging.

More importantly, one must keep in mind that cells tightly bound together do not allow for excellent heat dissipation between the cells. I have 2nd Life cells on my desk in their original holders. There are spaces between the cells as the holders keep the batts firmly in place. That helps a lot with keeping all the cells cooler.

Bulging cells are a risk and the cause must be determined before a cell becomes a serious problem.

The above is from months of reading up about it all.

See, the idea of paying for lithium’s cells because of their claimed cycles is quite an important factor. I don’t see this bulging cell lasting the claimed cycles.

Is there still a warranty IF the cell/s gets worse?

Still waiting on the last question.

Clamp 'em. Do a capacity test. If the capacity is good and the cell does not get hotter than the others, she’s good. Or that is my thought at least.

Out come the threaded rods

, nuts, bolts and washers, and the left over boards from that last cupboard build…

This is a 2nd Life 12v battery bank in the original plastic casing: 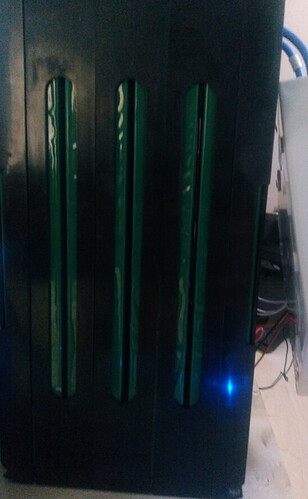 Having seen the inside of some “brand names”, the ones I’ve seen, the cells where securely held in place inside the box using special made brackets/holders, with space around the cells, and not the general DIY way of “clamping” the cells together with duct tape.

As I said, heat dissipation is rather NB around all battery cells, even lead-acid, to have air freely moved around individual cells.

Do a capacity test.

How does one do that with …

threaded rods, nuts, bolts and washers, and the left over boards from that last cupboard build…

Here are 2 of the 2nd Life cells that also expanded, and not in capacity.

Found them cause the casing was pulling apart when I was balancing the bank.

This I expected as they are 2nd hand 2nd life cells. 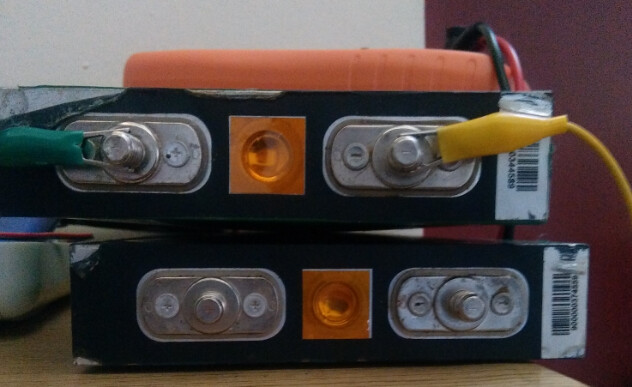 Saw a Will Prowse video a few days ago, where he received new cheap 100Ah cells that were also quite swollen. He tested them and they delivered the full 100Ah.

How does one do that with …

Well, you need equipment for that. People who build their own batteries sometimes have cell testing kit like that. But basically, you need to put some kind of 3.3V load on it and measure the Ah coming out (until it hits 2.8V) and then recharge it and again measure the Ah until it hits 3.5V or thereabouts.

I suppose you can also do that with the cell in circuit.

Saw a Will Prowse video a few days ago, where he received new cheap 100Ah cells that were also quite swollen. He tested them and they delivered the full 100Ah.

What did Will say, would the cell last the estimated cycles?

That there is the million dollar question …

Geez this is so seriously annoying … one cell that gets very excited and messes up the BMS SOC which in turn messes with the panel production like in panels can produce 3.9kw but only delivers like 200w when batts get “full” (sic).

Cell 3, the bulging one, now behaving after some TLC.

I can reset the BMS to get the SOC down again but dang, that is not a comfortable answer. This is what I get: 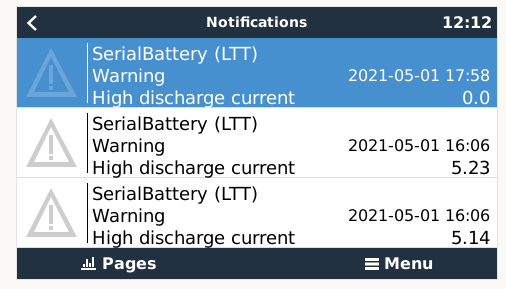 And BECAUSE Cell 4 now misbehaves, it also discharges too fast resulting in a substantial lesser ah drawn out of the bank, Low Voltage Warnings due to cell 4.

Thank snot I have a BMS that can show me the cells, that keeps a record of each cells voltages.

If only one could reset the SOC like one does on a BMV without “rebooting” it.

And thank you Victron for your proper BMV product!

Bugger this … sorting it the “Terrible” style … “The Bulb V2” 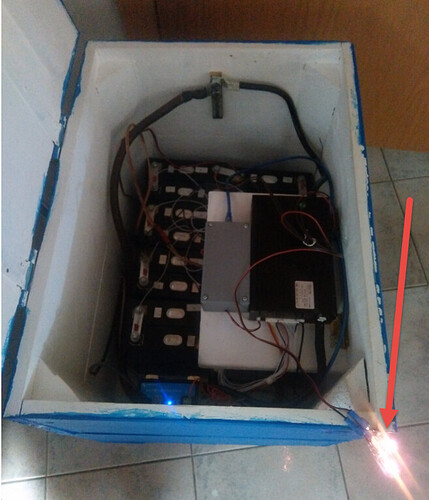 Ps. That wheeled battery box is not finished yet … the wife has a sense of humor and will finish it shortly.
Me, I was like on the floor laughing of what she is going to do …

EDIT: For all the males … if your wife discovers Tjhoko paint and a FB group on what people paint … o my, do NOT sit too long in one spot … she WILL paint you too.

Reminds me of flying back from Cape Town a few months ago with my wife, and I had to carry the 42 succulents she lovingly packed into a large carry on bag. Luckily they were all taken out of their pots, so not that heavy.

I was just glad we flew down to visit my son and did not drive down, or the succulent botanical gardens in Worcester would have been emptied into the car.

if your wife discovers Tjhoko paint

Mine has…
She has already done a few tables and chairs, and she has big game in mind : The whole kitchen and bathroom.

At least it’s your favourite colour

On purpose … but just wait … she has gone beyond!

And in-case anyone want to go :Blue", here you go: 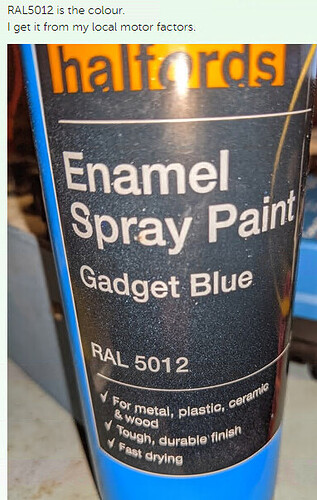 Right, I think I know what happened.

Took a entire day to get here: 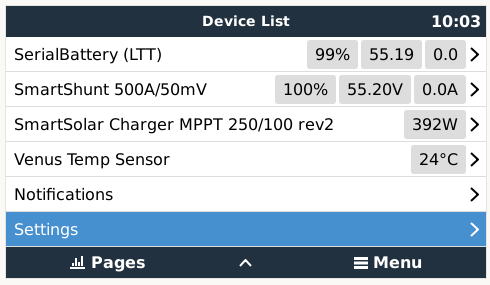 Now a drain to 80%, chargeback to 100%, over and over till the 2 cells behave again, one being more “excitable” than the other, and watch the bulging one till I can get it properly tested. The supplier has gone quiet.

So what happened:
My system is programmed to run on schedules right, I know what comes and by what time.

Then the schedules changed last week with family here.

At times there was an oven, a convection oven, 2 x induction plates, 2 x kettles, 2 x air fryers, and a 3kw geyser on, as some will be showering using the kitchen geyser, with LOTS of dishes.

One time I looked and saw Eskom was like 11 000w with solar adding another like 3500w mainly from batteries(!!!) totaling ±14 500w as it was still before 11am so the batts were still crawling up in SOC.

I close my app and made some coffee.

Yeah, cooking breakfast for 8 people is tough on Eskom and solar.

Added to that we had some weather.

So the system worked its arse off last week resulting in the imbalance of 2 cells which in turn gave a higher BMS SOC (100%) than what was, the BMV SOC hovering around 30-40% with the BMV SOC driving the system.

The system got confused.
BMS says I’m fully charged (due to cell’s shooting out), cells being at like 30% or less, resulting in BMS doing a BMS thing resulting in lower production.
But BMV says hey, hold my beer, I’ve got a couple of % points SOC, there, use it … clusterfuck.

Lesson learned here: If family comes to visit for a week, switch off ALL automation, just set to Keep Charged, OR higher min SOC, and basta trying to save a few cents on the rand.

But … it was REALLY good to see them all!

ditch the BMV and just use the BMS. Then you will have just one source of the truth instead of 2 sources.

Here’s the thing about the BMS … the red blocks … 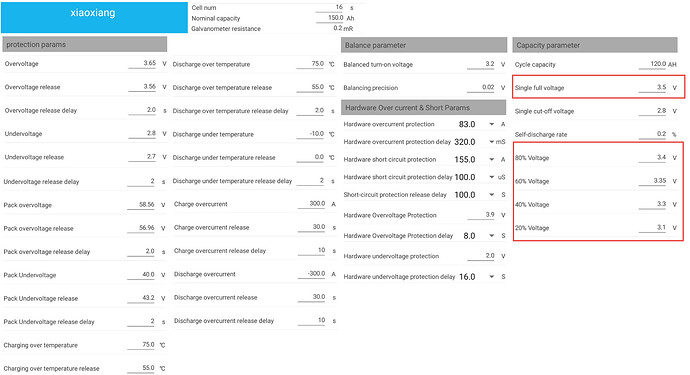 I’ve been using the BMS SOC for the last 24h … the moment that one, or two, cells hits 3.5v the SOC jumps to 100% even though the coulombs that the BMV measured going into the bank has not even reached above say i.e. 30% SOC.

I don’t know how the BMS calculates the SOC from the shunt, as it has one in, or where it applies, but that setting causes havoc with the SOC when a cell goes out of wack.