Just to introduce myself, I am Bruce and I live in Plumstead. I have recently bought a MLT/BI-6000 6kva inverter to replace my Mecer 1200va inverter single 100ah deep cycle lead acid battery that I have powering my office. (Which, I might add, is really struggling to keep up with all the loadshedding

Here are some pics of my new acquisition:

I found this site thanks to @Gman who I messaged after finding pics online of his awesome solar setup with MLT inverters. Through Gerlach I have also been introduced to @Stanley who has also been giving me advice on suitable batteries that I could buy. Thanks to both of you for the help you have given me - I really appreciate it.

I have decided that I definitely want to buy Lithium batteries, and at this point in time I am considering buying one of these two batteries:

I do intend installing solar panels, but that is second phase (and when the budget allows!

) … first phase is just getting a suitable battery purchased and getting the Mecer replaced.

be careful, when the mecer and deep cyle find out they are being replaced they might just leave an acid stain on the carpet!

Welkom to the MLT club. Now we 3 people on the forum with mlt inverters.

I think you will need to add at least another 5 kw battery for the 6kva inverter. Have you checked the MLT battery requirements?

Thanks, Gerlach. Glad that I found the MLT club.

I can’t wait to get my inverter up and running …

Unfortunately that is right out of my budget at the moment. My budget for a Lithium battery is around R25 000 … I could maybe push it to R30 000, but that is the absolute limit at the moment. 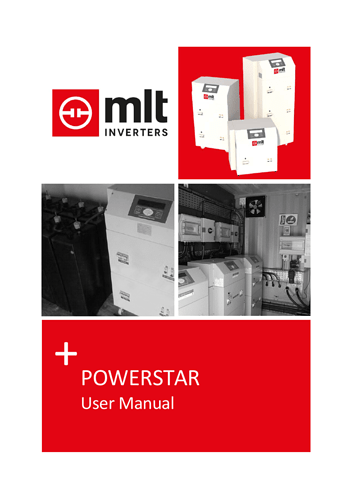 This manual, though, seems to be for MLT inverters in general and not for my model specifically. So I am needing some help in finding viable battery options for my MLT inverter.

I have decided that I definitely want to buy Lithium batteries, and at this point in time I am considering buying one of these two batteries:

@Stanley Can you inverters communicate with BSL bull, also a 10 year 4000 cycle warranty at a fraction lower than the E-Tower price.

I think you will need to add at least another 5 kw battery for the 6kva inverter.

I agree, in the long run, if OP wants to use this inverter at full capacity, he would need more than one 5/6 kwh 1C battery. With an inverter this size i would stay clear of a .5C battery especially on a limited budget. He can get quite far with a 5 or 6kw brick, but not all the way up to full capacity.

I’m told the BSL and the e-Tower has the same BMS, though of course that doesn’t necessarily mean they run the exact same firmware. Most CAN-bms batteries all speak the same protocol save for one small difference: The frame that carries the alarm information. Pylontech and LG sends that on 0x359, while almost everyone else sends it on 0x35A. These days I think Pylontech sends both, at least in a Victron system.

Many cheaper batteries from the east (here I am not talking about any of the mainstream local options, I mean really cheap) copy the older Pylontech format, and similarly, many cheaper inverters from those parts are designed to work with those cheaper batteries, and therefore look for alarm information on that frame.

A small number of batteries invert the battery current (I’ve only seen one, Tesvolt). Other than that, if you’re battery supports the de-facto CANbus standard that SMA came up with a decade ago… you should be good.

manual, quik setup and spec sheet from the direct source MLT Inverters → by the looks of it your model will fall under the legacy G2 category. 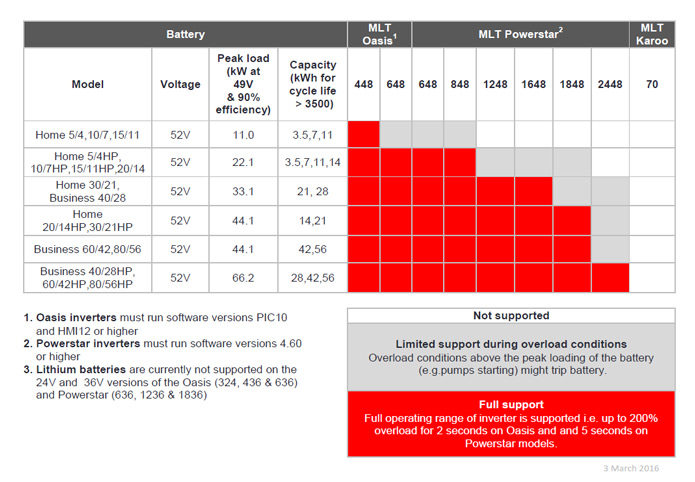 It definitely is 48v - the person that I bought it from told me it is. He was running it with 4 12v Gel Batteries.

Correct @JacoDeJongh . Like I explained to him on the “other” forum where he posted first. He needs to get something with a higher C rating and higher voltage and he needs to stay clear of Pylons, or he will need a bunch of them to keep the inverter happy. This inverter can pull a lot of amps.

I started out with 7.2kwh and lasted a night just just op die hond se gat. About 4 months later I added another 7.2kwh. Inverter was happy with 14kwh and for the application and size of house.

I see they updated their web site and some stuff was removed. Guess it’s to move the guys over to the new units.

On the FreedomWon unit, the bigger ones, I spotted that they running a small communication unit between the inverter and battery. Stanley can give us more info around it.

Running without coms between the battery and powerstar isn’t a train smash. I’m running mine like this and did some tests right in the beginning to see what the inverter will do if you charge from the grid. You can adjust the inverter how much amps it must charge. It will start dropping to float when it hits the pre volt settings it needs to be.

Some of the units had a lithium setting in it, spotted on my friend one we installed. Think it was a 2017 model. Mine is a bit older so don’t have that settings.

Running without coms between the battery and powerstar isn’t a train smash. I’m running mine like this and did some tests rite in the beginning to see what the inverter will if you charge it from the grid. You can adjust the inverter how much amps it must charge. It will start dropping to float when it hits the pre volt settings it needs to be

looks like the “Lithium” battery option is from a particular firmware version (>4.6), and there is also an older doc for bluenova batterries that specify cell level voltages etc. to set with a lead acid setting only firmare version 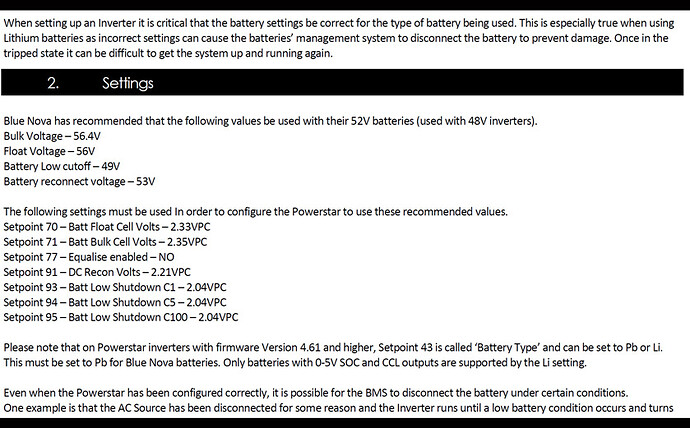 as specifications change continually - whomever sees the above table - PLEASE confirm with your battery supplier before using.

From a battery perspective proper comms might be useful if getting to the stage of having multiple packs connected - especially with the newer batteries of whatever brand this could also have implications for warranty exclusions (so, @BruceHill keep in mind if buying batteries new at R20k+).

Depending on overall path foreseen starting with 0.5C batteries could be an option. If only connecting the office (that was so far running on a 1kW 12V system), and adding more batteries later to build up to full inverter capacity it could work? If wanting to jump right into 5kW loads, then 0.5C will be a problem. Obviously there are again possible warranty issues when undersizing batteries to inverter size but this might be mitigated (NOT avoided) if you are very confident the inverter will never see those kind of loads.

i would stay clear of a .5C battery

The two batteries that I listed were recommended to me by @Stanley in a private message. He said that the 5/4 is the better of the two options because the BMS on it is better.

The BSL and the freedom one is 1C, pylon and Dyness for example is 0.5C. I should have been clear in my first post.

You will see it on the battery’s data sheet.

Depending on overall path foreseen starting with 0.5C batteries could be an option. If only connecting the office (that was so far running on a 1kW 12V system), and adding more batteries later to build up to full inverter capacity it could work?

The Mecer is currently wired up to red plugs in the office and the bedrooms, and the load is very limited - just 2 PC monitors, modem, POE switch that powers three security cameras and 2 Unifi wifi access points. I used to have the alarm system plugged in too in the bedroom, but have just replaced the battery in it, so it now has its own 8ah gel battery.

So, yes, initially I can keep the same setup, and not have it connected to the DB board at this stage. At a later stage when the budget allows I could add a second battery.

My priority now is choosing a battery that works well with MLT inverters.

how can I tell if a battery is a .5C battery?

The C rating, or more specifically the recommended rating, is how fast the manufacturer wants you to charge or discharge the battery. 1C means the battery is charged/discharged in one hour, and 0.5C means it is done over two hours. A typical lead acid battery would likely have a recommended C rating of 0.1C or C/10, that is, they want to be charged and discharged over a ten hour period.

This affects the maximum current you can draw continuously. So a BSL of FreedomWon battery is typically rated at 1C, so if it is a 100Ah battery (or 5kWh), that means you can put a 5kW load on it, continuously (until the battery runs out) and you won’t lose your warranty.

As Jaco said, Dyness and Pylontech are 0.5C batteries. There is nothing wrong with that, since very few people would actually want to kill a battery within an hour, especially since load-shedding is typically two.

It does mean that when you design the system, and you have an inverter that has the capacity to charge/discharge the battery outside the recommended amounts, it would be better to look at a battery with a better C-rating, or more battery modules in order to get the margins right.

Also note that the C-rating is a recommendation. Pylontech batteries can do more than that, they can do 2C… but for short periods only, not continuously. And of course, if you do exceed this rating frequently, and you do need to do a warranty claim, that might affect your chances of success. The batteries often have an internal log, and they will tell mommy if you hurt them

at the risk of derailing, and not taking aim at you (@plonkster) , I think the spec sheet 1C vs 2C vs 0.5C thing is actually the monitor equivalent of HD, HD ready etc. - a marketing term handy to throw around and abuse. Many of the 1C batteries actually have 120Ah cells but the 1C rate on the spec sheet is 100A and the duration of sustained load/charge also differs.

Some standardisation will be nice and I think on forums like this it might help if people actually start using indications like the sustained amp rating of charge/discharge rather than generic “C”.