Registered on here a while ago but just been too busy to get around to doing my first post.

Anyway, I wanted to purchase an inverter system for my house about a year ago but I just found that literally every company I contacted in the Cape would either setup appointments and never pitch or couldn’t be bothered to come out and would only email a quote which was typically hugely inflated in price because of the demand at the time so I eventually decided that I was going to buy the stuff and just do the install myself.

I was put into contact with @JacoDeJongh as lockdown hit, sent him my usage and sort of requirements and promptly received a really competitive quote for all of the gear I needed, obviously lockdown posed a problem for delivery but we managed to get the gear delivered and I set out installing the system over the next week or so, I did pretty much 98% of the work myself with the odd Whatsapp or phone call to Jaco who was super helpful and got a sparky out in June to connect it all up but as it turns out he wasn’t too sparky and the wiring wasn’t done correctly so I was not benefitting from the inverter unless mains failed. Jaco had a planned install road trip in the Cape so told me to hang 10 until he came down here and he’d check it out for me which he did and the rest I guess is history.

My system comprises of:

Some pics below of the install 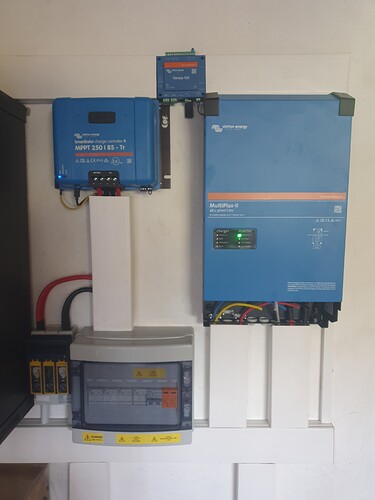 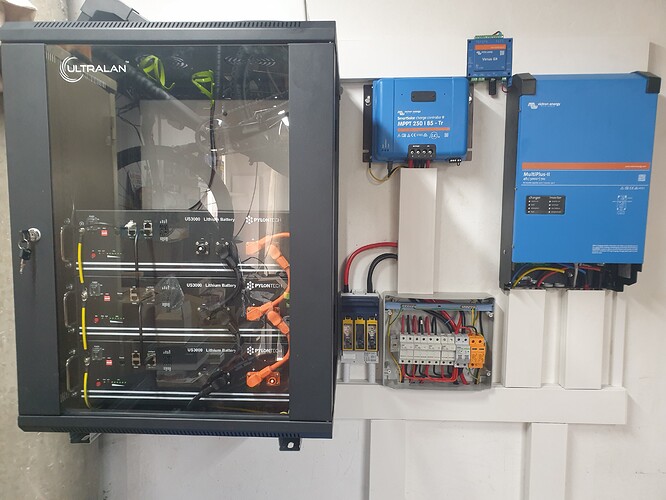 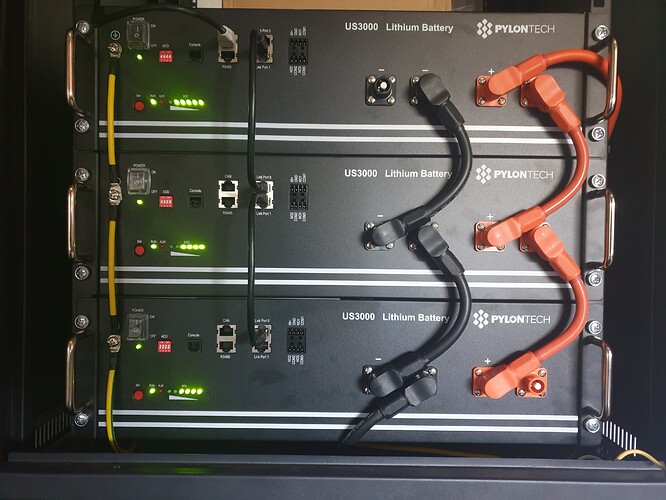 The only changes I’ve made to the system is that I’ve added a nodemcu with a relay and two temperature sensors that monitor temperature of the inverter and MPPT and then control a small DC fan in the trunking above the inverter to pull the hot air out, I have added 3 AC fans and use the relay on the Venus to switch these on at certain temperatures to cool the MPPT, batteries and inverter. I actually didn’t realize that a. how hot these things get particularly the MPPT and b. how much of an effect this has on the performance of the system, the temperature probe above the heat sink without cooling would get close to 60 degrees and now with the cooling it maxes out at 48 degrees, its made a huge difference.

Oh, I have also put both my geysers onto timers I built with Sonoff’s and external AC relays, this had a huge impact on my usage because I can now ensure that both geysers dont come on at the same time resulting in my drawing this power from Eskom and also making sure they’re not coming on in the middle of the night but rather during the day and only when I have plenty of juice, I have several automations that kick in based on SOC etc… to top up geysers, run pool pump for longer etc…

The relays have saved me around 5kwh per day.

My average daily consumption is typically 25kwh to 45kwh, on a good day less than 2kwh of this comes from Eskom but on average I draw about 70% from inverter and 30% from Eskom. 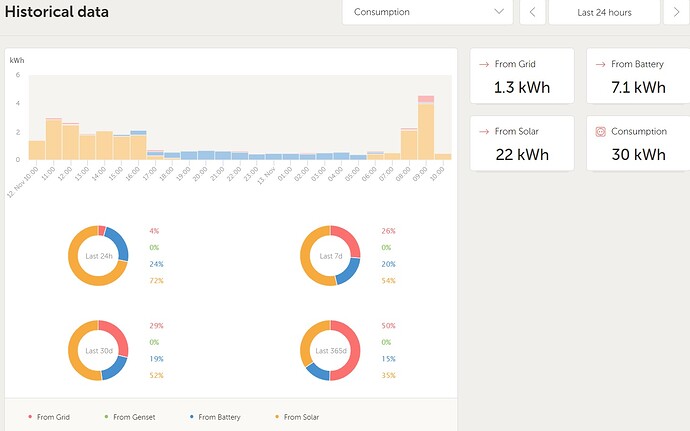 As I become more familiar with my usage patterns I tweak my automations but am pretty happy with where the system is at currently.

The Nodemcu is an interesting option. You will have to give us much more details on that. Is it stand alone just on temperature, or did you integrate that with something else?
How are the Sonoff switched managed. Also stand alone, or integrated?

The Nodemcu is an interesting option. You will have to give us much more details on that. Is it stand alone just on temperature, or did you integrate that with something else?
How are the Sonoff switched managed. Also stand alone, or integrated?

Hey @Louisvdw not sure I understand what you mean by integrated or standalone?

Looks extremely professional. Very nice setup you have and I like the automated heat control you built in.

Thanks Deon, the heat control is definitely worth the effort.

I have been thinking of building something similar, as my Goodwe inverter only has passive cooling via the heatsink at the back, but I have not yet had any noticeable throttling issues due to heat.

I was quite lucky in being able to site my inverter right next to an outside window that I could leave open, which definitely helped a lot with possible heat issues, but I also picked up nice set of 220v server case fans and have lots of sheet metal available, so might bend up an extractor hood for the inverter. (Time willing, due to too many projects and a shortage of time …

Its exactly what I’m using they’re potent and do a pretty good job. I was originally going to have individual automations for the various fans but the heat of the batteries, MPPT and inverter track quite similarly so I just bring them all on at the same time. 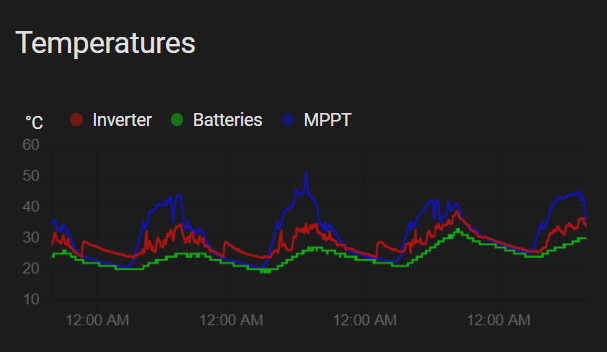 what you mean by integrated

Integrated into a central controlling system like Home Assistant or Node Red, etc.

Ah ok got you now. They’re all integrated into my Home Assistant, I don’t use Nodered, played around with it a tiny bit but it didn’t appeal to me.

I monitor the temperature of the sensors and when the MPPT gets to 33 the automation switches on the relay on the venus, it goes off again at 27.

The geysers are also controlled through HA, I don’t do any temperature monitoring it was a hack for me to do this and not really necessary, at certain SOC levels I run top up’s on the geysers and the load drops before the automation switches off which indicates that the geysers have reached the max temp of the thermostat.

The added benefit of adding geyser control in HA is that you can switch off the automations if you’re on vacation and then reenable them say a day before you come back and of course you can do this remotely.

I’ve also been thinking of fans on my goodwe, but it hasn’t derated or thrown out an alarm due to heat since it’s been installed. Hottest I’ve ever seen it was 63deg and that was on a hot day as well. Today is hot’ish as well, max temp was just under 62deg