In my quest for battery longevity, I am finding that the temperature that the batteries operate has a substantial bearing on their lifespan.
I think this is generally accepted.
But what is the ideal temperature?
There has been more research on Li-ion batteries than Lithium Iron phosphate. Too low is not good and too high is not good. I have read accounts that say 15 deg C, 20 deg C and 25 deg C being the ideal.
The higher side of those temperatures being better operational and the lower side being better in terms of less degradation. I can’t find definitive research for LiFePo4 batteries that states exactly a specific temperature.
This brings me on to my next practical thought. It would nigh on impossible to keep an active battery bank at a specific temperature. The act of charging and discharging will create heat.
I think it is fair to say that the ambient temperature during the night will be lower than the day though, so there should be some sort of daily temperature swing.

Well is that good enough, I don’t know. It may be perfectly acceptable if you have a set-up that naturally swings between 15 and 25 degrees daily.
Although, when I tracked my lead-acid bank, (admittedly it was in a fresh air environment), it could swing between about 3 and 43 over the year, with a 30-degree daily swing probably being the norm.
I think trying to prevent that swing in an open environment would not have been cost-effective.
Now considering LiFePo4 batteries, I am more comfortable with having those in a closed environment, because of the absence of outgassing. So perhaps temperature control is an option now?
It is easy enough to do electrically. Turn on a cooler when they are too hot, turn on a heater when they are too cold. But that doesn’t float my boat, using electrical power to store energy.

This is where I think “PCM” has a role. “PCM” stands for “phase change materials”.
So what are they when they are at home?
Perhaps an example we all know, water. Water can exist as a solid and a liquid at its melting point (0 deg C). To heat a litre of liquid water 1 deg C takes 4.18kJ/kg.
However, to turn a litre of water at 0 deg C into a litre of ice at 0 deg C takes 333.6 kJ/kg.
In practical terms that means the same amount of energy has been transferred to change the phase of water from liquid to ice as would be needed to heat 1 litre of water from 0 deg C to 80 deg C.
This is also a well-known phenomenon, it is called latent heat and the temperature of the medium does not actually change.

Ok, fair enough, where does this fit in? Well, it means that if I put a 5-litre bottle of water in my freezer. It would slow my freezer down as it tried to reach a temperature lower than 0 degrees. And if I had a power cut that bottle would slow that freezer from rising above 0 degrees. This thermal inertia is disproportionate to its physical mass. It would be a thermal battery.

Ok fine, but I don’t want to keep my Lithium battery bank at 0 degrees. I want to keep it at somewhere between 15 and 25 degrees. Well, PCM’s come in all sorts of signature temperatures. Pick one that freezes/melts at 18 degrees C. The thermal inertia of the PCM would be reluctant to allow the battery enclosure to drop below 18 degrees and likewise, it would be reluctant to allow it to rise above 18 degrees.

In effect a passive heater/cooler ( no moving parts) that would be powered by the natural daily temperature swings.

PS. I can also see applications for this for hot water storage for extended periods.

I’ve been a bit obsessed with trying to keep my batteries’ temp at least below 30 degrees. I recall seeing a figure of 25 degrees somewhere, possibly just on the marketing materials of the batteries and the temps at which their testing have been done.

In the summer, I’ve kept my garage door’s (batteries is in the garage, South facing and technically underground) top bit (roller door) open (day and night) and during the day, when they were charging, I ran a fan on them. Helped with at least 2 degrees (not very scientifically tested, only my feeling from observations). In the summer, I didn’t really see temps exceeding 32 degrees. The rise in temps were much more dependent on the charging cycle than on ambient in my case.

I consistently saw the batteries rise in temp rather sharply from about 85% to 100% SoC. Now this might also just be because they reach those SoCs at about 12:00 and they rate of charging ramped up the most. This was in summer. Now in the coldest fall I can remember, I still see them rise, but I really don’t need to extend any effort (no doors or fans) to keep them below 25 degrees.

So because my loads on the batteries are minimal (<300W compared to charging of >3kW often) I really just need to help them stay cool while charging and know that they will cool down at night.

I like your idea of PCMs to be used maybe in a cavity around the battery. Well basically anything to help absorb the heat my batteries generate while charging.

I know about phase-change cooling being used in PCs (or I guess in our human bodies by sweating), so surely it should be doable. Guess the question is whether the effort will have a worthwhile effect on battery life/degradation.

Throwing my 2 cents in the pot.

As temp is VERY important … when you bind the cells together it also assists in the bank getting “hotter” generally versus some space between each cell for better cell ventilation.

I am just suggesting that there might be a better filling than air in that cell sandwich.

A video that explains the principles in terms of cooling beer. 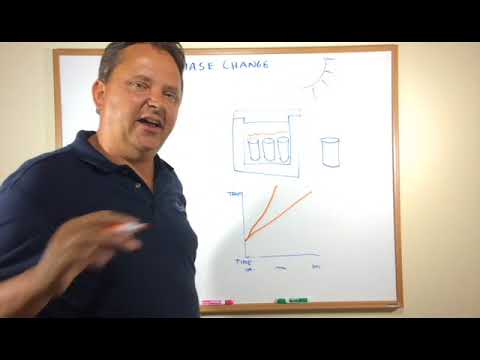 And just when you think you’ve thought of something new. Some more info, I think this stuff has massive potential: Throwing my 2 cents in the pot.

As temp is VERY important … when you bind the cells together it also assists in the bank getting “hotter” generally versus some space between each cell for better cell ventilation.

I was proposing the cell sandwich had a different filling. We were both wrong.
It does more harm than good. It is better to have no gap or cooling on the broad face of a cell.
Due the construction of the cell being made out or pouches in parallel. Cooling the broad side of a cell results in the outside pouches being cooler than the inside ones. This means the inside pouches work harder, so the pouches age at a different rate. The overall cell life declines.
Cooling should be done at the bottom, top and narrow sides of a cell, and not done on the broad side. This means that each pouch is subject to equal cooling and therefore each pouch works equally hard and the overall cell last longer.
Not very intuitive I know, but it does make sense.
The principles are discussed here: We were both wrong.

Naaa, I was not “that” wrong, even though what you have discovered is “next level” …

Me, this clamping thing of cells making them last “longer” makes not enough sense.

BUT!!! If the cells are in a vehicle, moveable, now THAT makes a lot of sense to clamp them cause cell poles may move a fraction, repeatedly, thereby damaging that cell internally. Stationary + clamping, I’m asking why?

Did you watch the vid?

EDIT: We are stuck, for now, on the cells we’ve got ito cell cooling.

This is such a lovely journey, no one really knows, you can challenge everything. I love it. This is the space I feel the most comfortable in. Ten years from now this will all be in an instruction booklet.
In the meantime, we get to play.