Home Assistant and camera's, which ones work best?

@gbyleveldt , I see you are using cameras on HA. My future next project. 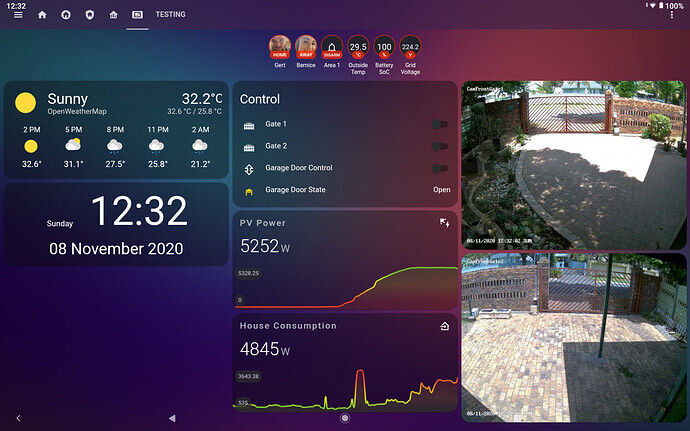 Are you happy with them?
Evening’s, as good looking image?
Make and model?

Motion sensing and HA, is that also possible?

I have Hikvision cameras and I am generally happy with them. Stable and complete local control.
All of them hooked up via LAN cables (Wifi cameras a less reliable / lower image quality in my opinion).

I record locally to them on SD Cards, and I also feed their live feeds through this: https://github.com/blakeblackshear/frigate

This allows me to look for people (and other objects, such as cars in front of my gate) and react accordingly in Home Assistant. Reactions include sending a snapshot to my phone, turning on outside lights and triggering an alarm (all through HA).

In my setup, I use the Generic camera implementation and feed my Hikvision RTSP feeds into it. This means the 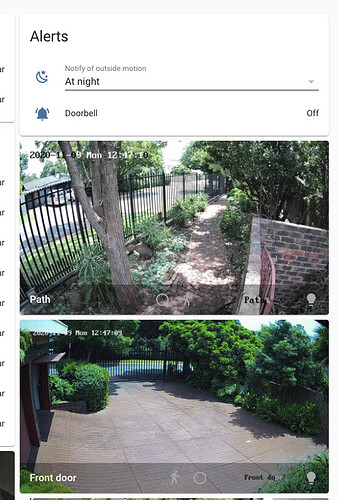 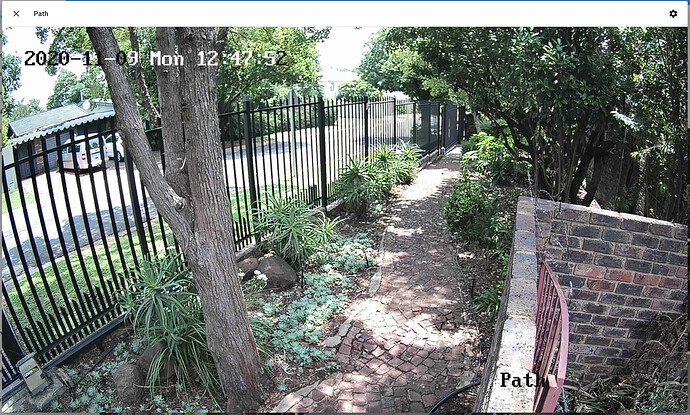 Even then they occasionally cut out and show a gray image. 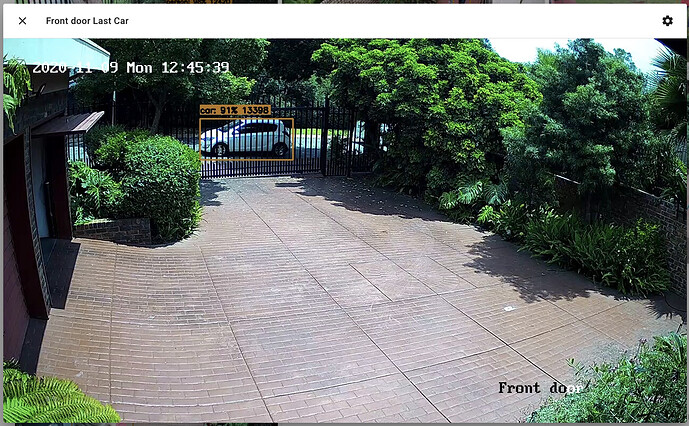 I’m using Reolink RLC410 cameras. Imported direct from Reolink; I believe they running a special now at $45’ish each - I’m running 8 of those and two older Vivoteks giving me 10 cameras in total.

For $45 they are brilliant. They are definitely not perfect; day time performance is really good, so is static night time performance. The downside is that they change the exposure settings to give nice night time images, at the cost of framerate. In other words, if there’s a lot of movement at night the images can be blurry at times. I don’t really have a good example but it’s not been a serious issue for me to be honest.

The HikVision and Dahua starlight cameras are better, but they cost considerably more. Pick your poison. All this being said, I’m happy with the Reolinks especially as I’ve got LED lamps around my property in any case so I don’t have the exposure problems that others have complained about.

Night time image of camera with decent additional lighting. Notice some blurryness to little Trixie as she’s moving about 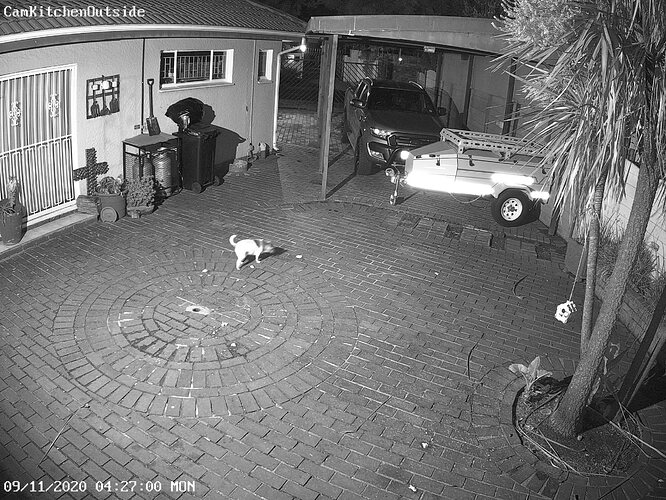 Night time image where there’s no real decent lighting, except for small LED globes on the wall. 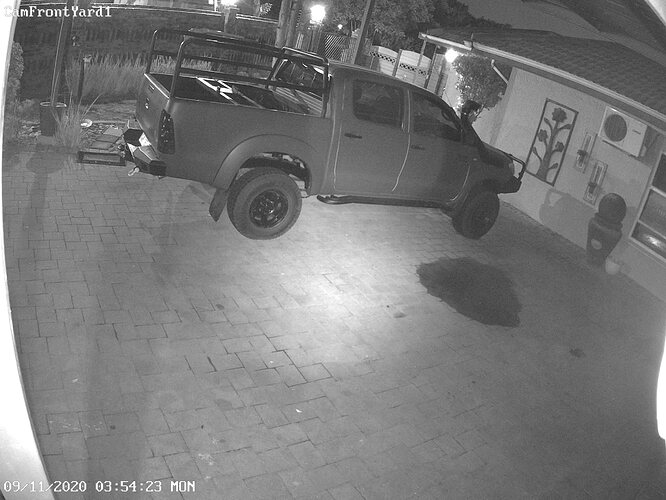 They do have pretty powerful IR lights built in, so much so that they shine a bright spot on the pavement where ambient lighting isn’t really present.

So yeah, I think they are good for what you pay for them and thus represent incredible value. Whether they will suit your needs vs something that costs 4 times more is debatable.

I didn’t integrate these directly into HA. I’m running Blue Iris on a windows server to record all the cameras. Blue Iris does talk to HA, so in my case I’m just pulling the images off Blue Iris and displaying them as streams in HA. That makes my camera choice HA agnostic. As long as Blue Iris can record them, HA will display them. And I can decide if I want to stream the main stream @5MP 15fps, or the substream at 640x480 30fps. In my HA dashboards I’m streaming substreams and those are realtime @ 30fps. Doing it this way the cameras are rock solid - I’ve not had a single issue with cameras dropping in HA at all. And because Blue Iris supports almost everything out there, it makes my life easier as far as HA is concerned.

The cameras support motion sensing, but it’s really not great. Too many false positives - but I knew that up front and that’s another reason I went for Blue Iris, which supports better Motion Detection and allows for 3rd party AI to do object and person detection. In fact, that’s one of the last outstanding items on the list I need to finish; integrating DeepStack AI with Blue Iris. There’s a massive thread about it on IPCamtalk and many people have gone this route. I’m just lazy

Sho, that was a mouthful…

I’ve got a very similar setup to @gbyleveldt
Same cameras (6 of them)
Also running Blue Iris.
I have done the DeepStack integration, it works most of the time, but does need tuning from camera to camera.

What’s nice is that you can do cool stuff like “If the alarm is on, and the system detects motion, send me an alert to my phone, including a picture of what the camera is seeing”
Really convenient, and provided great piece of mind when I was away last week.

That’s EXACTLY what I want to do.

Which version of the integration did you use? The one from gentle pumpkin? I see there’s 3 approaches out there. I don’t know why there’s 3 of them and what the trade off is…

I largely followed the guidelines from The Hookup (https://www.youtube.com/watch?v=fwoonl5JKgo).
I had a bit of trouble getting Portainer to work, so ended up installing the DeepStack container manually.
I use the AITool from Gentle Pumpkin, and the “noavx” version of DeepStack.

After that, it’s just tweaking the cameras:

I’ve got it to the point where, if I walk out my front door, after sunset, my patio lights will turn on for 2 minutes (or as long as the system detects me there)

@gbyleveldt and @ebendl - those pictures you guys posted … 10 times better than my old system.

Right, will get back here after I got the Victron stuff integrated, but the options are there, and it can be integrated. Cool!

FWIW: The current system just does not cut it anymore, one I bought years ago from Wireless Alert. See, I want to know LONG before anyone gets close to a window/door, that someone is on the propery.

And when they do peek into a window!:

ok ok ok … have some fun they said … was a nice thought though.

I fully agree of knowing there’s someone in the property long before they break down the front door. In my case, when the home alarm is armed, there’s literally no reason for a person to be on my premises. The main reason for me wanting AI is because dogs/cats still seem to trigger normal beams and outdoor passives. Person/vehicle detection is my main requirement. I don’t really need to identify someone visually, I only need to detect their presence. That’s why the slight blurriness of the Reolinks at night doesn’t bug me much. It’s not like we can give video evidence to SAPS so they can prosecute a case.

I prefer to steer well clear of any and all officials simply because I have no need to explain myself to anyone in SA today on why I shot someone or shot at someone.

However, if intimidation and “voodoo” does not work to make them run, and they do get into the house, armed … a higher level game plan is required.

Yeah good point. It’s just that lately we all feel a little disillusioned with a civil approach to potential conflict. Anyway, let me not derail this thread further

Being at home when someone comes is one thing. The earlier the warning the better.

Being away you can do interesting things. I have a couple of connected speaker systems and lights in Home Assistant. I’ve thought about triggering every speaker system, at full volume, with different tracks, combined with flashing every light a different color when I detect an intruder. I figure the sound of an alarm siren is pretty much easy to ignore these days, but something like this is bound to grab attention or at least freak out the guys a bit…

Yeah with a mixture of dubstep, Celine Dion and some Italian opera thrown into the mixture.

You, sir, are a fountain of inspiration

HIkvision cameras at night. There is some light from the streetlight coming in but they do a pretty good job without it too. 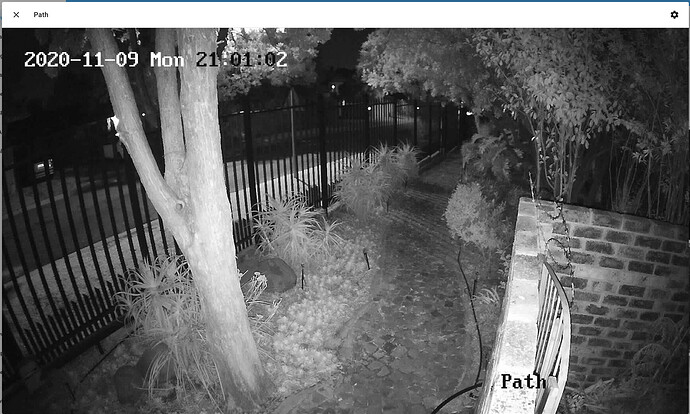 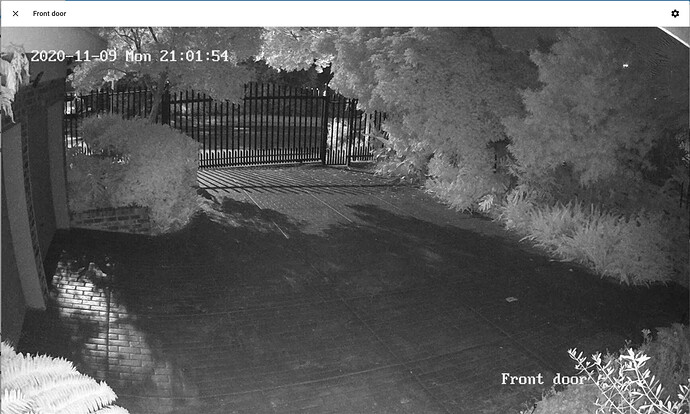 Nice … this is what I want… maar nie nou … eers “môôôôôôôre”.

I just could NOT resist … dubstep is ok, but tell them a story when you blast them … just edit the softer parts out … 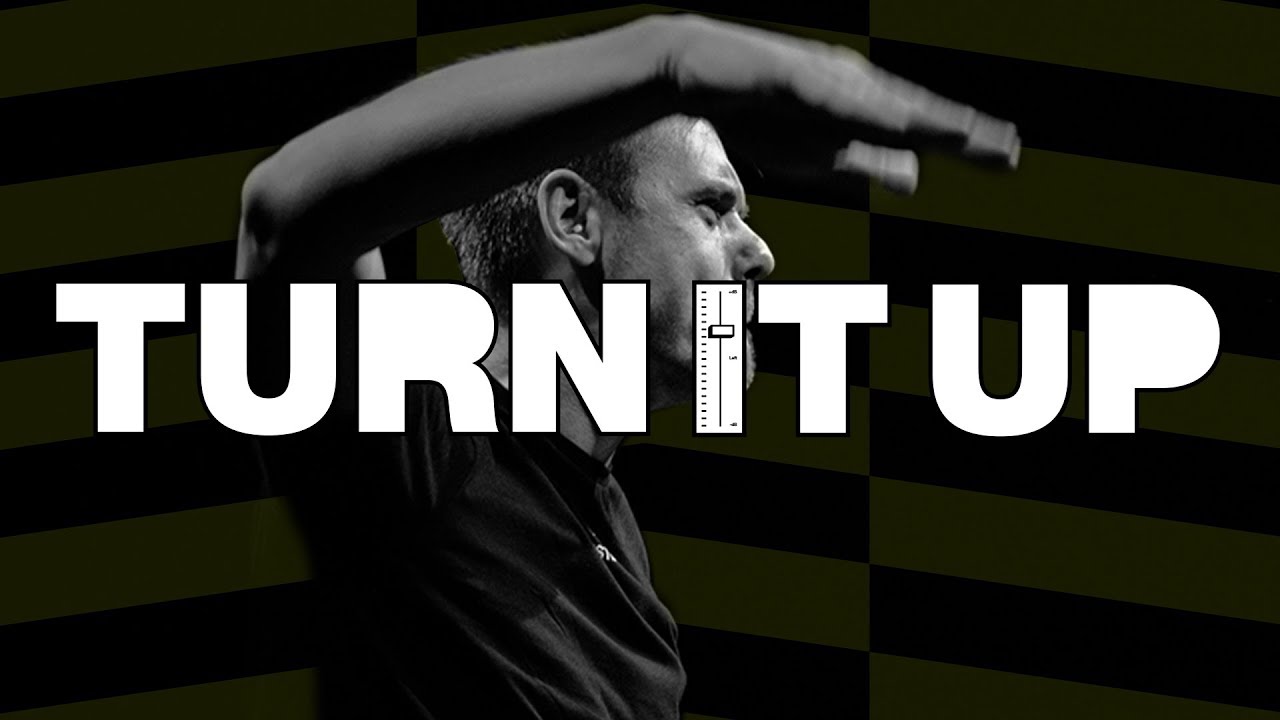 And then, when the cops arrive … entertain them a bit later … 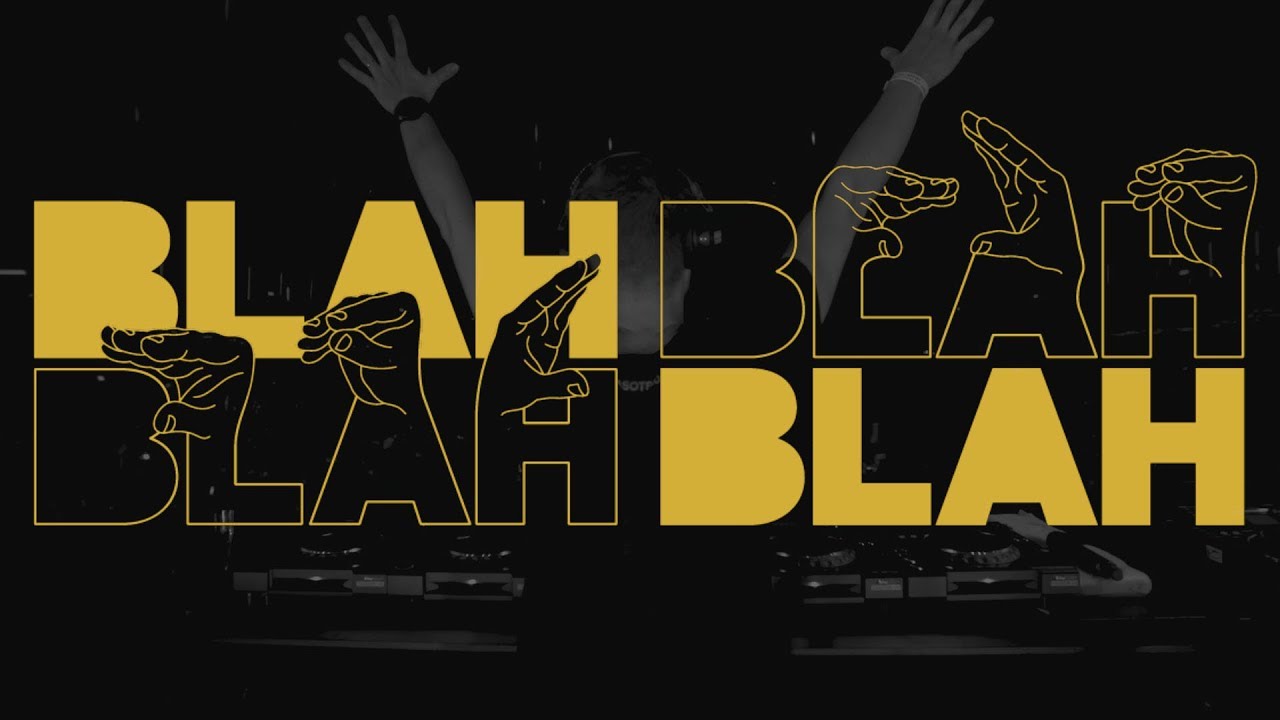 Although I’m not sure how they will hear the story above the death metal playing from the room next door.

But yeah - “when the neighbors complain turn it up some more” is what I’m aiming for. The scary angry witch-like lady staying next to me pitching up is, quite frankly, more dangerous and scary than the police or armed response…

I have a Dahau DVR that came with the house. It supports RTSP for each camera (cameras are connected via some kind of serial link, I have no idea how it works, I still have to find out). You can view them remotely on any app that supports that (eg VLC). I can get the 10-second snapshot to work in Home Assistant, but not the live view. Also, the IP camera app on my Roku refuses to work with them, and in the latest Android update of VLC it stopped working as well.

In general, I’d say don’t go with a Dahau if you want it to work well, but admittedly I have little experience with any of the alternatives

Just for fun here is my 5c. I have all sorts brands of cameras around the house. 17 Including a ptz camera.
Most of them is of cheap Chinese origin ( Those dvr kits) and some Ip cameras. So quality is all over the place. I have had them on recording for 24/7 but eventually gave up on the recording.
So my set up looks as follow.
All the cameras is setup in Node red so that I can capture a single frame on command. Some through http get ( If they allow for it) else I am using ffmpeg to capture the frame.
The reason is that if I am away I only need to send one command to the system and will get the odd 24 pictures ( The ptz will take a couple) on Telegram. If there is something roaming around I should see it.
Then they are all hooked up to my security system. So if it is armed and get triggered the cameras will take one picture of that zone and send via telegram. That way I can see what triggered the Zone.
It just did not work for me to log into the system (that took at least 40 seconds) then first look at the cameras see nothing then go to recording then … by then halve the morning was gone. …
This is what the setup page looks like 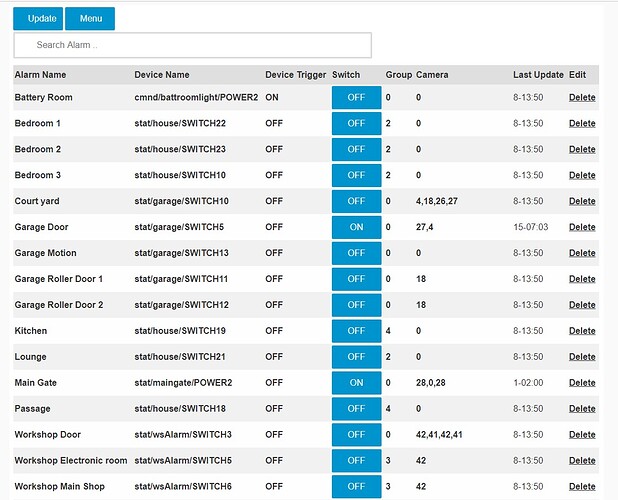 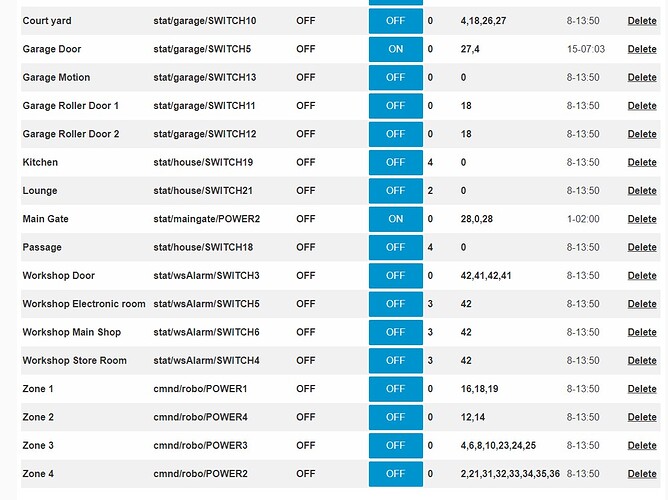 The Camera Numbers relates to the cameras so you only need to add the camera number if you wat a picture to be taken in that zone. (No cameras inside the house

)
The Device name is the trigger topic from MQTT So you can also link a trigger to more than one zone if you wanted.
This also has the advantage that I have linked my lights to the zones so if the main gate opens at night all the outside lights will go on and so on.
As always more than one way to peel a banana