The past two weeks I have noticed strange behavior with my MP2. It stays in Inverter mode longer and doesn’t change back to Mains when minimum SOC or Scheduled charging is reached. Well I must admit it took me that long to figure out the problem. After updating the MP2 and ESS firmware the problem still persisted. Just when I thought that I had finally managed to break the inverter, I decided to put it on VictronConnect and the first thing that pops up is High L1 alarm. “Will stay in Inverter mode” (or some-such message) . I checked the voltage for the past two weeks and it has a min. of 243V and a max. of 265.

Reading up on the subject, it says I can disable LOM, but they do not advise it. @JacoDeJongh and @plonkster can you please give me some advice. Is there a device that I can install? cos I know that when I report it to the municipality it will probably take a year to repair it and of course the first weekly power outage after that will result in the same problem.

I don’t think it is that. 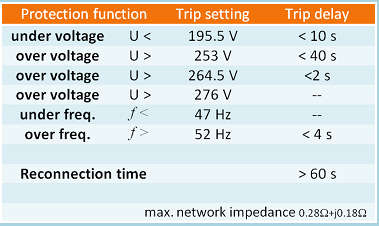 It cannot reconnect until the voltage drops below 253V.

What you can do is change the grid code to something else. Eg “other”. Then you can set the voltage range that is acceptable. Though of course… is that really what you want to do? If you are running at high voltages, the supplier probably needs to fix it. Usually by changing a tap on the transformer.

(To change the grid code, you will need a password though. Usually you have to get that from your reseller, or, you know… ask someone who knows

the supplier probably needs to fix it. Usually by changing a tap on the transformer.

It’s unusual for the mains supply voltage to change as you have described.
Have they been working on the grid in your area? The substation transformer won’t be that far from you and this is where the tap adjustment is made.
Log a call!

Thanks for the feedback. I will change it temporarily to “other” and log a call to municipality.

@Richard_Mackay , The power outages in our area are numerous and they are forever working on the grid supply. What with cable theft, antiquated transformers catching fire…etc.

And probably the rest of the infrastructure too.

In my house (built in 1975) the voltage sags all the way to 212V some evenings. Some of my own load is to blame for that, but even when my own load is low it is in the low 220s in the evening, which means it is also low at street level.

Right now though, it’s spot-on 230V and around 00:45 last night it exceeded 235V. So I have a voltage swing (at street level) of easily between 220V and 235V. That’s more than half of the allowed 10%. And that is in a relatively well-maintained city.

I can imagine that if a tap on the transformer was already changed in an attempt to get it up, then later in the evening it could well cause the voltage to go out of bounds on the higher end. In that case, your only solution is going to be to change the grid code to “Other” and set your own.

But please keep LOM set to at least type-B.

Reminds me of that case I have in East London.

Setup is running off-grid until the Munic can sort the supply, as the voltage swing is quite impressive being at the end of a very long feed from the transformer in the street.

This is an informative article on the topic. Though I thought the taps are on the secondary side. It’s a field I don’t know enough about yet

I spoke to my electrical foreman today to see if they can come and set the taps, but he reckons they wont be able to as the power supply to the transformer has to be switched off first.
So , I will have to wait for municipality to come sort it out.

I suggest you shouldn’t expect much this week due to the mutiny.
Try again on Monday