I am looking at the GX Tank 140 to monitor my tank water level and start my borehole pump through my Cerbo.
The problem is the distance between the tank (on the hill), the Venus device ( at the house halfway down the hill) and the pump (at the bottom of the hill).

Thinking out loud:
I am toying with the idea of a pressure sensor in the pipe that will be proportional to the tank level.
Maybe that solves one issue of the distance between the tank and the Cerbo.

The output relay of the Cerbo could operate a solenoid valve (on the pump side of the house), which in turn would cut out the pump via a pressure switch at the pump.

Or is there some Cerbo relay output to Zigbee contactor available these days?

The distance to the pump isn’t the issue here, only the tank to Cerbo.
What is this distance?

The distance to the pump isn’t the issue here

I only will have power at the pump not “switched power” from the house and I don’t want to run control cabling, so switching will have to be wireless of a sort. It isn’t a pressure pump though it is a borehole pump. I have never seen those pressure vessel switches on a borehole pump before, I don’t know if it will work.

The distance to the tank is 60 to 70m with line of sight. The GX Tank 140 has a USB output.
I don’t see the need to overcome this distance though as the pressure in the pipe will be proportionate to the head of water. The pipe that passes the house will feed in and out of the bottom of the open tank.

I don’t see the need to overcome this distance though as the pressure in the pipe will be proportionate to the head of water. The pipe that passes the house will feed in and out of the bottom of the open tank.

I don’t think the tank is more than 20m above the house.
So only 2 bar.
The GX Tank 140 apparently has the ability to be set for the shape of the vessel.
So hopefully the pipe’s small volume relative to the tank can be factored in. 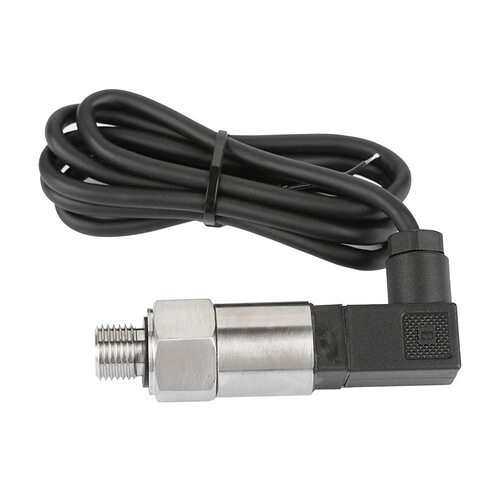 I would attempt the following. First install a pressure gauge to any water pipe in the house and monitor the pressure differential between full and empty, if that is over 1 bar, I would use a 3 way pressure switch that they normally use on compressors. Something like This to start the pump at low level and stop it at high level.

A more accurate method might be to use a sensor like this this with a smalles scale/range connected to an arduino that can handel the On/Off using an output relay.

Thanks Jaco.
This is in essence what I am trying to do, but I want to avoid the start and stop control cabling to the pump.
My initial thinking was to control the open and close of a solenoid valve at the house based on a local pressure sensor which will signal full and empty tanks.
When the tank is full the solenoid valve closes.
The pump will now be pumping against a closed head so the pressure will build up on the pump side of the closed solenoid.
A second pressure sensor local to the pump will then turn it off.

But I’ve spent a bit of time today reading about wirelessly linked PLC’s and I think they can introduce a lot more additional functionality. (Irrigation control through soil sensors and suchlike).
So it may be back to the drawing board and I’ll just use VRM as a visual indication of the tank levels.

Edit: In essence I think it is better to extract the data I want from the Venus combine it with more sensors and digital inputs and control many more outputs from a PLC, than try and make the Venus do something it isn’t really designed for.

This is in essence what I am trying to do, but I want to avoid the start and stop control cabling to the pump

I was thinking of switching the power to the pump.

This is what I use. Works like a charm, but you need to get the correct ball valve that will stop when the tank is full and also allow enough flow for the pump.
Normally the pump has an water exit and this controller fits perfectly into that slot and you use it’s exit as the exit. Then it is just wireing the power and you are off.
I can recommend the Eduan float valve Installing water tank - #9 by Louisvdw

I don’t think it actually needs to be “on the pump itself”. When the ball valve closes on your top tank it will cut power to the bottom tank pump

HI Mark, this is interesting, what happens when the ball valve closes.

Normally the pump has an water exit

I would plumb the water OUT of the pump direct to the pipeline > then to water IN of the controller > then water OUT on controller to pipe to the top tank. Just moving controller to close to the house for Sonoff to control.

This ball valves you can buy from any arrogation suppliers. Other option is this:
https://media.takealot.com/covers_images/003ee3eef8414752a1b4be44f141bcfc/s-pdpxl.file

Do you use a mono pump or a multistage pump?

Very low power needed and if used just to move water then flow rate not a huge issue.

Thanks all, some worthy ideas here.
The ball valve idea will work, but then I’d need a pipe to the top of the tank to feed in and a pipe to the bottom of the tank to feed the house.
I have one 2" pipe that runs from the pump past the the house ( where it T’s into the house) and up to the tank.
Pipe cost is not the issue, the trenching issues are after much concrete work was done.

you need to get the correct ball valve

This part is sort-of important. A lot of valves restrict the flow towards the end, but they don’t close immediately. This causes the pressure to rise and the pump to stop, but because the valve is still allowing some flow, the pump restarts again within some seconds. It goes on and off a number of times before the diapragm pressure and the closing-force of the valve evens out and the flow stops.

You also need a valve that allows enough flow, so that the pump operates on the right spot on the head/flow spectrum.

On this topic, I actually had such a pump feeding two toilets directly. And that is what happened. The pump would shut off before the cistern was completely full, then restart and stop two more times. Since two was acceptable to me, I didn’t bother to change it. But if it was more severe, I would have fitted one of those big bladder tanks.

That explains why you can use that method, if you restrict the flow, the pressure will rise till the point something gives… A multi stage pump on the other hand reacts totally different when the ball valve closes and the pressure will not rise enough to switch a pressure switch.

You also need a valve that allows enough flow, so that the pump operates on the right spot on the head/flow spectrum

Yes originally I had a normal cheapy bal valve that I got at the local hardware store fitted, but it limited the overall flow and the pump had to run for 6x longer to fill the tank. With the correct valve it now takes the same amount of time as without any valve, so I save 5x the power.