I’ve been toying recently with the idea of a borehole, but have read/heard many horror stories over the years about people spending a fortune to drill and ending up with nothing.

In terms of this I was wondering if anyone here had success/failiure stories and/or ideas of resources that can be consulted to get at least some kind of an idea whether a site/area is likely to be suitable or not?

The best indication of success is if your neighbor has a borehole. Otherwise a geologist that specializes in the topic would be your best bet.

Yes, ask around your neighborhood to see if anyone has a borehole or well point.
I recall you’re in Gordons Bay. I live on the other side of False Bay in Glencairn. We had a borehole sunk for R30k (no guarantee of water but they drill until the money runs out…)
The net result is a limited supply of brackish water good enough to water the garden. So it’s turned out ok what with CoCT water tariffs penalising one for using municipal water other than for domestic use.
PS: I’m now also thinking of storing rain water since this is relatively easy to do.

In terms of this I was wondering if anyone here had success/failiure stories and/or ideas of resources that can be consulted to get at least some kind of an idea whether a site/area is likely to be suitable or not?

I’ve found that some drillers are quite forthcoming with sharing the results of their past drilling experiences in the neighbourhood. It can’t hurt to ask.

As to your fear of coming up with nothing: Define “nothing”? Even solid granite “sweats” a little bit if under enough pressure. A farmer might not bother to put a pump in a hole that yields 100 litres/hour, but if you’re just after irrigating your garden you can install a storage tank and make it work.

I found this a very entertaining video on the topic: 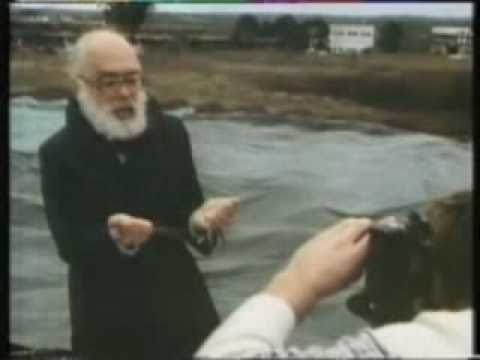 If you need a dowser, PM me for my rates.

I’ve seen various dowsers hit water 5 times out of 5 on 5 boreholes. No geologists were involved.

I draw two conflicting conclusions from these experiences:

Exactly. Watch the video for the final conclusion.

As to your fear of coming up with nothing: Define “nothing”? Even solid granite “sweats” a little bit if under enough pressure. A farmer might not bother to put a pump in a hole that yields 100 litres/hour, but if you’re just after irrigating your garden you can install a storage tank and make it work.

Yeah, I guess after drilling it needs to produce at least enough to stand a chance of returning some or all of its investment cost (over a really long period of time), e.g. meet full needs of irrigating garden topping off pool etc. Otherwise theres no point in throwing in more money to put in the equipment.
Theres a value to not having the garden die, so even not complete ROI is okay but theres definitely a quantity below which its a waste…

This is a good question though and one I should think about a bit more, whats the bare minimum I’m anticipating needing from it…

Another thing to consider - at some point(depth) the energy required to pump the water becomes more expensive than municipal water. Off, course if there is no municipal water available, that tends to infinite.

Unless you’re extremely lucky and your borehole water has very low dissolved solids, I would forget about that. I tried it, and the cost of the chemicals I had to buy to treat the water exceeded the cost of just using municipal water.

Although it does increase the likelihood, it’s no guarantee. Neighbor from my next complex has a borehole. The neighbor next door tried to drill probably less than 20m away from the first borehole and couldn’t find water.

Everyone else around him found lots of dust everywhere though.

Best bet as already said is to speak to neighbours up and down your street, see where they drilled and also find out who showed them the spot. Whether professionals or a old school guy with 2 pieces of fence wire or a mikstok, your chances are much better if the person knows the area, have worked in the area for a long time.

At my house for example I know pretty much exactly where I’ll have to drill to get water, the neighbours on both sides of us have boreholes and another 2 or 3 people up the street, on a map you can draw a straight line threw all of them.

If I ever have to do a borehole, it pretty much would have to be in my driveway. I don’t think you’d be able to get the drilling machine in anywhere else…

The last borehole my father had drilled on the farm, he had a “waterwyser” come over. This man walked without the proverbial divining rod. He looked at the lay of the land, the rock formations sticking out here and there, how the trees were growing. Then he looked into the distance where you could see the heads of existing windmills sticking out. Then he said… there should be water here, and he pointed to a spot.

Then he walked back to his vehicle, and got the stick. He walked around a bit more, and eventually pointed out a sport a few meters from there. “It would be easier to drill it here”, he said.

Take this as you want, it’s certainly not proof of anything.
The old guy who dowsed a borehole for me had no nearby holes to reference.
He said I had loads of water in many places, but he had selected a place where two underground aquifers crossed one another perpendicularly.
He said he didn’t know which one was above the other.
We drilled to 80 + meeters and hit an aquifer. I was asked if I wanted to continue drilling until we hit the next aquifer.
There was already enough water for me, so I decided to stop drilling. But it is good practice to drill a sump 10m through the aquifer that you hit. So I did.
Just about as I was about to stop we hit a second aquifer, this time it was really big water. So I drilled a second 10m sump through it ending up with a 101m hole.

Crystal clear, 37000l/h ( conservative estimate), it rose up to 12m below the surface, and my pump cannot draw it down below 15m from the surface.

Oh, and strangely enough the water is 22C.
Anyway, my point is this time the dowser didn’t just predict water, he predicted it twice from 1 hole and he was right.

I know a waterwyser oom just outside Pretoria, he has been showing water in the area for just over 40 years and before that his father did. He has a logbook with pages of pointed out boreholes which his father started back in the day and which he continued with, so he can take you to each and every of the holes he pointed out.

One of the drilling guys told me he has been drilling in the area for 15 years, 90% of holes he drills “is oom Lucas se gate” and the success rate is 100% for the guys willing to go deeper than 100m. For the last 10 to 20 years oom Lucas advises everyone to go over 100m, but many don’t follow his advice and end up with dust.

Now going back to the video posted earlier, it could be that in that area, there is pretty much water everywhere as long as you are willing to go deep enough.

I think the real trick would be to find shallow water. That saves you money. That takes skill. The man who tells me “drill here, and before 40 meters you’ll find water” is worth way more, because you pay by the meter for drilling.

I mean, not that I am dismissing oom Lucas, just thinking out loud

The USA has learned that too much pumping of groundwater, as they did and do, causes substantial subsidence.

Why folks in cities in SA want to sink boreholes, I do not understand.

Yes, land subsidence is responsible for you getting a little dizzy when you look at the first picture in the banner above, the one of a line of buildings. The land these buildings sit on has fallen and compacted because large amounts of groundwater... 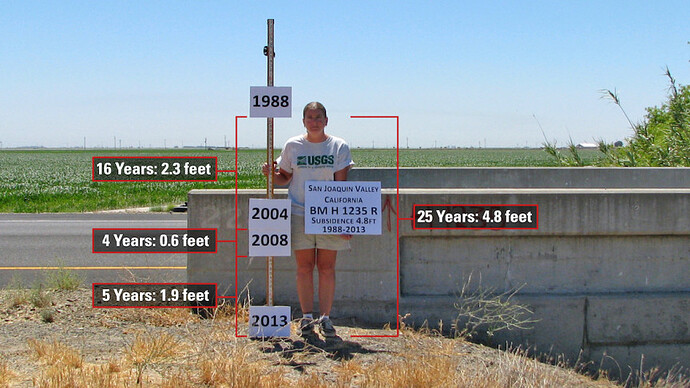 How Over-Pumping of Underground Aquifers Can Cause Land to Sink

Not paying attention to how much groundwater you pump out of an aquifer can cause disastrous consequences for local geography.

I think the real trick would be to find shallow water. That saves you money. That takes skill. The man who tells me “drill here, and before 40 meters you’ll find water” is worth way more, because you pay by the meter for drilling.

Actually, my understanding is you want to find deep water because noo-noos live in shallow water.

I think you are right, but it probably also depends on the area. Where I grew up you typically struck water at 50 meters (ish) and once you do, because it was semi-artesian, it would push upwards and you’d be able to extract it with 30-40 meter of piping. And that water was clean as can be.