Herewith an article on RE in Germany:
Walking into the grid control room at 50Hertz, a Berlin-based utility, on the morning of May 13th felt like walking onto the bridge of a spaceship: screens full of data, an air of competent calm and the underlying sense of an immense flow of power being guided on its journey. This hyper-secure site (and its mirror in another location) are charged with controlling the flow of electricity to 18m people in eastern and northern Germany.

Today the screens show 28% of that flow coming from wind farms and 24% from solar panels. A decade ago the custodians of the grids which keep the rich world’s lights on would have told you this was impossible. Renewables were too troublesome, too hard to balance with demand moment by moment, too prone to fluctuations in the frequency of the current they provided. In 2011 a symposium of electricity mavens convened by mit concluded that “Too much electricity generation from intermittent renewables is as much of a problem as too little generation.”

This scepticism was understandable. Dirk Biermann, who is in charge of system operations at 50Hertz, points out that grid operators “are very conservative when it comes to system operations because, at any price, we have to make sure that the electricity supply is maintained.” Nevertheless it was misplaced. The grid 50Hertz oversees is quite capable of running a transmission grid with 50-60% wind and solar power.

And the progress is not over. The company aims to be able to handle a 100% wind-and-solar grid by 2032. Mr Biermann sees that target as demanding—“We have to speed up”—and anticipates “moments of tension” on the way. But he thinks it will be done. Some places, after all, are already doing it, if only for fairly short periods. Neighbouring Denmark has at times run its entire power grid on wind power alone. At 3.39pm on April 3rd over 97% of California’s power came from just wind and solar. A decade of technical, managerial and systems-engineering progress has put the design and management of grids dominated by renewables within the sober, risk-averse grasp of people who run electric grids. What was once touted as a fundamental barrier to the transition from fossil fuels has been done away with.

The ability to use renewables for the lion’s share of a grid’s supply, coupled with the fact that renewables have been made cheap and are getting yet cheaper, is the basis of a decarbonisation strategy all but universally accepted by those determined to stabilise the climate. Make the power on electric grids emissions-free, cheap and copious. Start electrifying all processes that now require fossil fuels—such as powering cars, or heating homes and steel foundries—where electrification is clearly possible. It does not deliver everything that is needed. But it delivers a lot.

They may have bit of a problem now:

Germany has literally some of the most expensive power in the world, in the region of R6/kWh

Germany has literally some of the most expensive power in the world, in the region of R6/kWh

Ironically enough also dirtier than neighboring France in Co2/kWh.
That is what happens when you switch off clean and cheap nuclear.

grid operators “are very conservative when it comes to system operations because, at any price, we have to make sure that the electricity supply is maintained.”

This quote sums up the situation we find ourselves in. They see taking on any risk as unnecessary and to be outlawed. This is understandable since they aren’t going to be congratulated for going out on a limb embracing a dynamic grid…

Grid operators or Controllers if you like, are there to do only one thing really, keep the frequency pegged to the standard (50 or 60Hz). They do so by balancing predicted demand and generation. All they really do is either call for more generation, or less, at time x. If no more generation is available to satisfy predicted demand, they have to lower demand, by dropping it, ie. Blackout parts of the grid to maintain the frequency within tolerance.

They are always preferring dispatchable generation, ie base load like gas, coal , hydro or nuclear. Less desirable, from their point, ie keeping the grid from collapsing (a good thing but slow in uptake of alternatives) are battery backed Wind and Solar. Last on their list are less dispachable (well only dispachable when the Sun shines and the wind blows) non battery backed Wind and Solar.

Conservative, maybe, pragmatic yes. True is that they have reliable sources of generation in Germany, apart from their gas supply now being limited. Coal and nuclear was terminated for mostly political reasons buy that is a whole different subject as to all the reasons.

We on the other hand have only a small percentage of reliable sources. Do tell what are the unreliable sources, well the staff and management and the ideology. And to some extent, Germany suffers from some of those same ills. Now they have to revert to the systems that were killed off, to be able to survive. Maybe one day, in the distant future, after

, we will return to properly operating and maintaining our plant again, or build new plant efficiently.

And further on the Nord stream 1 pipe, it was closed for about 10 days or so of maintenance, and it supplies about 40% of German gas. There is a fear that it may be permanently off, or delayed maintenance for a long time. 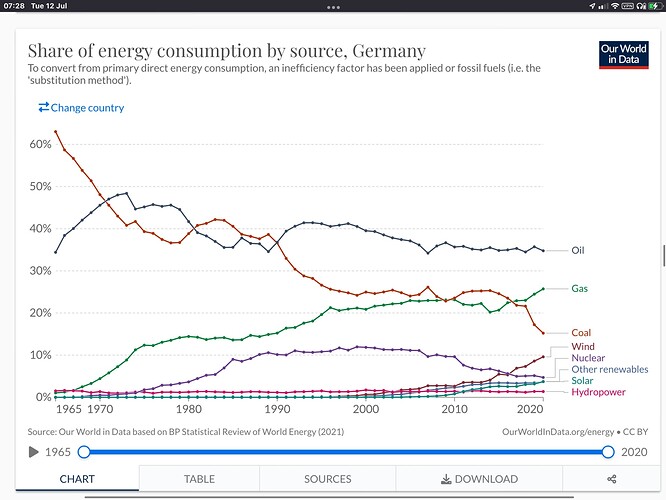 That is also why PV plants, even in a sunny country like South Africa, are considered to be about half their peak size. Due to the influence of weather, you need a healthy margin, and only about half can be considered “dispatchable” even on a sunny October day in the Northern Cape.

Of course that brings up another point about PV, that is actually is fairly dispatchable in the German summers. Much more so than wind.

PV, that is actually is fairly dispatchable in the German summers. Much more so than wind.

I may be wrong with the statement “much more so than wind”. If you take a similar approach with wind (you only bargain on a fraction of the peak value), and you have nice constant wind speeds (eg West Coast), then I suppose wind can also be highly dispatchable. It is just that in my mind, a clear sunny day is much easier to forecast than a constant wind speed, but since I am not a meteorologist, I should perhaps not be too confident about that.

PV is fairly dispatchable, in the sense that if you know there is no cloud cover (and we know, well ahead of time), then you know that at least half of the peak power is always there… you can count on it. It is reliable, and it is available immediately. Aka dispatchable. Wind is always going to be more variable, at least in my mind…

Thinking of just solar or just wind is kinda discounting 80% of its utility. We would not think of a gas or coal fired plant without it’s generator or transformer, it kind of defeats the object of the exercise. Yes I know it’s a kak analogy, but hey it’s also 04;00 in the morning, so there.

Point is, Lithium batteries. As I have pointed out in another thread, Wind and Solar plant now always included storage. That changed the dispatch-ability of these renewables completely. Enough kW and kWh and these can last between 4h and as long as we like, currently cost efficiency indicated about 8-12 hours.

Both solar and wind plus storage are cheaper to build and run than just coal fired plant operations and fuel in most parts of the World already.

In solar thermal plants they use large salt storage tanks to store heat energy. The 100MW plant I was at could apparently run for up to 8h after sunset off the stored energy.

Apparently PV has fallen in price so much that CSP is no longer viable. With some sites (in the US) not even operating anymore because it is not profitable. On top of that it also seems that they have all failed to reach projected production.

With some of the new perovskite silicon tandem solar cells reaching over 30% efficiency in the lab, I see solar rapidly gaining a still larger market share of any renewable mix.

It just makes so much economical sense and all this available solar energy will need storage, which is also why the world is scrambling to secure all available lithium mining rights. EV batteries and solar storage - expect enormous growth in the next few years.

That is also why PV plants, even in a sunny country like South Africa, are considered to be about half their peak size. Due to the influence of weather, you need a healthy margin, and only about half can be considered “dispatchable” even on a sunny October day in the Northern Cape.

This is possible at a household level, because power needs are linear to area (mostly - and even for double story houses, the human using power is just on one at a time), but surely the sheer area needed for PV if this strategy is to be followed for all, will be prohibitive? Households use relatively little power per m2. Office buildings etc. are built (and utilised) in three dimensions, so you almost need another dimension to solve your power problem. PV seems to be limited to two dimensions.

I think you are missing my point. My point is if I ( or the utility or whoever) can make solar power and I/they can only rely on 50% of the PV generation, then I/they should make it twice the size.

Not everyone has the option to generate their own power, I accept that. The problem is that at present there isn’t enough power available to buy from the utility.

I think I get your point, I just raised an issue with building double the amount of PV you need (because the generation factor is only 50%), as the land you need to have available would also double.

This the point I reckon: You need to “bank” the energy so it’s “dispatchable”.
These new words that they dream up are somewhat confusing I find.
So hydro storage is old school and now it’s hydrogen…