ESS Showing AC Loads (before inverter) when it should be 0W

I finally got my blue piece installed, but I am seeing what I am assuming is not the correct behaviour. I already let my installer know and they’re looking into it, but I thought I’d add it here even if in the end I just add what was done to resolve it.

What is happening is that when I have load only on the Critical Loads side (AC-Out-1) there is also load showing on the AC Loads side between the grid meter and the inverter when in fact this should be 0W with the breakers of those loads switched off and the changover flipped to put them on the critical side.

The below is taken with ‘normal’ loads and the heat pump running:

An overlay of the Critical Loads and AC Loads overnight while the baby’s heater was switching on every now and then (but there’s also load picked up even when it’s not on): 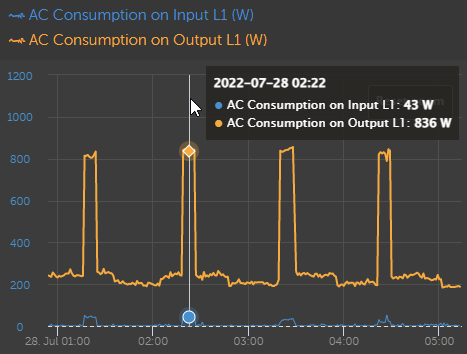 If I change ESS to “Optimized (with BatteryLife)” and a 20W Grid Setpoint (95% SOC just to use some battery) then I can see it jumping around quite a bit on the grid (possibly due to this ghost load) and also feeding in more than what I’ve seen on other installs. I’m not sure what will then happen when PV is added in a couple of weeks’ time and how it will react while charging the battery, providing loads and catering for these ghost loads:

Something that might be worth mentioning is that while the batteries are charging from the grid using the inverter’s charger there seems to be a lot of electrical ‘noise’. The display on the oven was freaking out until the charging stopped after which it’s gone back to normal.

Mine does the same, think its 1) the inverter using some power and 2) its a calculated value from DC and AC sources. I vote completely normal just a little flutter.

Might also be a time delay between the meter and what use that value. If I remember @plonkster mentioned the ET112 has a 650ms or 750ms refresh between values.

The figure shown as AC-loads is the difference between what the Multi reports, and what the grid meter reports. If there is a discrepancy (and there will always be, the calibration is never exact) between these readings, the difference will show up.

Additionally, the readings are taken X-amount of time apart, where the grid meter typically gives a new value once a second, but the Multi can sometimes be delayed by as much as 3 seconds, that is at any point in time the value from the Multi might be 3 seconds older than the one from the grid meter, so two out of the three estimates is going to be wrong. Normally this is not a problem, you just need to put down the magnifying glass

Edit: Also, the times when it shows zero… it is very likely the real value was actually negative. There is a clamp built in to prevent displaying impossible negative values.

Normally this is not a problem, you just need to put down the magnifying glass

Agree with this statement…there are no absolutes here

This makes perfect sense, thank you. I assumed it was due to update intervals and calculations, but with the swings quite high at times I wasn’t sure.

Funnily enough I had to explain to colleague yesterday how 200 nodes that are polled at 1 minute intervals (PT1M) doesn’t mean all 200 will update in the same minute at times and will explain slight differences when looking at it over 1 minute, but looking over 3minutes+ intervals will show the correct data. Not exactly the same, but still.

Thinking about it further these discrepancies / swings will be less when running in self-consumption due to the fact that there’s less coming from the grid when using battery / PV, so a smaller difference between the grid meter and inverter’s output and will be OK then.

Just for interest’s sake I thought about a meter on the output to try and make it more accurate, but like @plonkster mentioned here “it is only logged to VRM, not displayed on any of the overviews.” and also in the Cerbo’s manual that is only used for monitoring and not for calculations:

Please not that such metered loads are not used in any calculations, just monitoring.

@plonkster, any chance you can have that typo fixed in the 2nd word?

you just need to put down the magnifying glass

Pfffft. If you can honestly tell me that you never had a new toy and didn’t use the magnifying glass (or scope in your case) then I will put it down

Hehe, it’s a bit of an internal phrase in the company. I actually agree with you here, I saw some swings that were higher than I’m used to. My own setup does something very similar at night, fluctuating quite a bit. In my case, I see zero watts for short periods, while I really would not expect that (way too many small loads on the non-essential side).

What it could also be, is the meter. I’ve observed, on the ET112, that sometimes when there is a load change, the meter delivers this one wrong value in the middle of the pullback. I know it is a wrong value, because it is one single negative value in a sea of positive ones, of a magnitude that makes no sense. I know the meter also has a filter algorithm inside, so my guess is that it has something to do with that.

I also know it is the meter and not the software, because I wrote quick and dirty NEW software to directly query the meter as fast as possible to see if I was really crazy…

These meters are good quality and does the job, but they are not precision instruments, that is for sure.

What it could also be, is the meter.

These meters are good quality and does the job, but they are not precision instruments, that is for sure.

I think I’ll keep an eye on it once the PV goes in and self consumption is used. If the swings are too big and confuses the Multi I guess I’ll have to up the grid setpoint to cater for it or move it to AC-Out-2. We kept the meter in instead of adding a 2nd AC cable from the DB to the inverter (~10m) and seems like a bit of a hassle just for the oven.

Meh. I know I need to let it go and drop the magnifying glass, but it’s still bugging me that there’s so much AC Loads being calculated when nothing’s turned on. I understand 1 out of 3 values from the meter might be wrong, but would that be the case even if the load difference is so small that it ends up constantly calculating the ~300W?

I know when the PV comes it’ll look a lot different (better) as this gets worse the more load is coming from the grid, but I’m just kind of looking for a final “yes, it’s normal” answer before I can try and let it go.

Go to VRM and download your data (top right, cloud icon). Compare the power reported for the Multi Input vs what the Energy meter reports. The AC loads are the difference between the two. Are you absolutely sure there is nothing there?

this gets worse the more load is coming from the grid

Is it linear? In other words, is the error proportional to the load?

Had a look at your data. It looks like the Multi reads on average 5% lower than the grid meter, so the difference grows with the load, but it is fully explainable as a calibration issue, and an incorrect estimate that comes as a result (it is an estimate in the end, calculated from the other values). Jaco and I both see that on our systems, just to a lesser extent.

Thanks for taking a look! That makes sense.

it is fully explainable as a calibration issue

Would that be on the Multi’s side or the meter’s? And anything that can be done about it?

I’m not trying to push it. I’m more than happy with writing it off as a calibration issue knowing that the impact will be a lot less with self consumption. Just curious about if it’s possible to get the calibration closer to the actual value.

There isn’t a way to recalibrate this. My guess would be the calibration is off to either side, the meter might be 1% high and the Multi 4% low or something like that. I’m leaning towards the Multi being out the furthest, just from experience.

I have put the magnifying glass down. (for that part

)
Thank you both Izak & Jaco for looking into it. This makes sense and I’m OK with it.