Eskom ... is there ANY chance? In CPT there is

Look at the date of this document…

What do you expect to change?

The SSEG program has been a disincentive to feed power back to the grid.
Do I have agreement on this before I go any further??

The cost of the Smart Meter was the biggest obstacle on the domestic front – paying back R10k just takes too long, and it wasn’t clear if you ever could, since you couldn’t go positive on the account.

But for business, a R10k power bill is nothing, so the Smart Meter cost is a tiny part of the full solar package.

The R10k meter also always costs R10k – on a 60A circuit with a 3.6kW feed-in limit, it doesn’t make sense. The same R10k meter on a much larger circuit with a higher limit, where you can write stuff off from tax, get financing and so on, change the mechanics dramatically. Even a 3ph Smart Meter won’t take the R10k to R100k.

So no, I don’t really agree with that statement. It doesn’t make sense for home users, but this isn’t aimed at us. It always made sense for large businesses, now it makes more sense for them.

I have yet to find private home feeding power back to the grid legally.

I’ve read on another forum way back of “groot manne” (baie geld) who did it.

The sums to make it viable were interestingly “complex” because of the fact that it was against the law to sell electricity to anyone unless you are Eskom/Munic. Net metering per annum the only “loophole”.

Way back then I emailed CoCT, and they replied, where I suggested:
Because we, the homeowners/businesses, having invested 100’s of thousands to be able to generate power, with spare to “sell back” (Net Metering) to the city, that they:

Then it all changed.

CoCT’s the new Mayor, leading Rama by 1-2 days ito announcements, the new Mayor following up with actions, no postponements “yet” as Rama got with Mantashe. So we will wait and see where points 1-3 lead now.

FWIW. Most of the core members on this forum had quite animated debates on this topic on another forum, years ago, when we had to register our grid-tied systems. Old tekkies now. It is changing, at last.

I know plenty of private homes feeding power back to the grid legally. None of the are in CPT, though (and none of them paid extra for a bidirectional meter).

The idea, at the time, was too new for them if you ask me.

I will concur with that, but I think we need to add that saying such a thing is not criticism. Sometimes an idea needs time to mature, for people to get used to. A big shock to the system always causes complaints (and lost votes!).

This is precisely the thing that caused the most recent Eskom blow-up. Introducing all the new goodies you want at once (a flat fee plus a connection fee!) causes a huge shock to the system. That’s why I believe Nersa will never approve it.

But if you make it like Cape Town, where you first swap a connection fee for a slightly lower block tariff, and then gradually phase it in, while also starting with the more affluent users first (you send them a letter stating that they are a good candidate for the “Home” tariff, you make it sound like they are awesome for it), then you avoid the shock to the system.

In the end someone needs to pay for the equipment, and in general the rest is just packaging. You’re going to pay for it, one way or another. Maybe, in time, supply and demand will make bi-directional meters no more expensive than the kind we have now.

Maybe, in time, supply and demand will make bi-directional meters no more expensive than the kind we have now.

I’m really hoping we get TOU tariffs (yes, yes, complicated, etc.), because then they need to replace the meter in any case, and that new meter should allow calculating export! Yey!

Now of course, with my luck, we would need to pay R10k for the TOU meter…

It is changing, at last.

I agree. I think the recent strike by Eskom employees was the last straw: The president called the power station managers into his office and asked if there was any option available other than to open up the electricity grid to competition. They couldn’t convince the president that there was and so the die was cast…
PS: This information was revealed by a secret microphone in Rama’s office!

any option available other than

And that is one of those inevitable things. Remember again that this process goes back over 20 years, to 1999 when the Mbeki administration decided to privatise the SOEs. The unions objected, stating that there would be job losses (and they are absolutely right!). Everything that happened after that just delayed the inevitable, except now it has to be rushed.

I’m really hoping we get TOU tariffs (yes, yes, complicated, etc.), because then they need to replace the meter in any case,

I think the only way there will be pressure for the residential user to not pay the meter purchase and service access fee is if the TOU change is enforced by Eskom’s suggested tarriff changes which enforce TOU rates. If not, the position will probably be one of if you choose to export you have to carry the cost of the equipment.

TOU tarriffs also include reactive energy charge. Beyond me to try any form of calculation but I am curious how residential power factor in modern homes look and how this will influence all those ROI calculations.

Also wonder how many people factor in tax on the wish for receiving “actual money” for electricity sold to the municipality?

EDIT: @mariusm, I later realised, since I quoted you it might look like I am questioning your ROI position or ability to do proper calculations - not the case by far, I am refering to the complexity of ROI in general.

how many people factor in tax

If it requires that people register for provisional tax, that ALONE might be enough to make it not worth it. I mean if you’re already in that bucket, then it makes no difference, but just the amount of money I have to pay a tax consultant three times a year would make a significant dent in any money I make from the sale of energy.

On Power factor, anything with switching supply is real bad. Most Led lights are also bad, computers, chargers for mobile devices etc, bad. Induction stoves, microwaves in general, TVs etc are bad too.

Almost all consumer electronics destined for EU will be power factor corrected. This includes TVs, PCs, Inverter aircons/pool heatpumps. It excludes small LED lights. The bigger issue is that your inverter may only generate at a power factor of unity when grid-tied. That means that all the reactive load gets offloaded to the grid. So running your lawnmower or pool pump could have some interesting effects on billing. 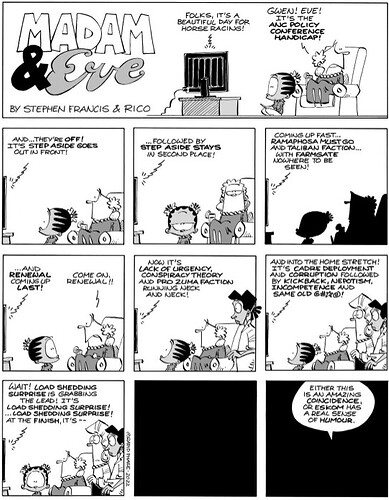 This is worth a read…

“5.9. Residential tariffs: Residential tariffs need an overhaul. IBT as a tariff structure is no longer appropriate because of customer perceptions and provides uneconomic incentives for customers installing embedded generation. Eskom proposes removing the IBT structure, into a single energy rate charge, reintroducing a fixed, more cost-reflective network and retail charges for Homepower, and introducing a TOU residential tariff with an offset rate for net billing.” 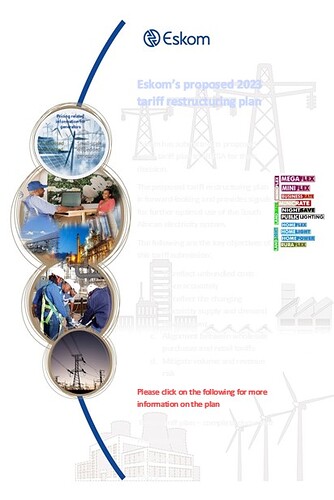 Eskom has submitted it's proposed retail tariff plan to NERSA for their decision.

Edit: There it is:

Eskom proposes the introduction of a residential time-of-use tariff, called Homeflex, for its urban residential customers. The Homeflex tariff is a dynamic tariff and a market tool that is able to support a more optimal operation of the power system while providing a benefit to customers. This tariff also provides a net-billing rate that provides compensation for energy exported.

This tariff is more cost-reflective in structure and adaptable to evolving customer needs, changes in
technology, and the changing energy environment.

The design of the Homeflex tariff is based on the proposed new TOU structure energy charges, the GCC, network, ancillary service, service/administration charges for the residential customer category, and a netbilling rate. It has the same GCC, network, retail, and ancillary service charges as Homepower, but the energy charges are TOU rates. Refer further to Annexure E for more detail.

They have obviously been working on this for a while… It will be interesting to see how Municipalities (CT excluded) handle this - especially my Eastern Cape Muni.