23 Days ago I have installed 2 Sonoff POW’s, One on my geyser and one on my Borehole. This made it possible to measure the consumption on both. It was interesting to see how little power I really use on them.

For the geyser I used a total of 53.807kwh over 23 days, that is 2.339 kwh per day. We live in a very hot area, water gets pre heated in the pipes as it goes through the roof, as well as the geyser is outside in direct sunlight. So standing losses is minimal.

I would like to see some comparisons for other areas in SA.

Amazed at the borehole values… do you use it the whole time… ie as your main source of water or do you pump and store it first? What type of pump would also be of interest

I have a header tank and so just refill on a daily basis.

do you use it the whole time… ie as your main source of water or do you pump and store it first? What type of pump would also be of interest

Hi Mark, its a 0.37kw Vega Pump hanging at 49 meters. I only use water from the borehole, I closed my Council water tap the day I commissioned my borehole about 2 years back. I pump the water into a 5000l tank and use it from there. I use a high level switch to stop the pump when the tank is full. I allow the pump to run 4 times a day for roughly 20 mins, but if the tank is full, the Sonoff will switch on, but not the pump.

It would be interesting to see how much the, 5000l to house, pressure pump (I assume) uses…?

I have that Sonoff here, will install it in the next week or so.

Okay, you motivated me enough to do it today, only to realise the pressure pump uses 1 watt constantly for its own electronics. 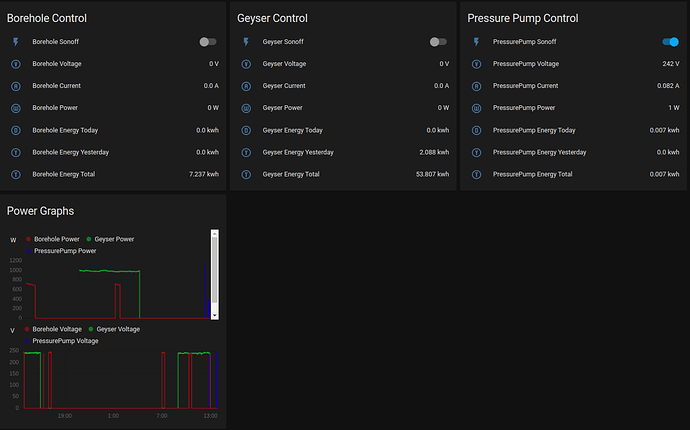 And the pressure pump uses 0.37kwh to run… 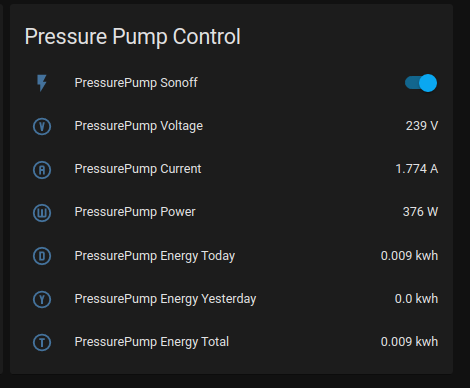 This seemed sort of like the appropriate section as it has to do with energy measurement.

Or was it the other way around? I remember reading this somewhere on the forum but cant find it now.

Now that I have no more space for panels, I’m trying to optimize to see max yield.

In theory I have a 5Kw generating capacity and the most I’ve gotten is 3,5Kw at times when the demand is there, but I’d like to see this figure reach 4Kw plus if need be.

So heeding the advice of all you knowledgeable gentlemen which is that with normal losses in a system as well as the irradiation in Gauteng I should be happy if I get about 80% efficiency of that figure, which brings us to 4Kw, which I’m not too far from what I have already seen.

But I reckon there is always room for improvement, and I have 2 strings with panels having slightly different angles. They don’t differ very much, but as per attached picture.

The circles indicates the two strings with 2 panels each. Should I bother? Oh yes, forgot to mention that these are on separate MPPTS - if this makes any difference. 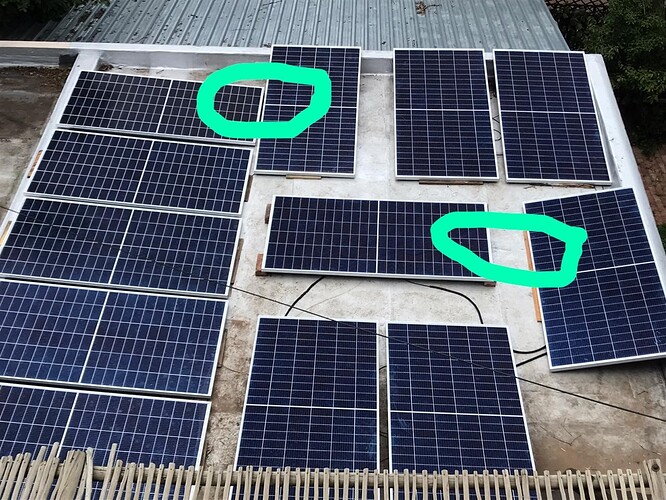 the most I’ve gotten is 3,5Kw at times when the demand is there, but I’d like to see this figure reach 4Kw plus if need be.

Lets do some calculations.

If your battery’s were discharged enough, with your current charge limit of 25 amps at 54 volts you would need 1350 watt to recharge them. Add to that the 2400 watt rating of your inverter, you could expect a maximum of 3750 watts. Lets disregard losses and panel mounting angles and the fact that you only discharge your batteries to 80% at night, I think expecting 4kw and above might be a bit too optimistic.

If you open the taps a bit on charging your batteries, and assuming they accept the higher charge current, your 4k might be within your reach.

Lithium’s on the other hand, will allow you to harvest even more…

Here’s some of mine: 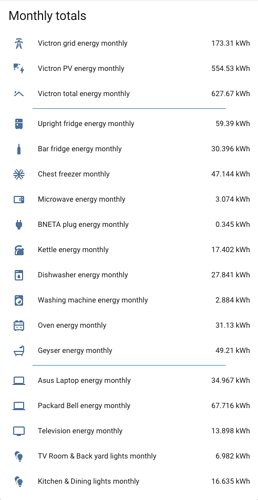 The BNETA plug is not connected to anything specifically - I use it ad-hoc as necessary if I want to measure something. Since 1 Dec, the Christmas tree lights are connected to it

The freezer surprised me a bit after running this plug for a couple of months (also a Tasmotized BNETA plug) – so much that I put a temperature sensor it it too. Turns out it seems to be running WAAAY too much, which also explains the frost buildup in side

The two laptops below are actually more than just those – screens, routers, my HA PC, POE switches running cameras, fibre ONT etc. Still, the “Packard Bell” one is actually also measuring my Macbook Pro and external screen, and I really noticed an increase when I started working from home.

My wife’s Macbook Air and external screen is the “Asus Laptop” (I know, confusing).

I too have a borehole, but I use it just for watering the garden (which I had to do quite heavily the last couple of days in December). Most of the time this runs during the window of 16:30 to 21:00 when I’ve programmed the system to run from the grid to save battery life for later the evening.

I also have a 4kW geyser, which I do run, but only if I have excess PV energy available or it is REALLY cloudy the day and the temperature isn’t where I want it – then it is from the grid. Unfortunately I don’t have the split between those two.

Interestingly, you can compare my Home Assistant measurements with the Victron VRM measurements:

I’m probably missing something in the “from solar” measurements…

EDIT: Realised as I posted this my Borehole monthly was 0 – something is misconfigured. I thus removed it and reposted the screenshot. Also figured it is time to fix some of the labels!

See I still have a long long way to go…

Please share the orientation of that flat roof… oh… and the roof at top of picture - is that yours…(carport)?

You just reminded me, i wanted to talk about this, there is panels facing in all 4 directions (or the picture might be misleading), the ones facing south definitely needs to be re-positioned. Rather avoid facing panels south, in the winter they give basically no power at all.

Add another 6 North facing on the carport at top of pic.

Aaah ok. So what you’re saying is that my limiting factors is mostly:

So if my max charge is set at 25A, would it be harmful given my specific setup to increase this to 35A?

Just curious as I read somewhere that adjusting this also adjusts the max rate it can discharge amps? Happy with the system and don’t want to tamper unnecessary, but if there wont be any disadvantages, then I’d like to increase it.

The black you’re seeing is actually sleeving in which the cables run. So they’re not directly exposed to the sun.

And yes, I’m a bit waaghalsig because my panels are not secured yet. Still thinking of a way to accomplish this as that roof gave severe leaking problems until I had torch on laid over it. So absolutely no drilling in that roof whatsoever.

I have picked up some brackets which will angle the panels, and the idea is to secure the brackets to lintels on the roof for extra weight.

At least we don’t have Cape winds here and that roof is fairly sheltered from heavy winds.

Nice A frame weighted with lintels will work well. No holes drilled.
Some like this

You just reminded me, i wanted to talk about this, there is panels facing in all 4 directions (or the picture might be misleading), the ones facing south definitely needs to be re-positioned. Rather avoid facing panels south, in the winter they give basically no power at all.

Ok so as was correctly guessed by mmaritz, the top of the picture is North.

I have since rearranged a few panels to get the angles more similar.

The problem is that space is very limited, hence the weird layout.

But yes, the green line indicates two strings that faces South, but at a very low angle. It would be easy enough to tilt these on the other side to get them to face North. The reason they face South is that they still get a lot of late afternoon sun where they are now.

The corrugated iron roof at the top is an afdak in front of my garage, and the wooden laths at the bottom is just some feature that was here when we moved in that is attached to the house. 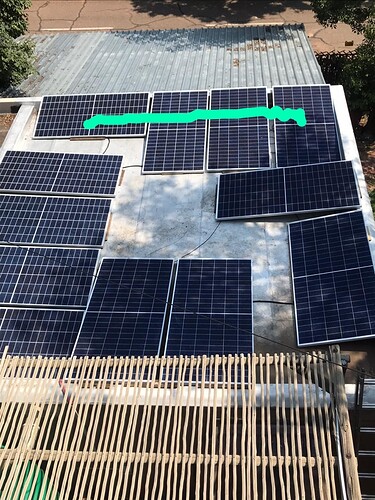