That being said - any suggestions for car batteries? Maintenance free or not? Specific brands?

I got a large number of years from from the original batteries the car came with, but ever since I get about 2 - 2.5 years from a battery. Is this normal?

Also: is there any after-market car battery monitor that’s would actually start telling you that the battery is about to die or should be looked at? The built-in diagnostics/dash-lights don’t say much. This morning was absolute chaos - getting kids out of the house and into the car for school - and then on top of everything the car didn’t want to start…

They are all ‘maintenance free’ these days…
I reckon this is an example of the consumer market: Make the product just good enough to stay in the hunt which means that it will not last forever.
I saw a comment on a forum (don’t ask me where) that mentioned a ‘deep cycle’ lead acid battery from Dixon. I’m not convinced about these but since they are a local company that has been around for years and make automotive batteries it struck me they might have carved a niche for themselves.
So I traveled miles across town to their outlet to replace my Getz battery. They struck me as knowledgeable…

They are all ‘maintenance free’ these days…

All my maintenance free batteries failed with adequate electrolyte levels, so I reckon there was no maintenance that would have prevented failure.

My recommendation would be to get a Bosch from Goldwagen. Based only on the fact that they are a reputable brand and very competitively priced (last I checked).

When it comes to car batteries buy Varta. They are the OE suppliers for nearly every premium car maker out there and they are not that much more expensive than the cheaper brands.

I’m busy replacing the E9 Varta Blue in my one car now, I think it’s done 7 years. That being said I have also given it a hard time. I never really drive that car so often it’s run-flat as I forget to put it on the charger.

For monitoring, I built this. DIY: Monitor Your Car Battery: Code & Setup : 8 Steps - Instructables
Then home assistant warns me if the voltage is starting to drop too low. Not sure if it will be useful for battery health, but a dropping voltage should be a sign that things are not going well.

This applies to all cars, mine, just being near vintage, “shows” it easier.

Suzi has a big 280 diesel engine right, takes a shiite load to turn that hunk of metal. Batteries lasting like 2-3 years.

The first hint came about when the alternator was replaced after 18 years. Yeah, they don’t make alternators like they used to.

When I saw how the guy checked it, pennies started dropping. Now I understood WHY the lights dipped when idling at night at a robot.

2nd hint came when I forgot the lights on, and the batt was dead, AGAIN. Yes, I now have a buzzer. Takes ages for any other car to start Suzy, buzzer saves those 30-60min waiting for the charge.

The battery lady I like to support confirmed that batts don’t last as long as the OEM one. Reasons are 1) the bunch of electronics in most cars today and 2) more importantly, the short trips. Not enough time to recharge the batt from the starting drain.

So one day the 2 pennies merged and I checked this. We drove around to shops like say 5 stops in traffic, when I got home I put a charger on Suzi. Low and behold, it takes a while to recharge.

So I upped Suzi’s idling for driving in town. It helps a bit, but every week I still put the charger on.

The lessons I took away:

So in lockdown time the next door neighbour of my parents gave me a call. His driving a 2012 Q5 and he needs to replace his Q5 battery, but do I have the computer to plug in to put in the battery code when replacing the battery. I’m like hhhhmmmmmmm hoe nou???

So here is the story, go check it out:

The Code is so that Battery Energy Management system can properly manage the power going into and coming out of the battery.

… the computer to plug in to put in the battery code when replacing the battery. I’m like hhhhmmmmmmm hoe nou???

Yeah, my Dad’s 1.7 diesel Nissan Xtrail, same story, he also ran out of juice during LD because of all the electronics. The Optimate charger I favor, I suspect it “damaged” the SD card in the display, the SD card having the maps on. R3.5k for a new one.

I learned that one needs to check what charger to put on these new cars. Nissan did say it should, “should” be fine.

Thanks, I will check out Varta or Bosch. I’m done with Battery Centre & Willards.

I was looking at this Takealot BM2 Real time battery monitor. Doesn’t look too bad - mostly gives you the voltage as well, so do not win/lose much in that regard. I see there are some people who have managed to decode the BLE comms between the device and the app - Reading Bluetooth BLE 12v battery monitor - Raspberry Pi Forums and some people have thought about HA integration too.

Clearly the manufacturer’s model of battery life as they added more and more electronics was cutting it fine. The product (ICE) was meant to be driven every so often (once a week?)
I owned a Renault Scenic that ran it’s battery flat on a short holiday. No chargers (or electricity) were available. A nightmare!

As an example: The previous Hilux/Fortuner with the 3-liter engine has a 668 battery, which is in my opinion borderline inadequate. On the other hand, the D-4D Corolla/Avensis of that era has the same battery for the 2-liter engine, which is overkill. The battery lasts longer in the smaller vehicle. I can always hear the battery going on a Hilux/Fortuner. There is a clear audible difference between a new battery and one that’s giving notice on the larger engine

I’ve found the batteries the cars come out with typically lasts very long. I never had to replace the battery in my Honda Civic, until it was unfortunately written-off in its 10th year. Before the I had a Ford Fiesta for 10 years, needed one battery replacement, but only because I forgot a “cigarette lighter radio” in it for about two weeks with the car being off. The Fiesta didn’t turn off its 12V sockets and so the battery was completely and utterly dead.

Though, this was my personal experience, and I don’t really drive short distances.

Speaking off. 2 Batteries have died in 2 weeks. Not crying though as they have listed a long long time. 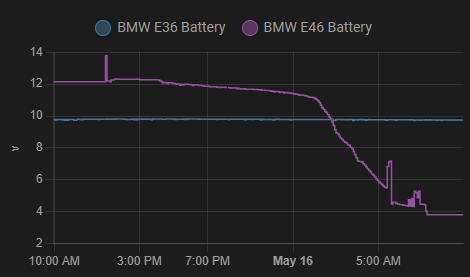 2 Varta (Blue) Replacements are about R2000 each. Silvers are closer to R4k, but I think that’s overkill.

Interesting to see how they died differently. The e36 one has enough volts to keep the electronics going, but no amps to turn the engine. The e46 one has fokall. Meantime the car did a 80km drive yesterday so the alternator would have have been charging well.

My personal experience was the same too - well, kinda. The original batteries my VW Jetta’s (I had a 1.4 TSI and a 1.9 TDI) came with lasted for ~5 years, then I entered the 2 - 3 year cycle with aftermarket batteries.

Then again, my Isuzu MU-X’s factory fitted battery lasted 2.5 years… so perhaps @plonkster is correct (smaller car vs. bigger car and the battery they fit).

Does it log the voltage when away from home and sync it all up, or is that just the real-time monitoring while your car is standing still at home?

Nope, no history when you leave the house.

Another 'low cost" and simple option is to use a small dash mounted LED volt meter, to monitor the battery whilst away from home.

I have found that you get to know the amount of voltage drop when starting your car, if you watch the volt meter. Any sudden larger than normal voltage drop will show up any impending issues. During driving, you can also monitor the charging voltage to making sure your alternator is charging the battery sufficiently.

Perhaps just calibrate the drop once by taking a multimeter to the battery while checking the 12V socket output. Probably shouldn’t change too much? You should also not be pulling a huge current…

I’m guessing this is where something like the Bluetooth battery monitor (that I mentioned earlier) comes in handy - nothing to mount on your dash (just check it on your phone, and supposedly it logs the data).

(Although there will likely be a voltage drop between the battery and the 12v outlet).

On my wife’s car, I replaced her cigarette lighter with an 12v power plug, to which I mounted a small LED volt meter. Outlet comes on when you turn the key, and is easy to glance at to check voltage. 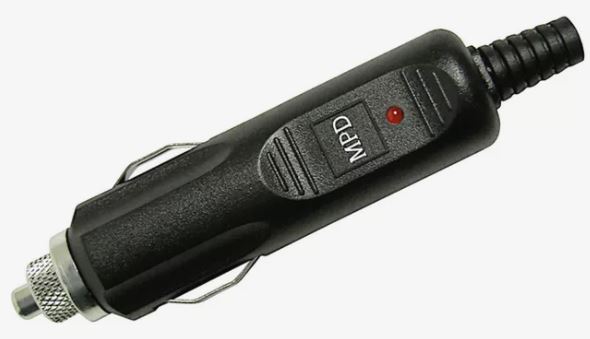 There will be a voltage drop, but what you need to look out for is an “larger than normal” drop.