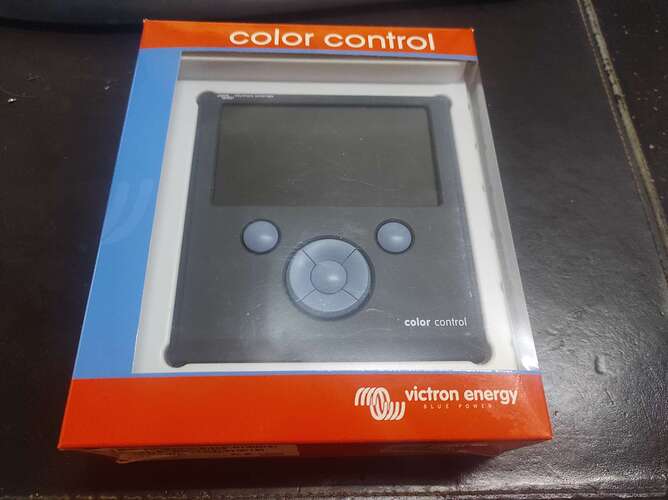 Such a pity they don’t work with the Venus GX device, else I would’ve taken if off your hands immediately.

What do you mean it does not work with the Venus-GX? This is essentially the same as a Venus-GX, except it has an LCD screen, and it lacks some of the extra stuff (such as the digital inputs and the tank/temperature sensors). IE, you would be replacing your Venus-GX with this. Although it is definitely more suited to someone in the market for a Cerbo, but who doesn’t care for the slightly older platform.

I was told that it only works on a Cerbo. Think I asked the question on here somewhere.

Definitely remember being told it couldn’t be done. Can’t remember who told me though.

And I read it somewhere as well.

No worries. Let me try to explain.

The original “GX device” was the CCGX. This is a small ARM-based board with an LCD, and they were around 8k when new.

Then Victron made the Venus-GX, which is also an ARM-based board, but without an LCD. They are about the same speed as the CCGX, but they have slightly more IO options, and built-in Wi-Fi.

Then came the Cerbo, which is also without a screen, has similar IO options to the Venus-GX, built-in Wifi, but also Bluetooth. Price is comparable to the original Venus-GX if you account for inflation.

You can buy a GX Touch, which is essentially a small LCD touchscreen that plugs into your Cerbo-GX. So that gets you something very close to the original CCGX, but with more IO and faster CPU.

So: the CCGX at a good price (which this one is) is a good option for someone who wants something like this, doesn’t need the firepower or the IO capabilities of the Cerbo-GX, and is looking for a good price.

Since we have you on hand.What about the option to use it as a remote console?

This is essentially the same as a Venus-GX, except it has an LCD screen, and it lacks some of the extra stuff (such as the digital inputs and the tank/temperature sensors). IE, you would be replacing your Venus-GX with this.

Ok I think I understand you now and also why this option was not viable for me at the time.

So you are saying this Color Control as advertised is basically a GX device on its own?

Meaning I have to substitute my Venus GX with this one? If I understand correct, then I’m not sure that it will work for me. I have so many cables plugged into my Venus (basically all slots are filled) which I am now convinced I will not be able to do with the Color Control.

I initially wanted a screen type thing like this which could plug into the Venus via ethernet and which I can operate with a keypad/touch screen.

What about the option to use it as a remote console?

If you are technically proficient enough, it can be done (by forwarding the D-Bus connection). But unless you’re a software developer (either by hobby or training) it’s not really doable

I’m sure you’d be able to. Your Venus probably only has the battery, MPPT/s, ET112, power and maybe LAN connected. I for one do not have any of the relays connected.

You can have a look on Victron’s website. They give the technical specifications and the connections each device has. That should tell you whether you can replace your Venus with a CC.

I find the screen unnecessary though, you can just open remote console on your cellphone and then you have alk the screen real-estate you could want?

That should tell you whether you can replace your Venus with a CC.

Yeah but this wont suit my needs. My inverter, batteries and everything is in the garage which is totally separate from the house. I already have a Lan cable routed from the Venus to inside the house which is where I’d like some form of direct control.

I don’t want to walk to the garage every time I need to make an adjustment and my phone is not always with me. I wanted a dedicated console inside the house with which to talk to the Venus.

I have sort of solved the problem by using an old redundant laptop with the Venus IP address permanently on the browser and the laptop stays on permanently. Was never thinking about replacing the Venus. I was hoping to add to it.

For your use case, a cheap tablet in the house is all you need. Eg one of the Amazon Kindle Fire types. R1.4k for a 7", R1.8k for an 8" screen. You also get some real cheapies, but the kindle fire is basically the cheapest device I consider not-complete-cr*p.

Or even an old cellphone which might already be somewhere in the house.

Ill take it if its still available!

Yes it is still available. PM me to arrange.