It depends on what you are planning to say

Rumour has it, that this was the reason for Pearl harbour.

What!? They insult our honour with this… this … Ford? This shall not go unpunished! BANZAI!

Seriously though. I was looking at sales numbers the other day. Based on what I see on the roads in my area, Ford must be pretty close to being at least the second-best seller, right? Nope. Isuzu is still selling more. The Ranger is third in sales. What is even more surprising, is guess who is 4th? GWM with the P80.

Since Sun vs Gro got distracted… 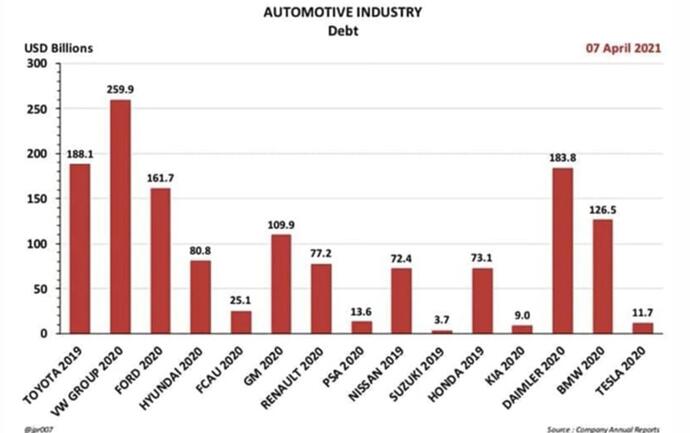 Solvency is a concern for non-Tesla car companies. The Z-score formula for predicting bankruptcy was published in 1968 by Edward I. Altman, who was, at the

I don’t think this analysis is great. We have to look at the assets of the company, not just debt. It might be that legacy car companies have finance subsidiaries (VW, BMW, Ford etc.) that effectively borrows money, build a car and then sell it on credit to a customer. So sure, they have debt, but they also have a debtor asset.

It also seems that in recently, even Professor Altman noted that a Z-score of 0, not the 1.8 as per the analysis in the article, is where you should start worrying about a company’s financial strength.

So neither the debt, nor the Z-score, in the article is particularly worrying to me.

I’m also not really inclined to care about an article making serious talk about Tesla’s market cap. I just don’t see it as being relevant. Tesla is a “cool” stock. But it being cool doesn’t mean they can actually raise a lot of cash with another share issue.

ooooooooo wait, I found this one…

What!? They insult our honour with this… this … Ford? This shall not go unpunished! BANZAI!

Many car companies can boast an avionics history in WW2.
It was the Rolls Royce Merlin engine that powered the Spitfire.
BMW still carries the circular emblem of a turning propeller.

On a side note:

The worst car I ever owned was a Mitsubishi. I suppose that was because of the company’s avionic history as well. I think both the cars and the planes were designed for one way journeys.

And then there is SAAB…

You’d think at my age, based in Europe, I’d have had the pleasure of a Swedish ride.
Sadly not yet.

I think its about the risks in the industry and the amount of investment they have tied up in legacy technology and production capacity.

Yeah, they have obviously invested substantially in the past and one can only hope that they have done their research as to whether they investments would pay off before the technology is no longer used. As far as I understand most, if not all, manufacturers have seized further research into ICE. I don’t see ICE disappearing in the next 10 years, so presumably these investments should still show a return.

There’s also a host of research that would be universal across cars, be it ICE or otherwise, so presumably not all is worthless.

I find it very strange that someone would think a big auto-maker like Toyota is at serious risk of going bankrupt, and that Tesla (who isn’t even making a profit, have terrible build quality, etc) is somehow ahead of them.

I’m not diminishing what Tesla has done, nor am I saying someone like Toyota is untouchable, I just think the real answer is somewhere towards the middle of those extremes… and slightly to the side (of Toyota).

I mean, these are the guys that made the Prius, right? And they have been toying with Hydrogen for three decades? And they have factories and distribution networks and suppliers etc etc everywhere in the world. They can retool a production line in months. And you think they won’t be able to step up to EV demand? Yeah maybe… anything is possible, but colour me skeptical.

You can make any data look good or bad if you just show the values/graphs you want to be seen.
So it normally take a bit more than one graph or a headline to concern me. Most articles are looking for sensation to make you react (for some gain to them either buying the newspaper or making the market go up/down)

Out of intrest the amount of R&D funds Toyota spends each year is $10billion. Kleingeld

You can see the latest date in my Just have a think posts.

yes, I had a decimal to few on that one. Went back and got google to convert the values from Yen to $ for all of them to make sure I did not make another mistake