Need help with getting start in solar

and I have a Delta purchased earlier.

Please provide info on this UPS.

Please provide info on this UPS.

I bought mine from Flexopower between load shedding blocks. See the price has gone up dramatically.

Forgive me for being confused…
For those who have been in electronics (especially power electronics) for decades when someone mentions the name Delta this is the company that springs to mind: Delta Electronics - Wikipedia
Briefly a heavyweight electronics company in Taiwan making excellent products (and often making these for other companies to build into their products!)

The do make excellent stuff. I have three of these in a testing system. 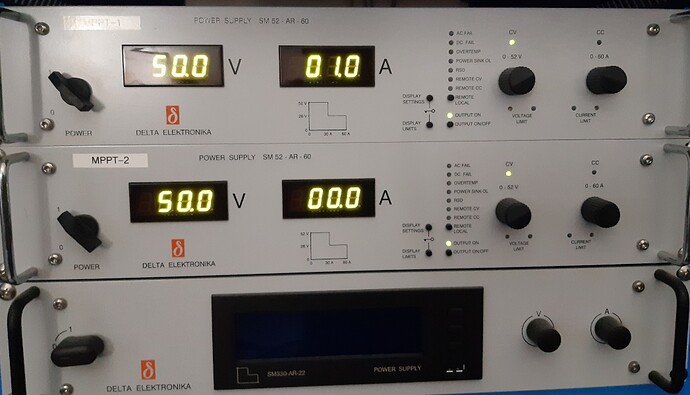 Ok so I have got hold of a few solar installers and getting quotes but hoping some of you can shed some light on some of the options I have received as everyone seems to be suggesting different things.

I will probably have more questions but baby steps, I find that asking the questions normally lead me to still not really understanding but find out that there are more questions I didn’t know that I need to ask

(eg: Deye/Sunsynk/Fusion being the same but different in more then just the name).

Thanks in advance,
Luc

I will probably have more questions but baby steps, I find that asking the questions normally lead me to still not really understanding but find out that there are more questions I didn’t know that I need to ask

Indeed!
As you find your way I suggest you find someone with the unit you like and go and have a chat with them. (Any owner of a system will be happy to talk the hind leg off a donkey about their system…)

Add in two good batteries and you are not far off a really nice inverter-generator, such as this one (I’ve seen this model for around 13k at a Builders Warehouse).

So how does that work? Do you keep the generator outside and then tie a rope to the pull cord and loop that through the office window?

Cant help you much on the inverter side.

For batteries, the SolarMD units look really good but they are expensive. Hubble has a NMC battery that is widely promoted but it’s new in the local market with a tech that doesn’t seem to be great for longevity. Personally, I think people just want to put wheels on their house and drive them as no one else really seems to be using automotive batteries for home use.

I decided on the FreedomWon ETower based on price/features. FreedomWon has been around a long time and the warranty looks solid. Being modular means that it’s easy to start small and scale-up. This was important to me.

So how does that work?

Some of them have both. Small 12V battery on the side (about 22Ah usually) and you can remote-start it, but it also has the rope in case the battery is dead. Which it usually is after a few years…

Hi Supaman and the entire community.
This is my first post & am very happy to be able to contribute on this platform where I can.

I run a residential and commercial solar installation company in Gauteng. We specialise in Voltronics inverters as well as Lithium iron phosphate batteries.

Many people are in the same shoes as you with dunno where to start done know who to trust. If you were in Gauteng, I could have assisted, however, the Mother city is a far away place & think you guys suffer from the CofC dictated list of Inverters.

As far as what I can see the Voltronics inverters can be added to the list, it just needs approval and testing. If I was in CPT I would pursue such an endeavour. However, we may make this happen for the use of these inverters in CPT.

Let me say my humble apologies to the community or the MODS if my post is out of line or not allowed in this way. I am more than willing to be made aware if a commercial company as ours needs to pay a subscription to be listed or make such a post.

I however, am in the capacity to assist and help anyone individual with whatever, kit they may be struggling with or offer any advice or assistance in anyway possible.

However, I don’t know it all and am ultimately a learner of things just like everyone else on here.

Thank you Deon, how is that Solar MD unit of yours treating you??

My apologies I think I am mistaken you with your buddy whom bought the unit from me.

Did you eventually get rid of your Lead Acids?

how is that Solar MD unit of yours treating you??

I wish … No, Ryeman grabbed it before I could buy it. But, I grabbed his old Axpert system, which Jaco installed for my daughter at her new house, so it all worked out in the end.

Currently pulling the trigger on a 8KW Sunsynk, as the Goodwe is just a hair too small for two houses. I have one house empty and busy looking into converting it into a B&B, so I need a bit more watts.

Yes I thought we had a discussion & yes Reyman was the very lucky recipient.

Great battery, just I think that they lacked some solid support for the Voltronics community.

The Sunsynk is grabbing a lot of market share. I still think especially with the newer more powerful Voltronics inverters that I have witnessed especially the newer 10kW MAXll we can only win as consumers.

I also have an Air BnB home in Fourways & we have a humble MKSll on duty with one of our in house made battery 6kWh batteries.

Always good to have an insightful mind.

Thanks for the response Calypso.

The unfortunately no ones has quoted me for FreedomWon, that is why I asked for the comparision between the hubble and solar md.

I will look into the FreedomWon though and ask if it is an option.

… think you guys suffer from the CofC dictated list of Inverters.

As far as what I can see the Voltronics inverters can be added to the list, it just needs approval and testing. If I was in CPT I would pursue such an endeavor. However, we may make this happen for the use of these inverters in CPT.

Many of us here have been through this debate, on another forum, over years, yes years, debating Axperts and how they can fit, or not, into the SA National SANS/NRS regulations.

CoCT, I’ve heard, is actually looking into on how to make Axperts fit into the National NRS/SANS regulations.

Also, as a side bit of info, l once emailed Voltronic wanting to buy 10 000 inverters. Voltronic told me, nope, Axpert range is sold as off-grid inverters.

And it is not, your word, CofC list of inverters, nope, CoCT was nice enough to summarize a list of Nationally approved NRS certified inverters … as it is national regulation, these SANS and NRS regulations … and such a certification cost a shiitte load of money to get. Euro 7000 was once mentioned a few years back.

What has been deduced over all those years, Axpert go or no go, it all depends on how jacked the municipality is, or not, under which one falls ito how strict they are to enforce these regulations, or not.

And where Eskom is supplying the power, that is another set of dramas’ pending IF / when they ever get around to enforcing these national regulations, or not.

Just a thought or two to ponder on.

The bottom line, for newbies, just know that there are like ±R6 500 fines at stake with/and/or probably forced removal or disconnect from the grid, because someone at the Munic got a short-sighted brainfart to make some extra “cash” with fines or maybe to avert a reduction in Munic’s electricity income, thereby making a move to enforce the national NRS/SANS regulations on people with unregistered solar panels on their roofs.

Jip, there are some around that had to face fines and/or forced removals/disconnect … you cannot argue with an empowered civil servant on a mission.

Another tidbit I can share. If it was not for me being forced to register, do the test as per the CoCT application, we would never have found the faulty earthing on our DB. There are hidden gems in regulations too, to be able to grid tie into ones DB.

Great in sight and thanks for your reply. I think, a very deep look into this subject will need to be done by my team. Voltronics does make off grid type of inverters but then again, they also make Grid feed capable inverters too.

Infinisolar is an Axpert or Voltronics made machine. It is the closest machine that compares to a Sunsynk. However, this range is 3 phase capable and comes in 5, 10 and 15kW flavours. It is on the Heavier regulated Aussie list of approved devices as well as a few European lists including in Germany.

They also have some Single phase grid tied other country approved machines. This approved list will be tackled, as you said never underestimate a civil servant to prove a point.

I guess my argument will be the reverse: Never under estimate persistence and vision especially when it is backed by large corporations with large pockets.

This is on the cards…CofC will be challenged and the humble Axpert will find its way purely based on the budget of there products.