It’s not rocket science. I showed him the equipment and he asked a lot of good questions that showed familiarity with everything so I’m inclined to believe him when he says he’s done lots of installs. Anyway, the price is good enough to take a chance.

I have a couple of Zimbabwean builders working at my place at the moment. They are sharp!

I also love the sound of the Shona language. And the way they call each other. They don’t say “hey!” or something like that to get attention, they shout “Hallo!”. The local South African guy is called Chris, but they call him something that sounds a bit more like “Crease”. Love these guys…

I did something similar. Found a guy in Facebook and project managed him with splitting the DB, installing the inverter, connecting the batteries installing and pv combiner boxes. The only thing I did myself was install the panels and connected them to the combiner.

Ended up costing me less than R8k.

Here is the regulation as written by SANS.

a) alternate supply that consist of a combination of an internal combustion
engine or a turbine, hydro plant, wind energy recovery installation or any
similar source of mechanical energy and an alternator or a d.c. generator;

c) static UPS systems that consist of static inverters with batteries as the
standby power source (with or without bypass facilities).
d) installations similar to those in 7.12.1.2(c), but sourcing energy from
photovoltaics or other sources."

“7.12.6 Additional requirements for installations where the alternate
supply system provides a supply as a switched alternative to the main
supply (standby systems and UPS systems that incorporate bypass
switching)
7.12.6.1 Precautions that comply with the requirements of 6.9 and 6.16 for
disconnection shall be taken, so that the alternate supply system cannot
unintentionally operate in parallel with the main supply where the supply to the
electrical installation is supplied by a supplier.
NOTE 1 Suitable precautions can include
a) an electrical, mechanical or electromechanical interlock between the operating
mechanisms or control circuits of the changeover switching devices, or
b) a system of locks with a single transferable key, or
c) a three position break-before-make changeover switch (also refer to note in
7.12.3.1.3), or
d) an automatic changeover switching device with suitable interlock, or
e) other means that provide equivalent security of operation, or
f) an inverter (if it complies with IEC 62116).”

You decide if a UPS would be OK.

d) an automatic changeover switching device with suitable interlock, or
e) other means that provide equivalent security of operation, or
f) an inverter (if it complies with IEC 62116).”

And that is a debate I’ve had numerous times

The Axpert will not comply with IEC 62116 because that is related to anti-islanding, which has to do with inverters that can run parallel to the grid, which exludes the Axpert. So it needs to comply with one of the other two.

The inverter incorporates a changeover switch. This completely disconnects the grid during islanded operation, but it is not clear to what extent it is “suitably interlocked”.

I remember the early schematics showed that live and neutral are switched by two separate relays. On the newer models, the neutral relay is a double-throw, with the other end connected to earth, to create a TN bond during islanded operation.

The neutral side of the inverter is never disconnected. The live side has a relay.

As far as I know, there is no physical interlocking between the inverter and grid relays. It is at best electrically interlocked.

As I understand it, there is one more possible loophole: If the inverter firmware does a voltage/impedance/relay test to make sure the relay is open (eg, by passing a small DC current through it) before it engages the alternative power.

Since these are all unknowns, the only remaining option is a physical changeover that you have to manually operate. In other words, you lose automatic change-over capabilities. Alternatively you can install an approved automatic changeover switch, which costs almost as much as the inverter itself.

Edit: Thought of another issue. The inverter runs the final stage “in reverse” to charge the batteries. So technically the transfer switch does have both sides closed at the same time, which technically means it needs NRS097 testing and approval. From what I heard from the Ausies who reverse-engineered the thing, the body diode of the FETs are used to create a rectifier that moves energy from the grid to the high voltage DC bus, and from there it is pushed to the battery through a buck/boost stage that is controlled by the microcontroller. Which means the only thing standing between the battery and accidental feedin into the grid is software.

Make no mistake, if the grid is alive at the time of such a software fault, the results would be spectacular.

My honest opinion is that the Axpert is not worth the risk of a failed inspection. Not only because I represent another brand

Maybe but that would make every inverter trolley out there illegal. Which would be weird as they’re all SABS approved and stocked by major retailers. And what about regular old UPSs, the kind we we had on desktop PCs, highly doubt they’re more advanced than an Axpert?

As long as it’s not a part of the installation (ie hard-wired in) nobody cares about it.

Do they even exist still?

"Make no mistake, if the grid is alive at the time of such a software fault, the results would be spectacular."

Very good post regarding the Axpert units. I do not understand it all but most I did.

Bottomline, I do not sell them to client, will rather lose a job. Did a few for customer’s who have bought there own but as I mentioned, no COC.

As long as it’s connected, whether it sits on a plug or next to the DB makes no functional difference from the grid’s POV.

no functional difference from the grid’s POV

Oh I know. If it was up to me I’d ban Axpert’s beyond the plugpoint too… but then I’d have to ban every cheap UPS and that would just become a slippery slope

I actually don’t think the Axpert is complete rubbish. Given it’s price point, it’s actually quite good. The design itself (electronically speaking) is quite modern. The execution is a tad cheap on some of the components, but there are worse options out there. I just find that it is perpetually in that grey area where one is never quite sure if it ticks the boxes…

Ok hit our fist hiccup. I got the Renusol mini mounts for corrugated roof. As far as I’m aware they only support panels in landscape orientation. The brackets must be mounted along the ridges of the roof plate with the clips on top and bottom of the panel.

These guys mounted the mini brackets across the ridges in order to mount the panels in portrait with the clips on the sides. One side of the bracket is screwed into the truss at least so it’s better supported but as this is not according to the design of the brackets I asked them to take them out and mount in landscape. Now they will have to put screws in all the empty holes.

Yeah. Middle of a bathroom install this side. I bought extra tiles, as you do. Almost all of them have been used to fix stupid stuff. CTM has no more stock of that tile. So the ideal of having one box left over to retile a shower wall one day, when you need to do plumbing work… gone. A retile is now required in future…

But that makes no sense, hope they understand how to install the rest.

Giving them the benefit of the doubt, Renusol does make one for portrait orientation that works like that, but each bracket has 4 bolts then and it’s only for trapezoidal metal roofs, not corrugated. 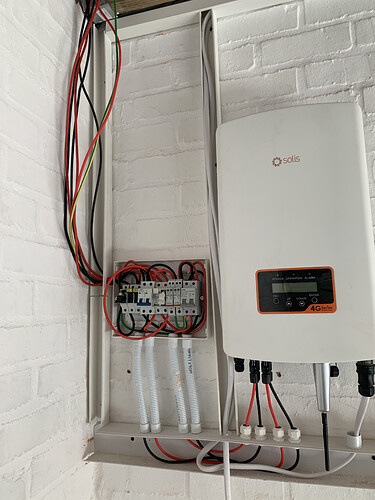 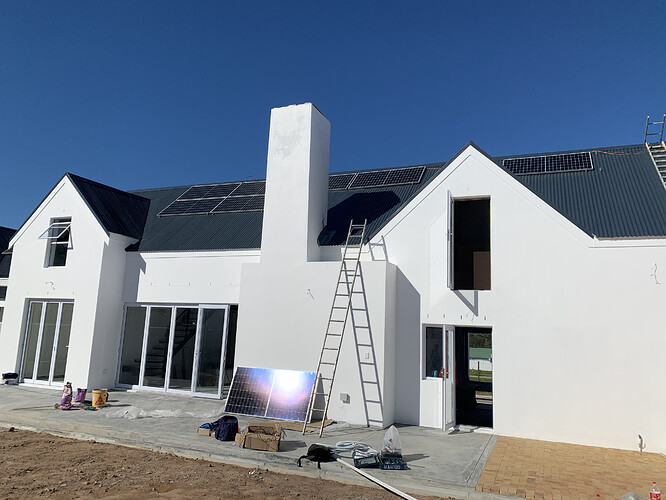 Install is looking good. Eskom isn’t connected yet so they’re coming back to finish up in a couple of weeks.

Very nice house! You are going to hate that chimney…

You are going to hate that chimney…

I was eyeing that chimney as well

But it does seem to miss the bottom of the PV by a few cm and this is around the worst angle of the year. Not so sure about the right panel in the lower row though.
It’s still much better than being in a permanent shadow for 2 months of the year…

I have a chimney on the North side of my West facing panels… I absolutely hate it, but can’t move it. If I ever build a house from scratch, I’ll have all roof extrusions on the South side of all North, East and West facing roofs and I’ll be orientating my roofs to face the actual directions… not like now where my East roof is actually EESE.

If I ever build a house from scratch